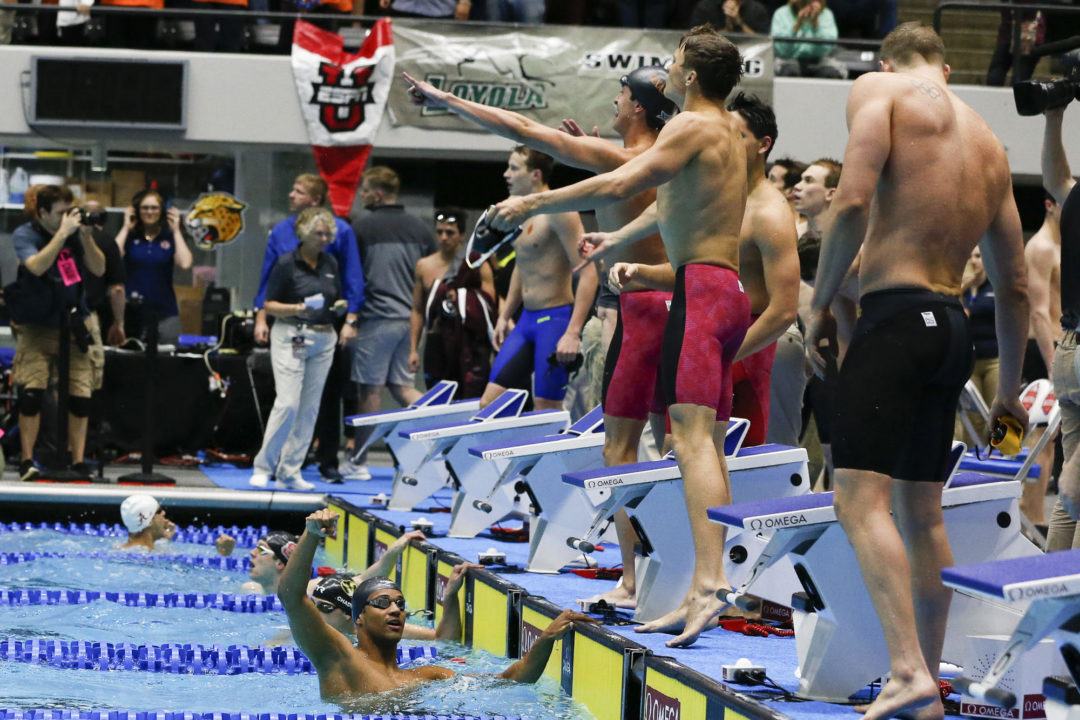 Texas and Alabama broke the 1:22 barrier en route to the fastest two 200 medley relays ever tonight at the 2017 NCAA men's swimming and diving championships. Current photo via Tim Binning/TheSwimPictures.com

The Texas Longhorns and Alabama Crimson Tide both finished under the US Open record in the 200 medley relay tonight, smashing through the 1:22 barrier and slamming down a pair of 1:21s on the third night of the 2017 NCAA men’s swimming and diving championships.

Coming into this week, California looked to be the favorites based on their swim at Pac 12s, but the writing was on the wall after the Longhorns broke the US Open record in the 400 medley last night, especially when you looked at the opening 50 splits for each swimmer, which added up to a 1:23.85.

Tonight, sophomore John Shebat, now the third-fastest man ever in the 100 back, led off the ‘horns in 20.84, putting Texas in 3rd behind Alabama and California.  Senior Will Licon, who had to convince coach Eddie Reese to let him “swim down” to the 100 breast two years, blasted a 22.92, and junior Joseph Schooling followed with a 19.45 to give Texas the lead.  Fellow junior Brett Ringgold anchored in 18.34 and stopped the clock in 1:21.54, the fastest time ever.

The Alabama Crimson Tide squad of Connor Oslin, Pavel Romanov, Luke Kaliszak, and Zane Waddell was also under the previous mark, touching in 1:21.89.

Until tonight, the Michigan Wolverines owned the fastest time ever, a 1:22.27 from the 2013 NCAA championships.  Miguel Ortiz, Bruno Ortiz, Sean Fletcher, and Zack Turk.

Schooling was 19.3 last year and quite a few guys gave been faster than 22.9. I think Peter Stevens might have the fastest at 22.6 but I might be forgetting someone.

Didn’t see the ‘all-time’ initially. Fastest fly spilt was 19.3. No idea about Breast

20.39 is flying. Shame they didn’t have Kristian

It wouldnt have made a difference. his 18.0 would have still put them in 2nd. On a different note, I legit thought Oslin went past 15 on his start seeing how far he was ahead of everyone including Murphy.

CARTMAN I thought I saw the Bama’s backstroker go past 15m on the first 25 as well.

How do you mean? His name isn’t Josa

Thank you. I looked back at the replay to make sure I wasn’t seeing things. People were pointing at him in the stands for it. Huge compliment to Zane for stepping up like that tho.

Vote Up4-2Vote Down Reply
Fight On

You realize he has yet to reach the 15m marker in that picture, right? haha

You realize there are multiple pictures on there sowing the lead up to the mark and when he comes up past it right? Haha

Vote Up2-6Vote Down Reply
Fight On

The 15m violation isn’t determined from the marking on the lane rope. Those are highly variable and can be inaccurate. They are determined from a mark on the side of the pool, which definitely can’t be seen in any of those photos.

Who are you? Faking a screen name ain’t cool mane

Oslin did not go past 15. The images you are posting are from behind him. From a wide angle. He’s clearly up before.

You can see his head still hasn’t broken the surface by 5.6, and the first frame it does is 5.7, at which point he is significantly past 15m, and it isn’t close.

The officials right foot is on the mark and clearly would’ve noticed if he hadn’t broken the surface. Haters gonna hate and I’m a Gator grad!!!!

This is like showing the back angle to review the line of scrimmage at a football game. It shows nothing.

You keep posting a photo where he’s already taken one stroke.

You keep ignoring irrefutable evidence. After our “conversation” in the other thread it seems like you are either trolling or are mentally ill. But here, I will continue to present evidence: http://imgur.com/j09MbiP At 5.6, his head is definitely still submerged. You can plainly see the water running well over his head and face, and his nose and his goggles trailing bubbles because they are both still under water. He is already past 15m, still submerged. http://imgur.com/t4dfM4f Here, at 5.7, is the first possibility of his head breaking the surface. You can still see bubbles coming from his nose which stays submerged at this time. But I will give him every benefit of the doubt and say his forehead could have… Read more »

It doesn’t matter that his head isn’t up at 15. If he is remotely close, as in his nose is a centimeter about the water then it’s clean. It doesn’t matter anyway. That time will stand as the 2nd fastes 50 Back of all time.

He was several feet past

You keep posting pictures from ESPN with an angle that means nothing, look at a video from the stands and you can see he’s right there and it’s not a DQ

Are all four members of Cal’s relay American? If so, they set a new American Record, right?

Pawel Syndek, their anchor, is from Poland, so no American Record.

Sure… lots of Americans named Pawel

Haha. Fair. I should have checked before commenting. My b