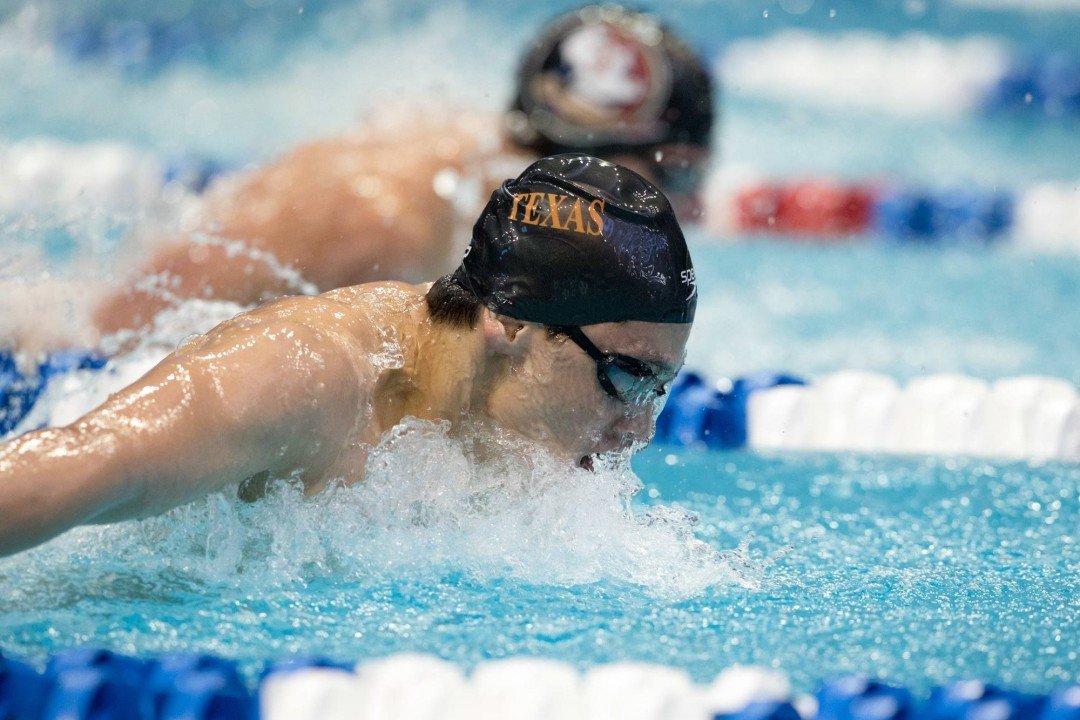 Joseph Schooling led prelims that year with a 45.04. That time would have place Schooling 14th in this morning's prelims, putting him solidly in the 'B'. Stock photo via Tim Binning/TheSwimPictures.com

That’s a big bump in just one year, but we can do one better for you. Texas famously qualified 6 swimmers for the ‘A’ final of the 100 fly back at the 2015 NCAAs. It was an incredible feat to be sure, but what if we told you the 100 fly has gotten so fast in the past 7 years that none of those Longhorns would have made the top 8 this year. That’s right, zero.

Joseph Schooling led prelims that year with a 45.04. That time would have place Schooling 14th in this morning’s prelims, putting him solidly in the ‘B’ final. This morning, Cal’s Dare Rose placed 16th with a 45.16, meaning the 45.17 Jack Conger put up in 2015 would have put him just out of the ‘B’ final this year.

Incredibly, that means that not only would that famous Texas 100 fly squad not have put anyone in the ‘A’ final this year, they would have put one swimmer in the ‘B’ final, and that’s it.

The depth that has developed in the event is shocking. In 2015, Matt Ellis took 8th in prelims with a 45.92. This morning, that time would have placed him 34th. We can also see how much the sport has developed across the board based off this morning’s results. The 8 swimmers who qualified for the ‘A’ final tonight represent 7 different programs, a far cry from the 3 programs that were represented in the ‘A’ final in 2015.

A big part of the faster times is the international nature of the NCAA meet these days. It is not just American athletes any more. Colleges are casting a wider net and offering scholarships to international students. How many of the top 8 were born in America?

Originally I was disappointed that Ryan Hoffer didn’t use the 5th year, but it turns out he was really smart to walk out on top rather than deal with the storm of speed carnage that is the 2022 meet. Shaine Casas too, adding them to this meet would have boiled the pool and potentially killed hundreds.

Don’t get me wrong, the results are very impressive. However, I think any time you look at a 6-7 year period of time at the NCAA level you see similar results of overall improvement (the fastest times stand out, but the rest of the field improves and eventually passes what once was extraordinary).
As an easy example, 19.81 got you into the consolation finals of the 50 Free in 2002.
In 2009, that number was 19.27 (admittedly, tech suits might have played into this improvement a bit).

A huge part of this remarkable comparison is how today’s depth requires going all out for even the fastest guys in prelims. Hugo’s 3:34 and almost all of UT’s morning swims Thursday are good examples.

A few years ago the top guys could save something for finals, but that’s risky now.

“Hey remember when that one team did something never before seen at a meet before? Yea, now we can tell them it’s worth nothing.”

This seems to focus more on devaluing what those swimmers did during that time period, rather than supporting the direction that the sport is going BECAUSE OF THEM. Smh.

Incredibly, that means that not only would that famous Texas 100 fly squad not have put anyone in the ‘A’ final this year, they would have put one swimmer in the ‘B’ final, and that’s it.

OK so this isn’t just 5th years making this meet so fast.