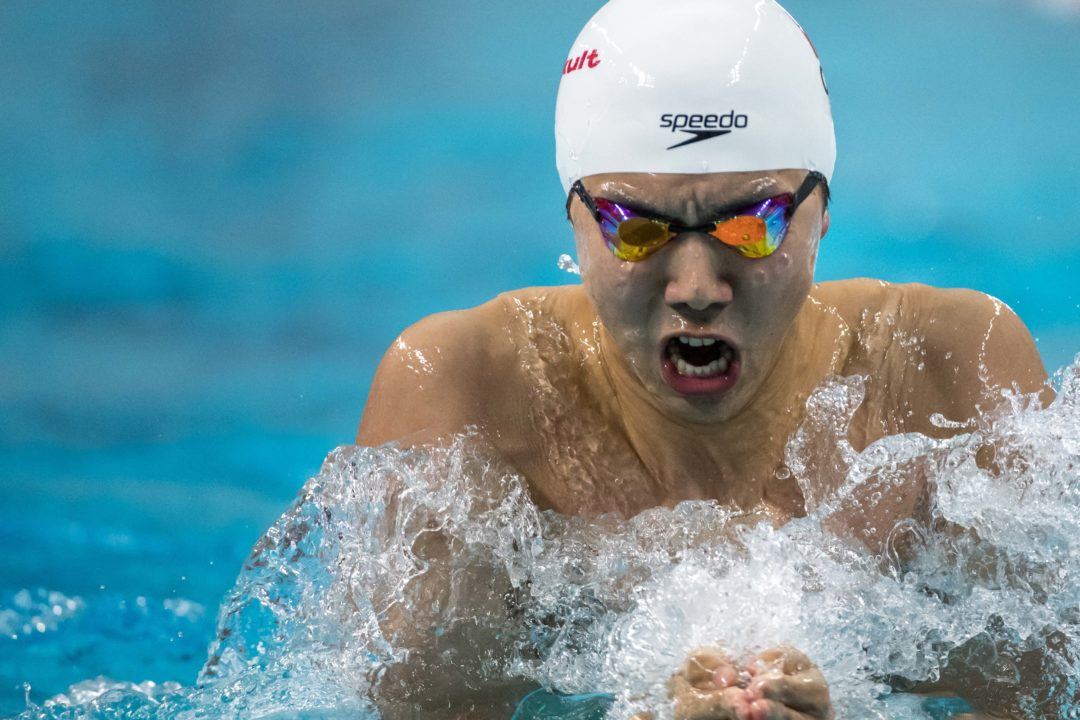 Yan Zibei is one of a number of men who could be higher on this list if it weren't for Adam Peaty being such an overwhelming favorite for 100 breast gold. Archive photo via Mike Lewis/Ola Vista Photography

As we crack into our top 50, we’re starting to see some themes arise in this next batch of ten swimmers. A number of these guys are one-event standouts, but in events where there’s already another clear gold medal favorite. That forces a tough balance between swimmers with a high likelihood of a single silver or bronze medal vs swimmers with a lower probability, but perhaps a higher ceiling of multiple medals.

#50: Felipe Lima, Brazil –Lima was a 2019 World Champs silver medalist, but in a non-Olympic event (50 breast). He’s a decent long course 100 breaststroker, though, and a good ISL scorer.

#49: Andrew Seliskar, United States – internationally, Seliskar has mostly been confined to the 200 free, where he’s won a handful of relay medals. But Seliskar had a great 2020 in the short course IMs and could see his NCAA versatility start showing up on the world stage with a good 2021.

#48: Vladimir Morozov, Russia – the Russian sprint king had a pretty lackluster 2020 in the ISL, but that appeared to be at least partly fueled by a lack of pool access during the pandemic. Morozov is still a high-level sprinter in multiple strokes, and should be an ISL/World Cup force in 2021.

#47: Wang Shun, China – Wang was the Rio Olympic bronze medalist in the 200 IM, and finished 2020 ranked #2 worldwide in the 200 IM and #3 in the 400 IM. The men’s IMs look fairly open in the post-Phelps era, and Wang maybe has one of the higher multi-gold-medal ceilings of anyone in this range.

#46: Luca Urlando, United States – college freshman Urlando has been a rising butterfly star for the past several years, and the stars are seeming to align for a solid Olympic run this year. A dislocated shoulder sidelined Urlando for a time last year, but the Olympic delay gave him even more time to get healthy and to train with a Georgia staff well-acquainted with putting swimmers on the Olympic team.

#45: Tamas Kenderesi, Hungary – Kenderesi ranked second worldwide in the 200 fly in both 2019 and 2020. That included a big win over world record-holder Kristof Milak at Hungarian Nationals in December. Both Urlando and Kenderesi face tall tasks to win gold, but should be top medal contenders in the 200 fly.

#43: Yan Zibei, China – Yan is one of the best breaststrokers on the planet. The only reason he falls out of the top 40 is that he’s pretty much a one-event Olympic threat, and that event has a clear-cut gold medal favorite ahead of him. The #7-ranked 100 breaststroker of all-time, Yan should be a strong candidate for a minor medal.

#42: Shaine Casas, United States – Casas could very well have surged even higher on this list with a more normal 2020. He was in line for some smash performances at the canceled NCAA Championships, and was really starting to pop in long course backstroke. Making the Olympic team might be his toughest test, but Casas has a legitimate shot at an Olympic medal if he can make the team.

#41: James Guy, Great Britain – Guy was the 2015 world champ in the 200 free, but has never surpassed the 1:45.14 he went to win that gold medal more than five years ago. He’s more recently surged in the 100 fly, though the 200 free is now looking much more open at the Olympic level than the fly.

I hate to be one of “those people” who gripes about rankings saying “why is this swimmer ranked higher than that swimmer?” But Seliskar and Urlando ranked higher than Kieran Smith is shocking to me. I’ve been watching swimming for decades and Kieran Smith seems to be what USA swimming desperately needed to light a fire under USA swimming’s freestyle group’s butt! Maybe I’m wrong, time will tell… but I think USA freestyle is going to have the best 4×200 showing in history and it was sparked by Smith. We’re finally going to see a 1:44 again this year and a couple 1:45’s because that’s what it will take to make that relay.

He hasn’t got the results outside of SCY to be ranked any higher.

You think that the University of Florida is going to rest its swimmers for the Olympics, let alone the OLYMPIC TRIALS? HA! Mortal. The University of Florida rests its athletes for no less than the intergalactic championships, and even then only on rare occasion. Lately, after learning that the multi-verse theory was the new leading theory for quantum physicists, they’re preparing for the trans-universal championships.

But in all seriousness – if we believed Florida people about when their athletes were rested or not, they’d all break World Records every year. And they don’t.

So which of those results indicate that he could be a medal contender? None.
In the 200 free tons of guys have been faster than him in the past 12 months and Hwang for example is younger than him and still already faster. In the 400 free there are also lots of guys who have been faster than him in the past 12 months. De Tullio for example is pretty much the same age and already more than 2 seconds faster. Smith would have to drop at least 4 seconds to compete for a medal in the 400 free. In the 200 free Hwang is younger and faster, in the 400 free De Tullio, Neill and Zsombori are younger/about… Read more »

Reminder: many swimmers of the same age of or even younger than Kieran Smith have faster 400 free pbs than him.

And breaking Grothe’s SCY record by about one second doesn’t translate in to a 3:40 LCM for me.
We all know Grothe was never close to the podium in 400 free. Best finishing was 7th at Worlds. 🙂

He hasn’t proven he has Olympic medal-worthy LC times, but it certainly looks possible if given the chance.

I love when people argue about a ranked list forgetting that the list is just one person’s opinion.

James Guy should really try to go for the 100 fly. He can definitely make the final and if he manages to have a perfect race he is a serious contender for a bronze and maybe even a silver.

He is in a very “strange” position. He could medal in 3 different events (200 free, 400 free and 100 fly), but probably he would have to focus on one event to do so. At the same time he doesn’t have a shot at gold in any of those events, while GB might have a shot at gold in the medley relay and the 800 free relay, so it might be his best option to train for the 200 free and 100 fly, which of course would mean that he would have a smaller chance for an individual medal. It might be his best option to “sacrifice” his individual medal chances for his relay medal chances.

I think he has alteady made pretty much this exact decision. He doesn’t swim LCM 400 Free anymore.

I mean, we cant forget GB chances in the 4x100m medley. So his focus on 200 free and 100 fly should be taken for granted.
I wish he could get back to his best and finally break the 1.45 barrier, he was so close so many times..

5
0
Reply
Will 37
Reply to  Khachaturian

Guy impressed me with his fly leg next to MP in 2016, which probably is the swim that gave him the confidence to swim the 1fly individually in 2017.

@bradenkeith how come Casas gets ranked higher than urlando? Seems as though urlando is a shoe-in to make the team with a very good shot at a medal. And while Casas has a chance at a medal his chances at making the team are going to be harder than Luca’s.

Luca has more unknowns. His injury was more serious than Shaine’s was. Luca has a change of coaches as well.

Both have PBs that would have medaled at Worlds in 2019.

Big thing you are forgetting, Luca is training in a program that trains for the Trials and Games. History has proven that.

If we are looking at swimming beyond just the Olympics, Casas is a no-brainer. Very similar talents in the NCAA format, but Casas is better all around, including maybe even the 200 fly.