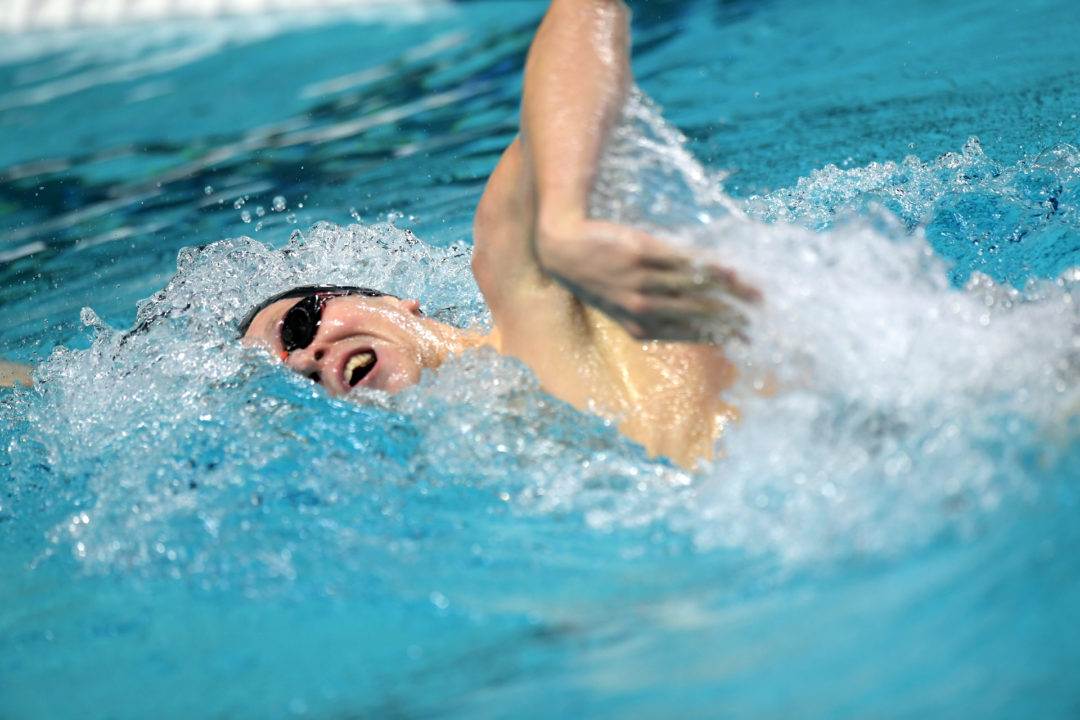 The documentary “The Weight of Gold” shows there is a pressing need for mental health resources to be implemented in pursuit of optimal performance.

In last week’s poll, nearly three-quarters of voters picked the Virginia Cavaliers as the favorites to win the women’s NCAA Swimming & Diving title.

What I’ll Miss About COVID-19

With many indoor pools closed throughout the pandemic, swimming outdoors in frigid temperatures has brought joy (along with blue lips and chattering teeth).

Shouts From The Stands: Sometimes Holding On Does More Damage Than Letting Go

“This life lesson is something that I am just starting to come to terms with…swimming was what taught it to me.”

We’re kicking off the year 2021 with a countdown of the top 100 women and top 100 men in world-level swimming heading infto the Olympic year. We’ll break down the list into multiple installments, so stay tuned as we continue with our lists.

This group starts to get into the real serious medal contenders for the Tokyo Olympic Games. Included in this group are a number of both 50 freestylers and distance swimmers.

In the case of the two 800 medalists, Henrik Christiansen and David Aubry, there’s a lot of uncertainty in their primary event, the 800 free, and what’s going to happen now that it’s an Olympic race. Yes, we knew going into Worlds in 2019 that it was going to be an Olympic race, but now everyone’s had two years to train for it. The Mack Hortons and Gabriele Dettis coming up from the 400, plus Florian Wellbrock and Mykhailo Romanchuk coming down from the 1500, these rankings are as much a ‘hedge’ on that as anything.

In other cases, like the 50 free with the shared silver medalists from the World Championships Bruno Fratus and Kristian Gkolomeev, plus British breaststroker James Wilby, it’s not that their medal chances that drive them down out of the top 30, so much as it is the confidence in the swimmers ahead of them (Dressel and Peaty, respectively) to win gold.

The sprinters are further impacted by the return of one Florent Manaudou, the 2012 Olympic gold medalist in the 50 free, who looked really good in the last ISL season. Not just ‘won races’ good, but looked confident, looked fast, looked in full race mentality.

We also start to dip into the deep field of men’s 200 breaststrokers. When looking back at this list, some of them will wind up being overrated – but with so many swimmers knocking at the door of the World Record, it’s hard to keep them much lower than this.

#40: Townley Haas, United States – Haas has some big choices to make headed into the summer. Does he focus on the 100 and 200 free, with the medals that those races will bring, plus the goal of individual glory in the 200 free? Or does he try to stretch up into the 400 free, which 12 months ago looked like a wide-open path to the Olympic Team, before the emergence of Kieran Smith? His choices will say a lot about his confidence. Ultimately, this is a make-or-break year for Haas to show his long course promise, at a big meet, that he showed in yards in college. There’s some youthful energy and momentum in the Texas freestyle group, so maybe that will bring the spark.

#39: Bruno Fratus, Brazil – Fratus is a ‘gamer,’ a ‘racer,’ in the true Brazilian sprint mold. He’s not always consistent (he was faster in 2019 twice than his World Championship silver), but when he steps up on the blocks in the big finals, he finds a way to get his hand to the wall. Still, at some point, age and injury are going to catch up to Fratus, just like it did with Cesar Cielo before him around this age.

#38: Kristian Gkolomeev, Greece – The co-Worlds silver medalist in the 50 free with Bruno Fratus, Gkolomeev pretty much has one shot at a medal. He’s younger than Fratus, has less injury history, and had a better ISL season, so we’ve given Gkolomeev the edge. Like Fratus, though, he’s now got Caeleb Dressel and Florent Manaudou to contend with. That’s two former Olympic champions in their prime age-wise. Somebody has to be the odd man out.

#37: Jack McLoughlin, Australia – McLoughlin may be the most likely candidate to medal in all three men’s distance events (400 free, 800 free, 1500 free), besides his countrymate Mack Horton, that is. He would benefit, though, from taking a page out of Horton’s book and dropping the 1500, where he was just 16th place at Worlds in 2019. The 400 free at Australian Trials will be one of the highlights of the meet.

#36: David Aubry, France – Ironically enough, Aubry, who is qualified for the Olympic Games in the open water 10km race already, placed better in the 800 free (3rd) than the 1500 free (4th) at last summer’s World Championships. Both races are stacked this coming summer, and open water comes 4 days after the conclusion of pool swimming. Where will his focus lie for Tokyo? In my mind, he’s got a better shot at medals in the pool than in the ocean right now.

#35: Henrik Christiansen, Norway – Christiansen’s last official recorded long course meet that we can find came at the 2019 World Championships. He’s only swum one official short course meet, in November of 2020, since the end of 2019. Christiansen had great trajectory in 2019, when he took 2nd in the 800 free at the World Championships. Thus far, the only evidence of whether that’s continuing is the best time of 7:25 in the 800 free (short course) that he swam in the ISL exhibition. If he’s race ready, he feels like a contender for 800 gold.

#34: Clyde Lewis, Australia – Lewis had Phelps-ish talent and versatility as a junior, but some lingering leg problems pushed him away from the IMs (specifically the breaststroke) and into a freestyle specialist. He had the fastest legal time in the 200 free at the World Championships of 1:44.90, from the semi-finals, before finishing just 6th in the final (and he touched 7th, before Danas Rapsys was disqualified). It seems like the standard to medal in the 200 free should drop dramatically in Tokyo from the 1:45.63 it took to stand on the podium in Gwangju, especially if Sun Yang winds up being eligible (still to be determined). Lewis has all of the talent to grab gold, though.

#33: Shoma Sato, Japan – Another of the young breaststroke group that will be chasing the World Record in the 200 in Tokyo, if he can make the team, the 19-year old Sato swam 2:07.02 in October, and then a 2:06.78 in late January. His stock is rising hard. He’s not been on the biggest stages yet though, so for now we give the slight edge to his countrymate…

#32: Ippei Watanabe, Japan – The heir to the Japanese breaststroke throne, Watanabe was the only Japanese male breaststroker to make the final in the 200 breaststroke at Worlds. It seems likely that, especially with the home-pool pressure and home-pool bump, Japan will put two into this final, and maybe even both sub-2:07.

#31: James Wilby, United Kingdom – Great Britain has pre-selected both of their allowed Olympic spots in the men’s 100 breaststroke. The best known of that pair is Adam Peaty, but the other is James Wilby, who was the silver medalist at last year’s World Championships. With the rise of swimmers like Ilya Shymanovich, Arno Kamminga, Nicolo Martinenghi, and many others, that position is far from secure. Wilby didn’t have a great ISL season. Like Peaty, he’s substantially better in long course than short course, but unlike Peaty, Wilby wasn’t close to his best times during the short course ISL season. But that was a tough time for many British swimmers, especially, because of the nature of the lockdowns in the country that were worse than most in getting pool access for elite swimmers, so we won’t read too much into that.

Based on his ISL days, I’d assume Haas would go for the 400.

I’d say still the 200. I think the 400 at ISL is just the result of him being in great aerobic shape, something he seems to have let go the last few years.
History tells us at the Olympics the swimmers who medal are more ‘aerobic’ based, barring PVHB in 00/04, most other medalist in the century have a history of doing work.

I think that was based on team need more than his preference. He has had some great 100 free swims at NCAA’s over the years and I think his best shot at a medal other than the 4×200 is the 4×100 free relay

As for the 400, he’s had some good swims from time to time but it seems like he has a hard time putting two of them together at one meet. I think K Smith emerging really threatens his ability to make the team in that event

Good perspective. Based on the NCAA meet where he sprinted a 500 for an NCAA record, and then he looked exhausted the rest of the meet, I don’t like the look of two 400s the day before the 200, his main event.

Yeah, but the ISL 400 was the result of his phenomenal walls and underwaters.

Wilby at 31 seems interesting. Personally belive that sato and watanbe should be higher than him just because they have been more active recently, and both have medal potential, as well as world record potential. I understand wilby hasn’t gotten too much competition outside of isl, and has medal potential, but he will be just as threatened by arno and the rest of the field in the 100.

Wilby has a very real chance of going home with 3 medals – 1 in each of the breaststroke events and then another from the prelims of the 4×100 medley relay.

I understand the relay, but I don’t know about the 200. Anything can happen, but I think its a pretty big stretch to say he will medal in that. 100, yes. Its possible. And again, rankings were also based on wr potential.

What? He needs a miracle to medal in the 200 breast. I think you could still justify ranking him ahead of Sato/Watanabe, because the 200 breast seems more competitive, so he might have a better medal chance (not sure how much that matters for this ranking).

There is basically zero chance of this.