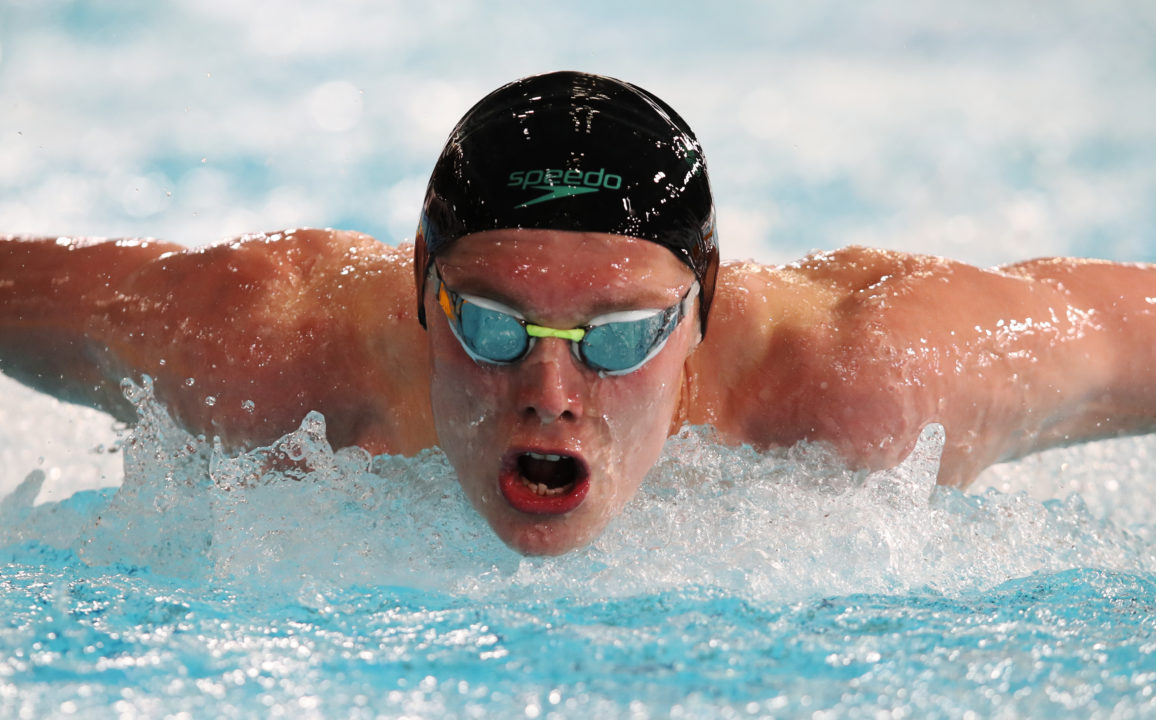 As we crack the top 20, we're starting to profile some of swimming's best and most versatile talents - like freestyler, IMer, and relay hero Duncan Scott. Archive photo via Ian MacNicol for Scottish Swimming

We’re into the blue-chippers now. Most of this block have legitimate chances to either win multiple medals or a single gold – though few of them are the gold-medal favorites. There’s a theme for quite a few of these guys: really, really high-level butterflyers or sprint freestylers. It doesn’t take too much connecting of the dots to figure out why their gold medal hopes are a little suppressed, keeping them just outside of our top 10 despite some clear, relay-carrying ability.

We’ve also got a couple of high-level distance guys who are just one tier below the distance duo that will show up in our top 10.

At the lower end of this 11-20 group are two 2016 Olympic gold medalists who have slid from the very top of their events over the past quad. But both have very real chances to surge into the top 10 with a return to form – or if one current gold medal contender ends up out of commission by Tokyo.

#20: Kosuke Hagino, Japan – Hagino won the 400 IM and took silver in the 200 IM at the last Olympics. But he hasn’t won anything at the world level since 2017. The 2020 ISL season looked like a major return-to-form step for Hagino, but we still have to see it in long course to pencil him back in among the gold medal hopefuls in the IMs this summer.

#19: Mack Horton, Australia – the Rio Olympic champ in the 400 free, Horton won silver in that event at 2019 Worlds. His former 400/800/1500 range has diminished some, and that lowers his total medal ceiling. He might have been considered the favorite for 800 free gold a couple years ago, but after missing the Worlds team in the event in 2019, he seems to have turned his focus downward in distance. Horton almost seems more geared to the 200/400 these days, but the 200 is a crowded landscape for medal contention. Still, Horton’s speed is improving, and he did split 1:44.8 on a relay in 2019. Ultimately, his stock depends a lot on the eligibility status of a certain Chinese distance swimmer who has gotten the better of Horton on several key occasions.

#18: Florian Wellbrock, Germany – Wellbrock is a dual-threat between pool and open water swimming as one of the world’s foremost long-distance racers. In 2019, he won World Champs gold in the 1500 free and in the open water 10K. To make the international level in both of those events simultaneously is rare; to win both is extremely impressive. Wellbrock has a legitimate shot at two Olympic gold medals, but even his relatively high odds of taking home two medals of any color should put him inside our top 20.

#17: Arno Kamminga, Netherlands – the 25-year-old Kamminga has never won a World Championships or Olympic medal. But that seems destined to change after a 2020 in which Kamminga hit long course times of 58.4 and 2:06.8 in the 100 and 200 breaststrokes, respectively. He ranks #3 all-time in the 100 breast and #5 all-time in the 200 breast. And although a certain member of our top 10 makes a 100 breast gold mostly a longshot, Kamminga has a very good opportunity to win two individual medals at the Tokyo Olympics.

#16: Danas Rapsys, Lithuania – Rapsys would have been the 2019 World champ in the 200 free, had he not taken a controversial false-start DQ. He figures to be a top gold medal contender at the 2021 Olympics, which would give Lithuania just its second Olympic swimming medal ever. He had a great ISL season, with the league’s fastest short course 400 free and its third-fastest short course 200 free, so the arrow is very much pointing in the right direction for Rapsys, who could also be an outside medal contender in the 200 back.

#15: Mitch Larkin, Australia – Larkin has been a fixture in the crowded men’s backstrokes since his two world titles in 2015. But while his backstrokes are probably just minor medal hopes for the time being (we’ve got a disproportionate number of backstrokers coming in our top 10), he supplements with a fast-rising 200 IM that just might make him a gold medal contender in a post-Phelps world. Larkin had the world’s top 200 IM time for all of 2019, though he missed the medals at Worlds. In 2020, he was #3 in the world in the event.

#14: Andrei Minakov, Russia – the star Russian flyer Minakov would probably push the top 10 in this list if his primary events weren’t so dominated by another really high-ranking swimmer. At age 17, Minakov was the Worlds silver medalist in the 100 fly, and he’s only continuing to get better in both sprint fly and sprint free. His 47.57 in the 100 free put him #1 in the world for 2020, and he’s likely to have a big NCAA impact along with his world-level prowess.

#13: Kyle Chalmers, Australia – this feels low for the reigning Olympic champ and Worlds silver medalist in the 100 free. But the sprint freestyles are also crowded – Chalmers has a gold medal/world record ceiling, but he could be a tick off in one swim and miss medaling entirely. Missing much of late 2020 with shoulder surgery casts a lot of uncertainty as to where Chalmers will be in his floor-to-ceiling spectrum. He was the world’s #2 swimmer in the 100 free for 2020, and is a true relay monster who buoys Australia’s teams. His 200 free has come along nicely, though he was just 8th in the world there in 2020 and needs a really good swim to contend for a second individual medal along with his 100 free.

#12: Duncan Scott, Great Britain – the real deciding factor between Scott and Chalmers is range. Scott was the 2019 World Champs bronze medalist in the 200 free in addition to his wicked 46.1 split in a 100 free on the end of a gold-winning medley relay. And Scott is also a sneaky-good 200 IMer who missed medaling there by two tenths in 2019. Scott was #22 in overall ISL scoring, and his international profile is soaring after one of the greatest relay anchor swims in history with that 2019 Worlds medley relay.

#11: Chad le Clos, South Africa – le Clos doesn’t have the single-event ceiling of Chalmers or Scott. But he still has tremendous range in the butterfly and freestyle events. He won two silvers (200 free and 100 fly) at the 2016 Olympics and has pretty consistently been a multi-medal winner at every world-level event since: 200 fly gold at 2017 Worlds, one gold among four medals at 2018 Short Course Worlds, and two bronzes at 2019 Worlds. 9th league-wide in ISL scoring, le Clos is also a fixture in the World Cup most years, and remains extremely relevant on the world level heading towards his 29th birthday.

I feel like le Clos is a bit too high. Wouldn’t put him in front of Chalmers or Minakov. I think both Chalmers and Minakov have a much shot at Olympic gold than le Clos, while I think the best that le Clos can do realistically is a minor medal in either of the fly’s.

Yes, he’s the least likely to win an Olympic gold among these 10 swimmers.

Le Clos and Hagino of these 10 could win 0 medals and would not surprise me.. some guys on top 40 are safer bets

Agreed, Le clos chances are small.. he delivers but he needs some people to not deliver.
On 100 I would put him behing Dressel, Milak, Mehtella, Minakov (I Know rooney was 2nd in the World But I still want to see if he will keep it) and also some newcomers will battle with him like Ponti

on 200 Milak as heavy favorite, Seto and then we have Urlando, Kenderesi, Burdisso for bronze with Le Clos

Metella? Why? I don’t like Le Clos, but history has taught us that he usually finds a way to medal when it matters.

Chalmers will win one medal at best while Le Clos could win two medals. Minakov should definitely be ranked ahead of Chalmers. He is as much a favourite for silver in the 100 fly as Chalmers is for silver in the 100 free + Minakov could actually medal in a second event (100 free). Chalmers is massively overranked, the same was true for Manudou. He is the only one on this list who will win one individual medal at best + he isn’t even favourite for gold in any event.

ur forgetting about relays. chalmers will win more than 1 medal

I was talking about individual medal obviously. Not sure Australia will win a relay medal, maybe if he swims the 800 free relay. Makes no sense to include relay medals.

I still think Chalmers has a legit shot at winning gold in the 100 free, he was a tenth behind Dressel closing like a freight train. I get he had surgery but he’s still a 47.0/1:45 freestyler on his day. Plus the olympic champ at 18, he understands the pressure.

So still no Ryan Lochte. Please don’t even think about including him in the top 10.

I think we are safe…