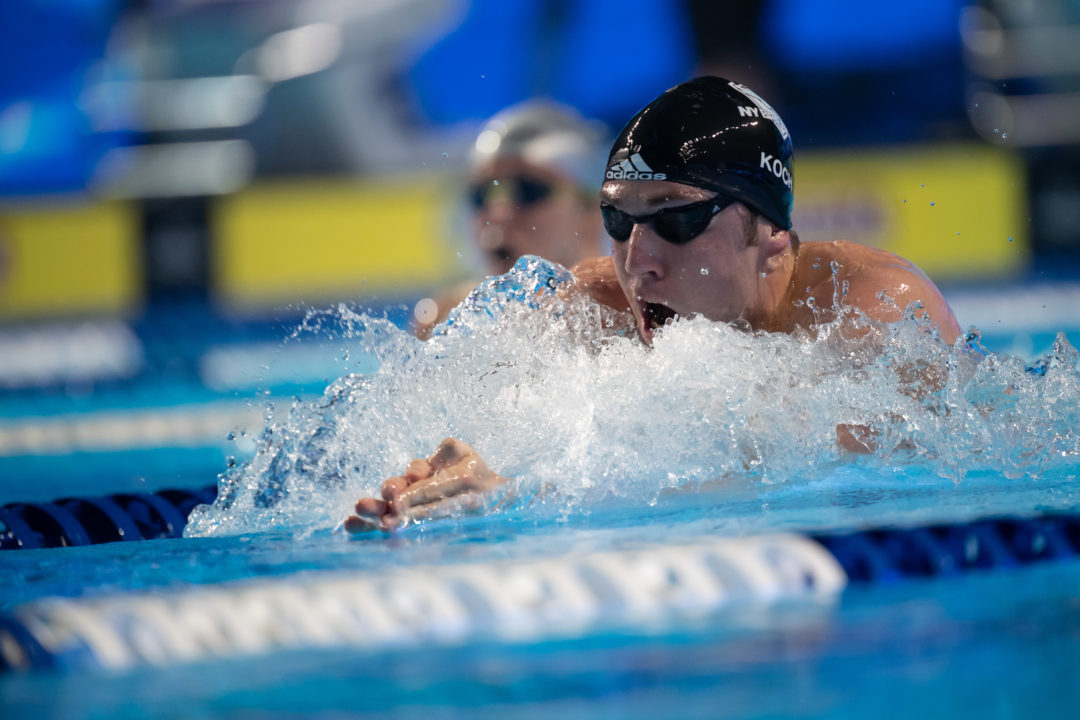 We continue our countdown of the top 100 men and the top 100 women in world-level swimming heading into the 2021 Olympic year. Current photo via Mike Lewis/Ola Vista Photography

In some ways, this list looks very similar to #100-76, and sure, there are probably arguments to be made for a few of those swimmers displacing some on this list; as we’ve tried to emphasize, this isn’t an exact science. We’re not into our top gold medal contenders yet. But this crew just inside the top 100 are potential minor-medal-contenders, plus some names who could make big waves at Short Course Worlds or in the International Swimming League.

The other group we see a lot on this list are freestyle specialists who may not get a shot at an individual Olympic swim, but should be in contention for medals on both freestyle relays.

#75: Noe Ponti, Switzerland – The Swiss Butterly specialist hit lifetime bests in the 100m and 200m fly events this year, including a 51.15 in the 100 that should make him a strong contender for the Olympic final.

#74: Ilia Borodin, Russia – The 17 year-old IMer may still a little away from being a definite medal contender, but he closed 2020 strong, setting Russian national records in the 200 IM (1:58.0) and the 400 IM (4:11.50). The latter mark is officially a World Junior Record, and only Michael Phelps and Kosuke Hagino have been faster at 18 or young.

#73: Nandor Nemeth Hungary – Three years ago, Nemeth made his mark at the 2017 World Junior Swimming Championships by anchoring Hungary to gold medals in the 4×100 and 4×200. With lifetime bests of 48.1/1:46.7, he’s the first guy on this list to be one of the aforementioned double relay medal threats.

#72: Federico Burdisso, Italy – Only 18 years old, Burdisso is the Italian national record holder in the long course 200 fly, and having gone 1:54 now on three separate occasions, he should be a minor medal threat at the Olympics.

#71: Joao Gomes, Brazil – Now 35, Gomes’ only individual hardware at the last two World Championships has come in the 50 breast, but he’s no slouch at the 100, having won bronze at Pan Pacs and gold at Pan Ams with 59-mid both times.

#69: Kiril Prigoda, Russia – Known a little more for the shorter breaststroke events in long course (he won bronze in the 100m at 2017 Worlds), Prigoda busted out a 2:07.85 to upset defending world champion Anton Chupkov at the Russian Swimming Cup this past October.

#68: Nathan Adrian, United States – Not going to lie, it kind of hurts to see the London 100 free gold medalist this low. But the USA has seen a massive explosion in his signature event over the couple of years and objectively, there’s a chance that Adrian could not even make the team, but the Americans sure hope he does, as he’s been a rock solid contributor for the last decade.

#67: Bobby Finke United States – Finke’s potential has been clear for years, but he rose to new heights when he swam the fastest 1650 ever at the SEC Championships last February. He’s no slouch in long course, where he’s been 14:48 in the 1500m.

#65: Tom Dean, Great Britain – Despite all the weirdness of the year, Dean had a great 2020 in the pool, hitting 1:46.03 at the Edinburgh International meet to become the 4th-fastest British 200 free swimmer ever. He also won the 400m free at the ISL final, being out a field that included Townley Haas, Fernando Scheffer, and James Guy.

#64: Zach Apple, United States – Apple has been a relay stalwart for the US over the last few years, including a 46.86 split on the gold medal 4×100 free relay in Gwangju.

#62: Ryan Held, United States – Held has up-and-down time of it over the last few years. He had a memorable moment on the podium after being part of the USA’s gold medal 4×100 free relay team, then struggled for a few years, then set the U.S. Open record in the 100 free with his 47..4 in the summer of 2019.

#61: Emre Sacki, Turkey – Our 2020 Swammy Award winner for breakout swimmer of the year, Sakci had a lights out ISL season that saw him swim the 2nd-fastest short course 50m breaststroke ever, behind only Cameron Van Der Burgh’s super suited time from 2009.

#60: Kieran Smith, United States – Smith had one of the biggest domestic swims of 2020 with his 4:06 500 free. Smith already had a solid long course pedigree, and if he can translate that SCY prowess into long course, he could make us look silly for ranking him so low.

#58: Katsuhiro Matsumoto, Japan – The 23 year-old shaved a tenth off of his own Japanese national record earlier this month, putting up a 1:45.1, and given how wide open the 200 free looks right now, he’s definitely in the medal hunt, and could even pop off for gold. He’s also got a sub-48 relay split to his name.

#57: Martin Malyutin, Russia – One a small handful of swimmers who has a lifetime best of 1:45-something in the 200 free, he will once again be shooting for for multiple medal after winning bronze at 2019 Worlds and swimming on Russia’s 4×200 relay.

#56: Max Litchfield, Great Britain – Litchfield had a few near-misses on major IM medals, including a 4th place finish in the 400 IM in Rio, then a pair of 4th place finishes in both IM at 2017 Worlds. He’s the 400 IM British national record holder with a lifetime best of 4:09.62.

#55: Lewis Clareburt, New Zealand – The national 400 IM record holder, Clareburt’s best time of 4:12.07 isn’t eye-popping, but he is on the right trajectory and does have a steady track record of getting it done when it counts; he earned bronze medals in the event at both the 2018 Commonwealth Games and the 2019 World Championships.

#54: Jay Litherland, United States – He’s already an Olympic veteran, and he was one of a handful of US swimmers to hit personal bests at 2019 Worlds. His 4:09.22 best in the 400 IM puts him well ahead of any US swimmer not named Chase Kalisz.

#53: Ben Proud, Great Britain – He’s been relatively quiet in long course over the last few years, but he set a then-textile record of 21.11 in the 50 free less than three years ago. He also had more trouble than most of the world’s elite swimmers finding training space during the pandemic, which is probably at least partially responsible for his relatively lackluster ISL season. Still only 26, Proud should still very much be in the medal hunt in the shortest and fastest Olympic race.

#52: Jeremy Desplanches, Switzerland – The 200 IM looks to be one of the more open events at the world level, and Desplanches, who earned silver in Gwangju with a Swiss national record of 1:56.56, is definitely a medal threat.

Nice to see a kiwi on the list – Lewis seems a heck of a nice guy too!

Adrian has been my favorite male swimmer since about ’09, so if you think I can just let this go without pitching a fit you’re crazy. I understand your logic and process for ranking but I AM SAD and YOU ARE WRONG 😭.

If I use enough all caps he’ll get on the team and medal, pretty sure that’s how it works right?

It will be interesting to see who will be on the next list (50-26). My personal top 25 in no particular order are (now that Hayang, Grgić and Andrew aren’t “available” anymore):

I would only rank guys in the top 25 who are either medal contenders in multiple events or have a realistic shot at gold.

13-17 (Outside shot at a medal):
Smith
Sacki
Litchfield
Heintz
Graham

In which event is Held, Apple, Malyutin & Dean a realistic medal chance in?

Relays for all of them and maybe 100 FR for Apple or Held and Malyutin in the 200 FR.

Alexander Graham has to be a big medal chance in the 4×200 for Australia.

I wonder who’ll get the individual spots. It’s gonna be close between 4-5 different guys.

A little perplexed that someone like Joao Gomes is on the list….Gomes best event by far is not even on the Olympics and lets face it he might barely squeak into the final and that is far from certain given his age.

You could say the same for multiple guys on that list. Adrian, Ponti, Koch, Nemeth, Finke, Smith, Dean or Prigoda aren’t necessarily locks to make the final. On the other hand multiple guys with a much better chance at making at least one final are ranked between 100 and 76, for example Hayang, Stubblety-Cook, Grgic, Ceccon, Martinenghi or Andrew.

Oh i agree with you, the rankings seem strangely ordered but I am not complaining. More the swimming content, the better. I definitely rate Martinenghi higher than Gomes since they race the same events and Nicolo had a breakout year after a few injury ridden years. He is a real shot at a minor medal if he continues on his current trajectory. Stubbelty-Cook also had a couple of monster swims recently. I do think that Finke, Dean and the likes that you mentioned are overrated when it comes to their ranking on this list. Just my opinion.

I think Adrian, Finke, Miressi, Smith and Koch are ranked too high. They shouldn’t be ranked ahead of serious medal contenders like Burdisso, Matsumoto or Desplanches.

Didn’t realise Ben Proud was struggling to find somewhere to swim. Where has he ended up?