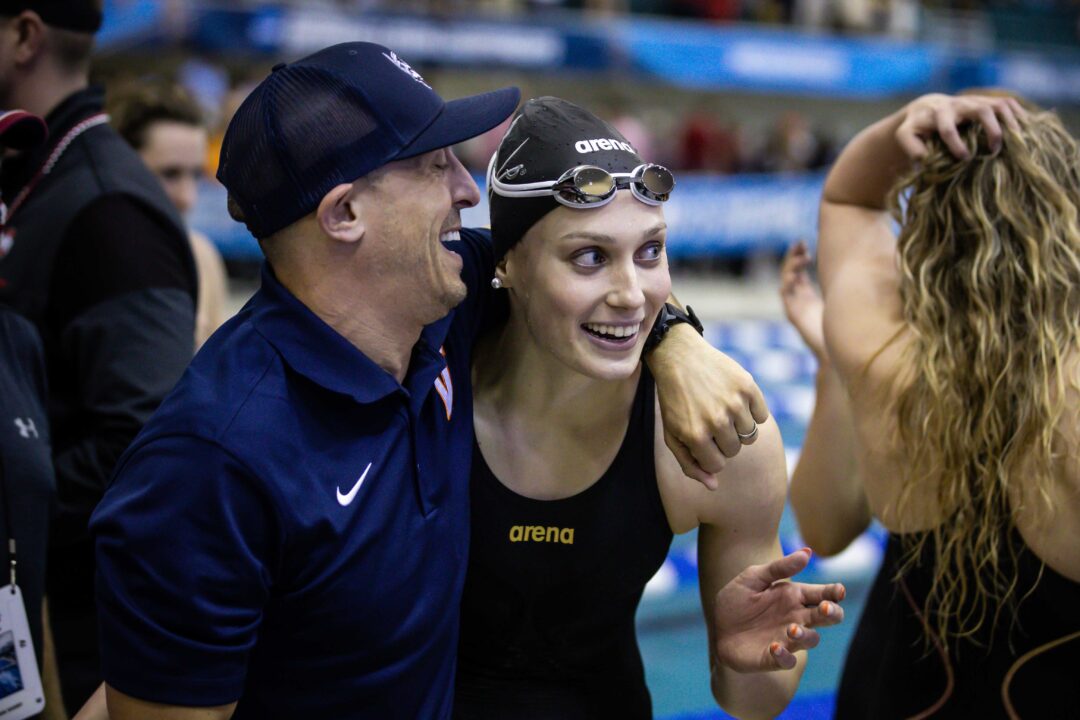 Alex Walsh of Virginia was voted to win the 200 and 400 IMs by all 10 of the SwimSwam writers contributing to this report. Archive photo via Jack Spitser/Spitser Photography

After a few-year hiatus from doing pre-season picks, we’ve decided to have them make a return. Many of our authors debated who they think would win each event and have listed them below.

The men with unanimous votes were Destin Lasco (Cal) in the 200 back, Max McHugh in the 100 breast, and Leon Marchand in the 200 and 400 IMs. Unlike the women’s side where all the relays were unanimous, the only relay on the men’s side voted to win by everyone was Texas in the 800 free relay.

Anya: I picked this upset myself in the 200 fly. Dakota Luther swam for Georgia the last 4 years and has now switched her training up. She had a great summer capturing a National Title and going a LCM best time in the 200 fly. She was only a second behind A. Walsh last year but I think the new change of scenery (especially with the dominant fly group at Texas) might put Luther over the hump.

Braden: We’ve seen an NCAA title from a freshman in each of the last 3 NCAA Championship meets. This class has an all-time talent Claire Curzan in it, and nobody has picked her to win an event. She’s my upset special – but it won’t be in the 100 fly. My upset special is Claire Curzan, and I think she’ll win the 200 fly.

Robert: Is it an upset to pick the reigning Olympic gold medalist to win the comparable yards event? It feels like someone should mention the chance that Lydia Jacoby could adapt quickly to college and win the 100 breast.

YanYan: I’ve mentioned this in previous articles before, but I can see Ohio State pulling off an upset against Virginia in the 200 medley (UVA only beat them by one second last year WITH Wenger). Hannah Bach is arguably the best 50 breaststroker in the country, Amy Fulmer can split 20-point, Katherine Zenick was faster than Lexi Cuomo last year, and Nyah Funderburke (a great sprinter who dropped over a second in her 100 back last year) is a good replacement for Emily Crane. With Virginia losing wenger, Ohio State could beat them here— only if they fire on all cylinders at NCAAs.

Sophie: Emma Sticklen posted a lifetime best to lead the 200 fly prelims last year before adding time in finals and finishing seventh. She won’t make that mistake again, and will power past Walsh and her Texas teammates for the win.

Riley: It’s a long shot, but Lillie Nordmann just might settle into enough of a groove as a sophomore to steal the 200 free title from Stanford teammate Taylor Ruck.

Spencer: My potential upset is Texas’ Kelly Pash in the 200 free. It’s a tall order, but she finished third last year and has improved in the event year-over-year while at Texas.

Annika: Dakota Luther, Texas in 200 fly. I can see her potentially giving Walsh a good battle since the event is on the last day and Walsh’s schedule is so heavy.

Reid: Mona McSharry of Tennessee could win the 100 breaststroke. I was actually close to choosing her over Dobler… this will be a great race.

Anya: Although I didn’t pick this upset, I could see Matt Fallon winning the 200 breast. He had a strong prelims swim last year and had a great LCM summer. What might be tough to beat is the momentum Marchand has.

Braden: Aiden Hayes is my upset special. He’s a great short course swimmer and dropped almost a second in long course in the 100 fly over the summer.

James: Not a massive leap here but could see Adam Chaney winning the 100 back. Coming off a PB in long course and although I picked Urlando, not fully confident he races it at NCAAs.

YanYan: Jack Aikins posted a time in the 200 back at last years NCAA b-finals that would have been fourth in A-finals. In addition, he also dropped over a second in long course and showed some early-season speed at the UVA intrasquad, so this could be a sign that he’s due for a major 200 back breakout and be a contender to pull an upset. Considering that five out of the eight 200 back A-finalists have graduated and Carson Foster might switch to another event (200 fly maybe?), Aikins could pull off a suprise win if Destin Lasco isn’t on 1:35-point form (which he wasn’t last year).

Sophie: Since I already took Chaney in the 100 BK, I’ll stay with backstroke and pick Hubert Kos to upset Lasco in the 200. With Kos not arriving at ASU until Jan, there’s a tremendous amount of unknowns, but if he can make a quick adjustment to yards and Bowman’s training, he could surprise in March.

Spencer: I’m picking Cal’s Gabriel Jett as a potential upset in the men’s 200 fly. He wasn’t a contender last year as a freshman, but he exploded this summer with a 1:54.3 in the LCM 200 fly, which certainly puts him among the best in the nation right now.

Riley: Picking the fastest freshman in NCAA history in the 50 free doesn’t feel like a huge upset. But Tennessee’s Jordan Crooks will still have to take a big leap as a sophomore and learn from last season’s NCAA final in order to outduel a trio of Olympians favored by the rest of the staff.

Reid: Ross Dant of NC State has been on the cusp of a major win for a few years now. He’s done well at both NCAAs and LCM qualifying meets, though he’s missed getting on top of the podium/making a senior international team. 2023 could be his year to win the mile at NCAAs.

Yan Yan – very interesting pick on the medley relay, and it’s a good point, but Alex Walsh split 26.5 BR as a junior in high school. I bet she can be at least 25.9. With the additions of Novelline/Parker, they don’t necessarily need her in the 2FR relay. Not to mention, Doug has been 21.9 in fly (at midseason). If they go Walsh-Walsh-Douglass-Novelline/Parker OR Walsh-Walsh-Cuomo-Douglass, they’ll be fine either way.

Ngl I did have a second of, “dang, no one picked Regan Smith to win anything.”

But then I realized it would be an exceedingly bad pick. (Not as bad as Matt Sates in the first round of a fantasy draft ofc, but still not a great pick.)

Surprised not one author picked Douglas to win the 100 fly. MacNeil is great, but thought one person would pick the reigning ncaa champ.

prolly bcuz mcneil was injured the last time. macneil will be fresh and free from any relay duty this time

i’m tired of seeing this overplayed narrative. she wasn’t injured during the meet. it happened in the locker room after the meet ended. zero impact on her swimming. she’ll never publicly admit it, but it’s the truth.

Loved this article. And almost all the post-pick comments were highly rational. More. More.

Hard to argue with your men’s sprint freestyle picks, but Brooks Curry seems to always find a way to get his hand on the wall first at big meets.

Max McHugh is winning two titles in the home meet.

Good point. Sleeping in your own bed and such could be r a big difference