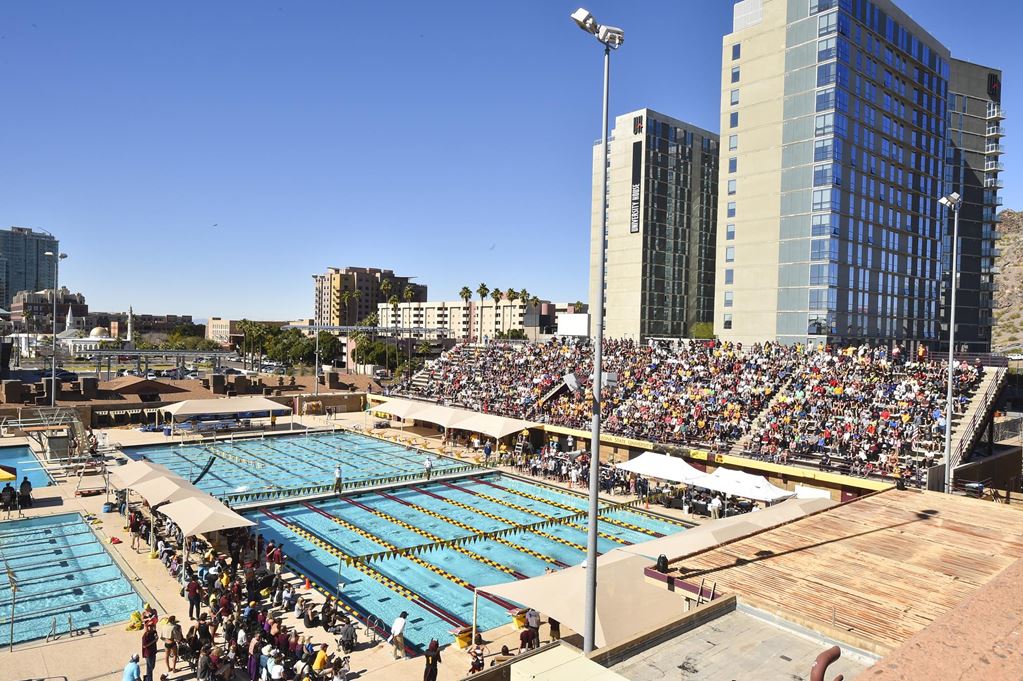 “We experienced being at truly rock bottom, and that moment really turned the page for the program," said ASU associate head coach Herbie Behm.

TEMPE – The Arizona State men’s swimming program has been on the rise in recent years, highlighted by a sixth-place finish at the 2022 NCAA men’s swim championships.

More recently, Sun Devils sophomore sensation Leon Marchand was named “Swimmer of the Meet” at the FINA World Championships in Budapest, where he shattered two French national records, indicating that the rise continues.

However, Marchand’s feats in the pool, and those of his ASU teammates, might not have occurred if a determined group of alumni hadn’t stepped up.

In 2008, ASU announced that the school’s athletic department planned to pull the plug on the swim program, along with wrestling and tennis, due to budget constraints.

The news was a shock to many in the swimming community, including then-ASU assistant coach Simon Percy. The morning of the news, Percy recalls ASU head coach at the time, Mike Chasson, coming into his office, slumping on the couch and telling him what had happened. Chasson looked as if the wind had been knocked out of him.

“We were totally blindsided by the move at the time,” Percy said. “We had no idea this was coming.”

Once he got past that initial shock, Percy dove into an effort to save the program.

Percy reached out to former ASU swimmer Mikael Orn and told him the news. Orn hopped on a call with his former teammate Rob Richardson. A grassroots effort began to take shape.

Within a few days, Percy, Orn and Richardson had gathered thousands of dollars in pledges. They continued to meet twice a week to gather more pledges and brainstorm.

“I actually hung up a sign that said, ‘Save ASU swimming’ at the Olympic Trials and even made buttons and hats,” Richardson said. “The mantra at the time was to do whatever we could to get the message out.”

The magnitude of the effort even moved ASU’s rival in Tucson to rise above school loyalty in the interest of the sport. Arizona swimming coach Frank Busch encouraged those who attended a gala event to support the Wildcats that he wanted the ASU program to survive, encouraged attendees to donate if they could.

After two months of hard work, Percy and the group of alumni had commitments for close to $1.4 million and $400,000 in hand. The group handed over a $330,000 check to the athletic department and the program was reinstated.

Still, the race wasn’t over. With a $5 million endowment needed for the long-term survival of the program, the work continued.

Then in 2010, swimmer Herbie Behm, who is now ASU’s associate head coach, transferred from the University of Tennessee to ASU to seek a fresh start. An Arizona native who attended Catalina Foothills High in Tucson, Behm said the choice to return to his home state was easy.

And the support that the program received when its future was in doubt played a role in his decision.

“For me personally, it felt like a cool opportunity to come to a team that was rebuilding, like myself,” Behm said. “Seeing how the alumni supported the program during a high-stake time, it was exactly a place I wanted to be at – a place where a program was supported well by its own community.”

During Behm’s time in the pool for ASU, the program was still trying to raise money to keep going.

“We sold raffle tickets during Christmas break and did other things as well,” Behm said. “We did what we could to continue swimming because that’s what we loved.”

In 2014, a permanent endowment was established to support the swimming program. Once seemingly dead in the water, the ASU program has triumphed. Now 14 years removed from those dark times, the program continues to build on those efforts that began back in 2008, and today’s Sun Devils have proved worthy of the swimmers who laid a new foundation.

“It’s been very satisfying to see our program grow each year,” said ASU swimming coach Bob Bowman. “Each team has been an extension of the one before and a clear progression as well. So many swimmers have contributed to our elevation.”

While the ASU program survived and then flourished, men’s swimming programs such as those at Connecticut, Michigan State, Eastern Michigan, Wright State and others have not been as fortunate.

The group behind ASU’s efforts back in 2008 continues to try to help other programs.

“We’ve invited plenty of leads on projects like what we did, and we tell them our story,” Orn said. “Just like when we were cut, we reached out to programs that were cut themselves and how they got back on their feet. It’s truly inspirational to hear those types of stories.”

Behm hopes the story of Arizona State’s rise from near extinction will inspire future generations of swimmers and motivate those in the program now.

“I don’t want people to forget that we clawed our way to get here in an incredibly fast time,” Behm said. “We experienced being at truly rock bottom, and that moment really turned the page for the program.”

I read the headline and I thought someone drowned

You’d think with all the money in the Seattle area the University of Washington could get swimming and diving going.

Do they suddenly have a lot more money than they did in 2009?

Dear University of Iowa, AD Gary Barta, and The Iowa Board of Regents,

Read this.
Take some notes 📝
Do better (or retire / resign).

So happy for Herbie. He was a legend for going 19 in HS glad at how his coaching career went

Yes a definite success story for the ASU men’s team. Its too bad the Program doesn’t have the same focus and commitment to recruiting and coaching of the Women’s team.

Thanks for your insight Ex-coachy. Maybe you’d like to share your Ex-pert opinion on the obvious disparity between the Mens & Womens rankings this year, last year, year before, year before that? How about all the hoopla over the Women’s recent recruiting classes? Or maybe share your photos of Bob coaching his butt off at Women’s NCAA’s from the pool deck in Tempe?

I remember when this happened Nick Brunelli was active on The Raceclub Forums and it got a lot of attention.

I have successfully manipulated the NCAA to give me unlimited years of eligibility so I can swim for the team until I’m 40.

They should legitimately name one of the pools, meeting rooms, something after Simon for all he’s done for that program, and masters swimming in the valley.