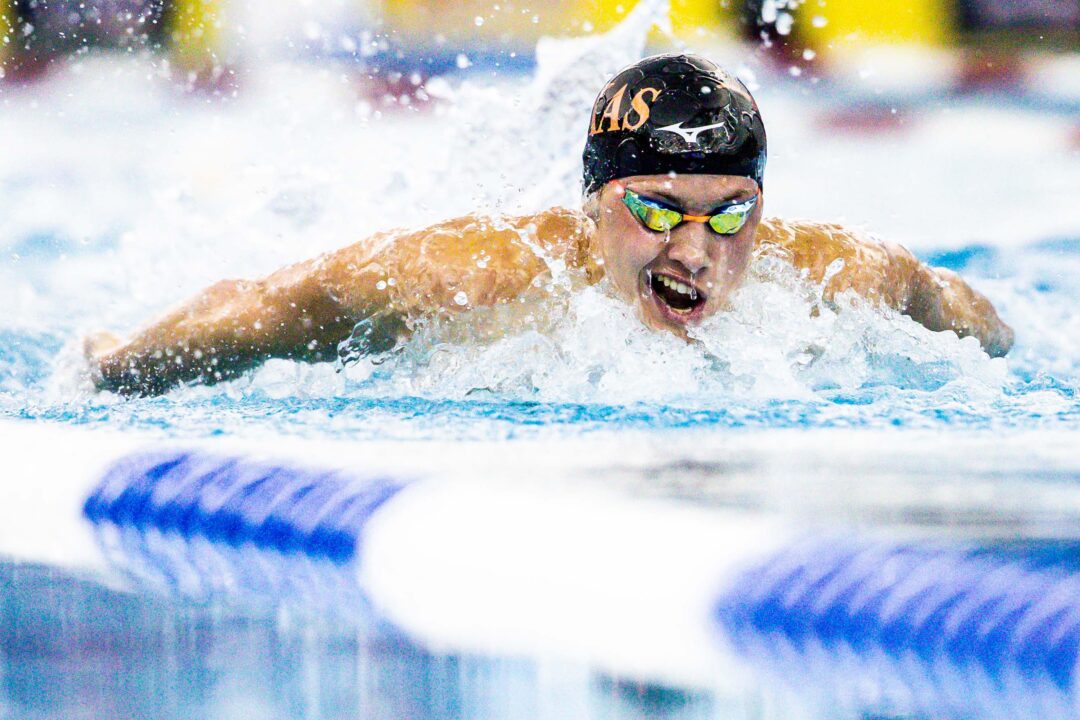 Scheduling conflicts and the presence of dominant champion Kristof Milak make the prospect of racing the 200 fly globally an interesting one for Foster. Archive photo via Jack Spitser/Spitser Photography

Italian Alberto Razzetti will be looking to build on a successful 2022 that saw him win the European title in the men’s 400 IM.

Rising Bosnian and Herzegovinian star Lana Pudar will be one to watch this year as she continues to move up the ranks in the women’s fly events.

Our most recent poll asked SwimSwam readers what strategy Carson Foster should take in the next two years after his breakout swim in the 200 fly earlier this month:

Question: Should Carson Foster target the 200 fly for Paris 2024?

Carson Foster is on a hot streak.

First, he put to rest any question that he couldn’t perform at his best when it mattered most, as the 20-year-old swam some historically fast time en route to winning silver in both individual medley events at the 2022 World Championships, and added a gold as a member of the U.S. men’s 800 free relay.

Less than two weeks later, Foster was back in action at the Southern Sectionals in Austin, where he delivered three monstrous best times in the 400 free, 200 back and 200 fly.

The most impactful swim among the three was the 200 fly, where Foster’s 1:53.67 made him the third-fastest American in history and the second-fastest in a textile suit, trailing only Michael Phelps.

The time was also faster than what Luca Urlando clocked to win the U.S. Trials in April (1:54.10), and was just six one-hundredths shy of what Japan’s Tomoru Honda went to claim bronze at the World Championships (1:53.61).

All of this leads to the question of whether or not this event should be a focus for Foster moving forward.

It seems like a no-brainer, but there are a few things to keep in mind.

Foster also races the 200 free—he was third at Trials this year and was a key member of the 800 free relay—and it’s an event he will realistically have a chance to represent the U.S. individually in moving forward.

The two events conflict on the current Olympic and Olympic Trials schedule, with the 200 free final and 200 fly semis falling during the same session.

Paris 2024 will feature a new nine-day swimming schedule, so it’s possible any conflicts are erased, but it’s unknown for now.

At the U.S. Olympic Trials, regarded as the most pressure-packed meet on earth, would Foster be comfortable taking on the 200 fly semis shortly after the 200 free final, also having had two 400 IMs under his belt and three 200 IMs still to come?

At the Olympics, not only do the 200 free final and 200 fly semis conflict, but the 800 free relay comes after the 200 fly final the following night.

We’ll have to wait and see what he chooses to do, and maybe Foster will even adopt the short course 200 fly as his third event at the NCAA Championships for the University of Texas this season after racing the 200 back last year.

In the poll asking if Foster should do with the 200 fly for the next two years, more than 90 percent believe he should at least explore the possibility of racing it in Paris.

Just under 50 percent believe he should experiment with the event at the 2023 International Team Trials/World Championships, while 40.7 percent think he should mark it as a focus event for Paris right away.

If the schedule for the 2023 World Championships in Fukuoka mirrors what we saw in Budapest, the 200 free and 200 fly will have the same conflict as they do at the Olympics. The 200 fly final then collides with the 200 IM semis, rather than the 800 free relay final.

While the scheduling issues are possibly one reason, another could be that he’s within striking distance of being the best 200 IMer on the planet, trailing Leon Marchand at Worlds by less than half a second, and he’s still just two seconds back in the 400 IM after a breakout 4:06.56 swim.

In the 200 fly, however, there’s more than three seconds to go to bridge the gap up to Kristof Milak, the world record holder and fastest man not named Phelps by more than two seconds.

If gold seems out of reach, is this an event Foster will still key in on, or does it make more sense to put all of his energy towards the medley events, plus the 800 free relay?

Below, vote in our new A3 Performance Poll, which asks: Which female showdown is most compelling at the upcoming Commonwealth Games?

I really doubt a champion like Foster would avoid the 200fly because Milak is dominating it and his best realistic shot for a medal is silver. Should he avoid the IMs also because Marchand is swimming them? I could see Foster avoiding the 200back out of respect for the other Team USA swimmers in that event.

You just wanted an excuse to put all the “M(a)c” swimmers into one poll, didn’t you?

I think Foster should target the IMs and the 200 fly individually and just go for a relay spot in the 200 free. Unless he’s got another big drop in the tank in the 200 free he won’t be a medal threat, whereas that 200 fly time puts him solidly in the hunt for a minor medal. The 200 back is another option, but a stacked domestic field makes that a huge risk, especially when an off swim in the 200IM could leave him outside the top 2. Op

I wish he could go after the 400 free because I think he still has more to show in that event, but it’s unworkable with the 400IM

I’m not gonna tell college students what to experiment with. Too much liability there.

2023 would be the year to experiment, see if you can handle the heavy lineup.

Phelps did it, why can’t Foster?

Phelps did it, why can’t I?