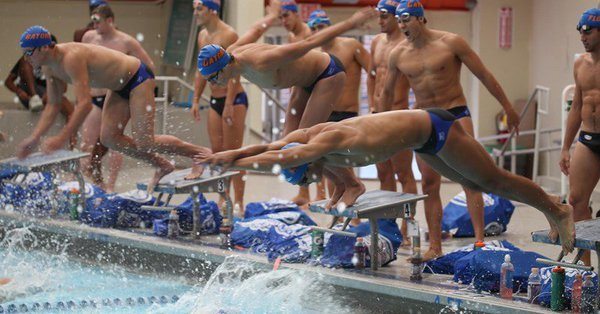 Nearly half of voters picked a retooled Florida team to top USC and Georgia at this winter's men's NCAA Championships. Stock photo via Florida Athletics

Our most recent poll asked SwimSwam readers which new-look team would finish highest at men’s NCAAs:

Question: Which heavily-rebuilt roster will finish highest at 2019 Men’s NCAAs?

USC gained just under a third of the total votes. The Trojans were 6th last year, 94 points behind Florida, but they return twice as many points (32) as the Gators. USC, though, lost the bulk of their relay prowess, including three of four legs on the winning 200 medley. Notable graduations are Santo Condorelli (27 points), Dylan Carter (18 points), Dash Enos (13 points) and Ralph Tribuntsov (11 points), and the Trojans also lost Jake Sannem to transfer and Robert Glinta (14 points) to the professional ranks. Their recruiting class is good, though, ranked #6 nationally and led by #3 overall recruit Alexei Sancov.

Georgia was just 10th last year, far behind Florida and USC. They return 31 points, though, and when you factor out graduating seniors, their 66 projected points easily top the other two. On the other hand, they graduate two Olympians: Gunnar Bentz (34 points) and Jay Litherland just outside our top 12 nationally(14 points). Their recruiting class was , but does have #19 overall recruit Andrew Abruzzo (a potential powerhouse in distance free, strokes and IM) and a few key transfers.

Below, vote in our new A3 Performance Poll, which asks voters if the high-profile Indiana victory over the Texas men changes their NCAA title predictions: