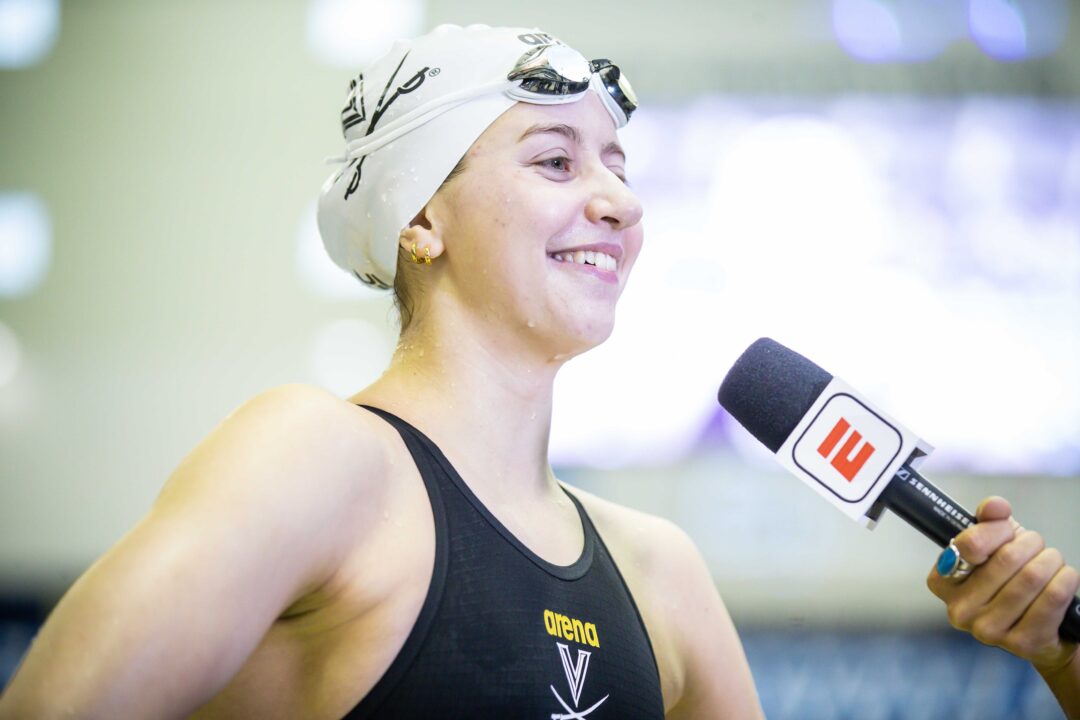 If you were the general manager of an expansion ISL team, who would be your first pick? Archive photo via Jack Spitser/Spitser Photography

Our most recent poll asked SwimSwam readers who they would select if they were building an ISL team from scratch:

Question: If you were the general manager of an expansion ISL team, who would be your first overall pick (among current NCAA swimmers)?

In looking at the results from the first week of midseason invites in the NCAA, the sheer talent and versatility atop the women’s rankings was staggering.

The current crop of female collegiate swimmers is arguably the best we’ve ever seen. Individual Olympic medalists Maggie MacNeil, Alex Walsh and Kate Douglass have been dominant forces in the NCAA for some time now, combining for 10 individual national titles over the last two seasons.

Last year we saw Torri Huske and Gretchen Walsh enter the fold, and this year, Claire Curzan is the top freshman in the country and has already made a significant impact.

The thing about this group of six swimmers is not only their high-end ability, but the fact they can do it across multiple distances and more importantly, strokes.

As 200 IM Olympic medalists, that’s a well-known fact for A. Walsh and Douglass, while Huske was the runner-up to Walsh in the 200 IM at the 2022 NCAAs and is currently the fastest swimmer in the country this season. MacNeil, Curzan and G. Walsh, meanwhile, have all proven to be forces in the SCY pool across free, back and fly.

If there was no cap on individual events, this group of six could very well combine to win every event on the NCAA program other than the 1650 free.

Having such a talented, versatile group of swimmers currently in the NCAA led to this question: if you were the general manager of an ISL team, who would you pick?

Of course, we know the ISL was canceled this year, and whether or not a comeback is in the works remains up in the air. But this is meant to be a fun exercise—similar to projecting entry drafts in the NFL, NHL, etc.—in gauging each of these swimmers’ strengths in an ISL-type format, where athletes can race any number of events and sprinting ability is key in propelling clubs to success.

Asked who they would pick if they were the GM of an expansion club in the ISL, over 41 percent of readers picked Douglass, and it’s hard to argue with that.

The 21-year-old University of Virginia senior’s four best events may well be the 50 free, 200 breast, 100 fly and 200 IM—maybe the most unique combination one could imagine in a sport full of specialists.

Douglass would not only bring a club the ability to win multiple individual events in the ISL, but would also be able to swim any stroke on a relay, be reliable in the skins, and likely score some big jackpots in the 200 breast and 200 IM.

MacNeil, a fifth-year graduate senior at LSU, was second in the poll with nearly 20 percent of the votes.

The Canadian native is the Olympic gold medalist in the 100 fly, the short course world record holder in the 50 back, and also has an NCAA title to her name in the 100 free. While that might not be quite the level of versatility that Douglass has, MacNeil’s sprinting ability is among the best in the world.

Gretchen Walsh finished third in the poll with more than 17 percent of votes, not a surprise given she’s proven to be one of the best short course yards swimmers ever across the 50/100 free, back and fly, not to mention the quickest in the 100 IM.

Alex Walsh was fourth in the poll, with a similar, less sprint-oriented skillset to Douglass.

Walsh would be able to take on events like the 200 fly and 400 IM, where jackpots would be available, and although she’s not a drop-dead sprinter like Douglass, has still proven to be quick across 100 yards in free, breast or fly.

Curzan and Huske, two of the world’s best in both sprint free and fly (with Curzan also a top-tier backstoker), rounded out the results, which speaks to how talent-heavy this group of six is.

Below, vote in our new A3 Performance Poll, which asks: Which men’s event has progressed the most over the last decade?

I don’t see any of these swimmers beating K. Dobler in the 100 breast.

Douglass should choose to go to the ISL when he finishes university
It would be a great experience for her and get out of the university routine.

Someone wanna do the dirty work for this new poll and let us know what the 2012 SCY records were?

This was one of my favorite polls in a while. I think for an expansion draft, with no other considerations of teammates, I end up going Douglass because of her breaststroke being stronger than everyone else’s. Relatively, it’d be easier to fill out the rest of the roster with backstrokers and freestylers.

Just make ISL a fantasy league because at this point, it is only a fantasy!

Not sure about all. Alex probably could but I’d need to see some more endurance from the others.