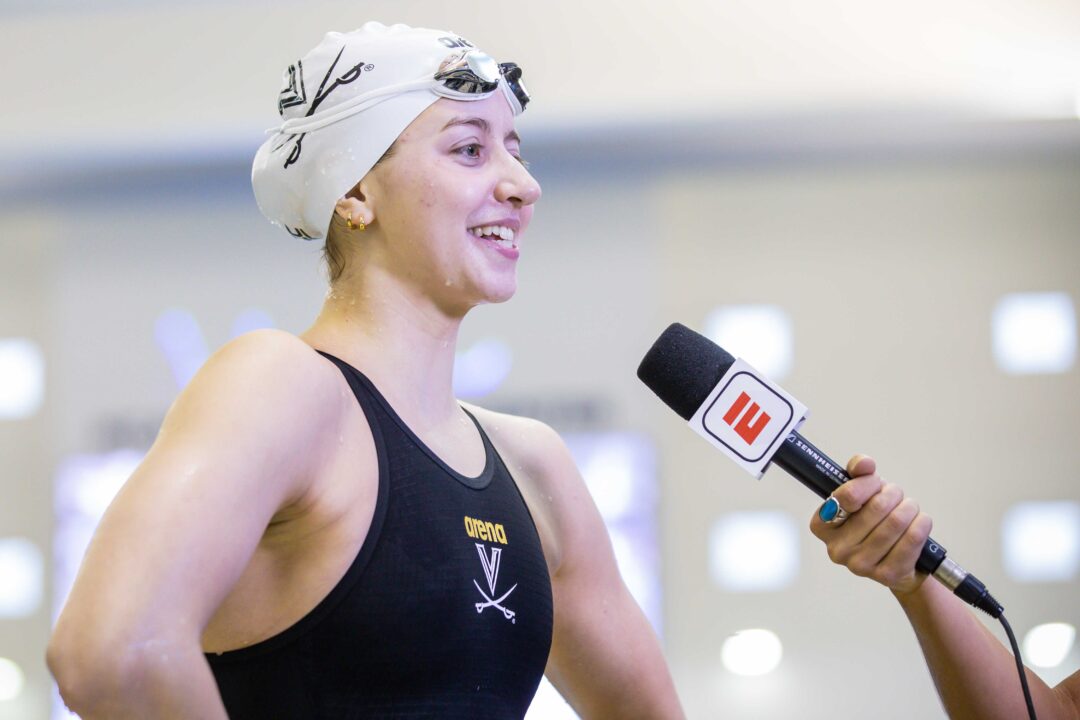 Kate Douglass was among the top performers of last weekend's midseason invites, including setting a new American Record in the women's 200 breaststroke. Archive photo via Jack Spitser/Spitser Photography

The first week of NCAA invites delivered in a big way, as we saw a number of incredible performances across the board.

After the first few months of the season featured some of the fastest unsuited or dual meet times ever, particularly on the women’s side, the midseason invites present the first opportunity for the majority of teams to taper down, try and lock up NCAA qualifying times, and set the tone for what’s to come in the postseason.

The women’s side was highlighted by University of Virginia senior Kate Douglass, who broke her American, NCAA and U.S. Open Record in the 200 breaststroke, swimming a time of 2:01.87 to take down her mark of 2:02.19 at last season’s NCAAs.

Below, we’ve put together the top 16 times across each women’s event from last weekend’s invites.

Some of the country’s top teams have yet to race in a midseason invite, most notably Texas and Cal, who will compete at the Minnesota Invite next week.

It comes as no surprise given her versatility, but UVA’s Alex Walsh ranks either first or second in the three events she raced at the Tennessee Invite, despite the fact she’ll almost certainly take on three entirely different events at NCAAs.

Thanks to swimming data specialist Andrew Mering, we’ve also scored out these times using the NCAA Championship points system. However, there are a few caveats:

The Stanford women came out on top, 63 points clear of Virginia, with relays being the key difference. The Cavaliers did not take part in the 800 free relay at the Tennessee Invite, so they scored zero there, but even without that race factored in the Cardinal would still be ahead.

Again, acknowledging that there was no cap on the number of events for each swimmer, here’s how the individual points shake out:

Ah, Alex Walsh leading the nation in the 500 free after week one of midseasons, just as we expected.

Also didn’t Virginia split up their relays, so their top swimmers weren’t all on the same team?

They did for the 400 Medley. That’s where Douglass’ backstroke time comes from, and they DQ’d their 200 Medley so the time there is from their B relay.

They also split the 200 free relay.

Virginia has more upside than Stanford in addition to the relays scoring more, Tiltmann, Cuomo and Tuggle have no points on these list

Yeah but Tuggle hasn’t been her PB in the 200/500 since she was 13 years old. It’s hard to tell how much upside she really has if she can’t produce times that she did at 13

I’d love to see a nailer nail biter score the last day at NCAAs especially if that means Stanford swims out of their minds.

They haven’t done a mid-season invite yet.

Ahh yes. Thanks. I leapt ahead thinking it was mid-season rankings….