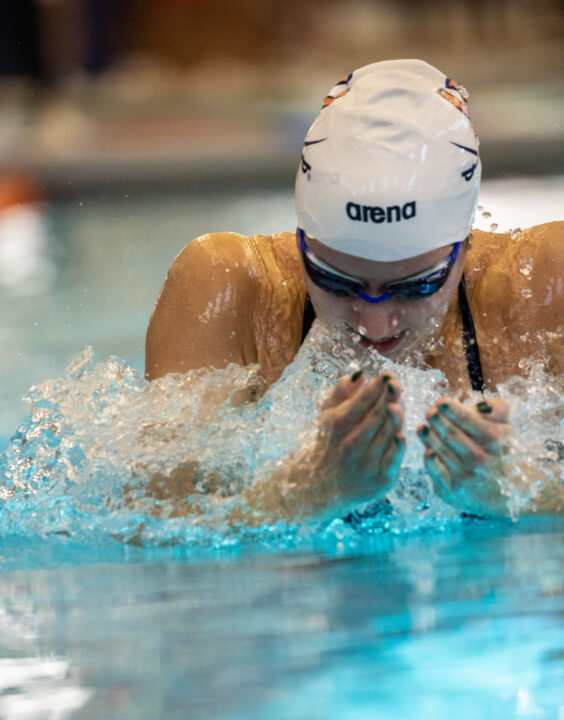 Virginia senior Kate Douglass improved her own best-ever time in the 200 yard breaststroke on Saturday at the Tennessee Invite. Archive photo via Johnny Pace/Virginia Athletics

University of Virginia senior Kate Douglass swam a 2:01.87 in the 200 yard breaststroke on Saturday at the Tennessee Invite. That broke the U.S. Open, NCAA, ACC, University of Virginia, and Tennesee Invite Records, all of which she previously owned, and is now the fastest time in the history of the event at any level.

The previous best time was a 2:02.19 that Douglass swam to win the NCAA title last season. She posted a 2:03.57 in prelims that was the former Meet Record.

Douglass did not enter college with much of a focus in the 200 breaststroke. She swam the race at a few big meets – including the 2017 Speedo Winter Junior Championships, but her best time was just 2:10.59 (from 2016).

After not swimming the event during her senior year of high school, she popped a 2:07.92 – a best time by almost three seconds – in a dual meet in fall 2019, her first time swimming it in college.

She dropped that to 2:06 at the Tennessee Invite, and a 2:05 at the ACC Championships, but we never found out if she would swim it at that year’s NCAA Championship when the meet was canceled by COVID-19.

Then, as a sophomore, she dropped her best to a 2:03.14 in a pre-conference invitational, but didn’t race it at either the ACC or NCAA Championship meets.

As a junior, she swam 2:02.19 to break Lilly King’s all-time record in the event and win her first NCAA title in the 200 breast.

BIg love to UVA for posting the videos, but I wish they’d show the reactions (we know what time times are). Any word on what G. Walsh time-trialed yesterday that resulted in a bunch of hugs and post-race hype?

So has she taken the position of favourite at worlds? I’m still sticking with King. Douglass had some huge hype before Budapest and didn’t really deliver so it’ll be interesting to see how she goes.

Frfr she needs to beat King first then maybe we can hype her to break Wr or whatever, not the other way around lol

Excuse me, but the most boring event is universally agreed to be W1500 free

i’m sorry you don’t have a refined palate

Can’t believe how wrong everybody is. The most boring event is the 800 free relay.

You can’t say JUST a 2:10 out of HS. That’s still elite coming out of HS. Sure she may not have trained/focused on it much then, but still crazy progression and great swim 🤯

Just wondering why KD gets to swim 4 individual events. Thought only 3 were allowed.

At this meet, swimmers were limited to four individual scoring events. They could also swim all five relays. Swimmers could swim more than four individuals, but they’d have to be declared exhibition and would be limited to B finals or below.

On an unrelated note; does anyone know why Claire Tuggle didn’t swim this week? I was hoping to see results on how training at UVa has been for her

School said it was a health-related scratch, but couldn’t be more specific.