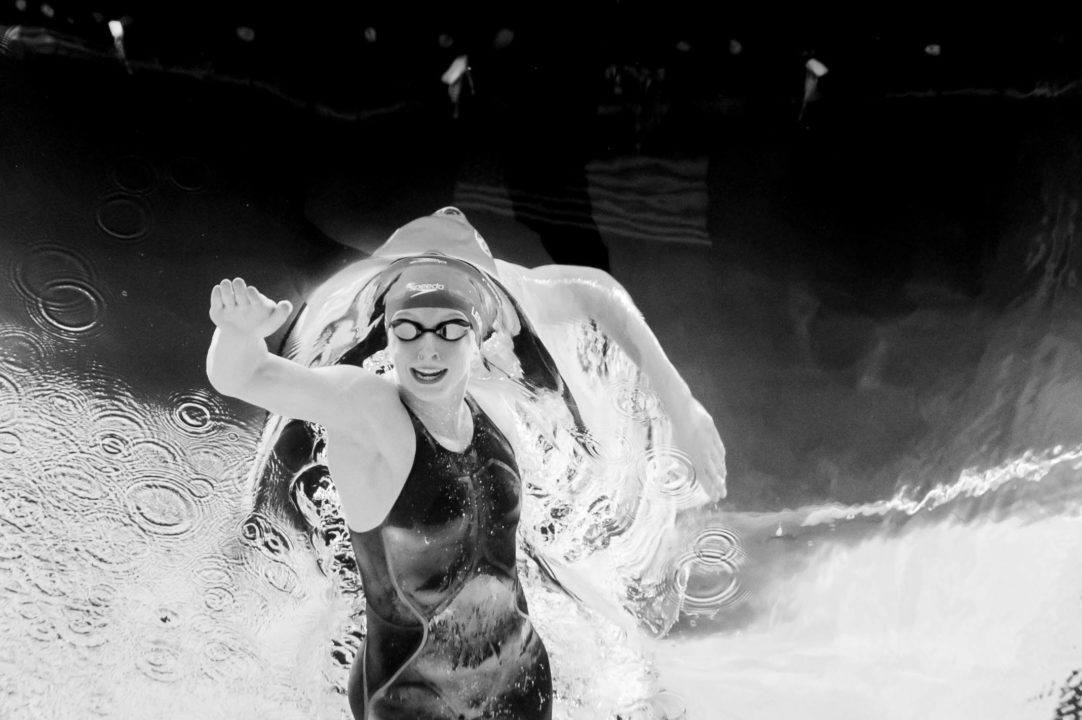 The depth of the Stanford women's team was in full display as they swept half of the events in the meet lineup to win their season-opener against Oregon State. Current photo via Mike Lewis/Ola Vista Photography

The Oregon State Beavers hosted the Stanford Cardinal this afternoon. The pool was filled with some of swimming’s most recognizable names, including Katie Ledecky, whose first collegiate swim has been long awaited after redshirting last season. Stanford won by a score of 141 to 109, while swimming the last four events as exhibition.

The Cardinal are bursting at the seams with talent. They have three Olympic gold medalists in Katie Ledecky, Simone Manuel and Lia Neal. They also have tw0-time individual NCAA Champion Ella Eastin. Combine those athletes with NCAA individual finalists Janet Hu and Ally Howe, not mention freshman recruits who were ranked 6th (Katie Drabot), 8th (Allie Szekely), 11th (Erin Voss) and 14th (Megan Byrnes) in SwimSwam’s high school class of 2016, and you have a group that looks destined for the NCAA team title on paper. Put simply, the Stanford women’s team is young and fast.

Up next, Stanford will host its first meet of the season against Washington State on Thursday, October 20th. For Oregon State, they will compete in UCLA’s Pink Meet on October 22nd, which will also be attended by San Diego, UC Davis and UC Santa Barbara.

STANFORD, Calif. – In a one-day trip to Corvallis and back, the Stanford women’s swimming and diving team opened the season with a 141-109 victory over Oregon State at a soldout Osborn Aquatic Center.

“This is a really fun group and it was a good first trip for us,” said head coach Greg Meehan. “It was nice having our entire team back together, and I think we are all excited for the season ahead.”

In the first event of the year, Janet Hu, Allie Szekely, Simone Manuel and Katie Ledecky won the 200-yard medley relay in 1:42.92. It marked the first collegiate race for Szekely and Ledecky, who also earned their first individual wins of their careers in the 200-yard backstroke (1:57.41) and 100-yard freestyle (50.10), respectively.

In all, Stanford’s freshmen posted four wins as Megan Byrnes and Katie Drabot also earned their first victories. Byrnes touched the wall first in the 1,000-yard freestyle at 9:58.25, and Drabot stopped the clock at 1:47.95 to edge teammate Ella Eastin in the 200-yard freestyle. In addition, Hannah Boyd had the fastest finish in the 500-yard freestyle (5:00.79) in a non-scoring event for the Cardinal.

“I think our freshmen did a great job today,” Meehan said. “But this first trip was more about the experience with their teammates. They probably won’t remember the time from their first race, but they’ll remember the travel and time spent with friends.”

UP NEXT: Its the home opener for the Cardinal against Washington State on Thursday at 2 p.m. There is free admission to Avery Aquatic Center. For those unable to attend, the meet can be seen here.

CORVALLIS, Ore. — The Oregon State swim team suffered a 141-109 loss to Stanford on Friday at Osborn Aquatic Center in front of a sellout crowd of 515 people.

Freshman, Felicia Anderson continued to shave off time in the 100-yard backstroke as she recorded a third place finish with a mark of 56.21 — eight-tenths off her previous best. In the 200-yard backstroke, she again set a new high with a time of 2:02.17 — over two second fasters than her pervious — for a second place finish.

Senior, Czsarina Isleta finished in second in the 100-yard breaststroke with a touch of 1:05.44, nearly tying her season best by one-hundredth of a second.

Senior, Andrea Young posted good times in both the 50-yard and 100-yard freestyle events. Young came in just under a second behind the first-place swimmer in the 50 with a mark of 24.22 and finished in third in the 100 with a time of 52.86.

Oregon State will hit the road next weekend as it heads to Westwood, California for the annual Pink Meet where the Beavers will face UCLA, UC-Santa Barbra, San Diego, UC-Davis and FGCU.

What was? I thought the results were pretty pedestrian considering the names involved

Yeah , and u forgot this is an after Olympic cycle as well . So , it there are pedestrian results , its as it is .

How loaded this team is, I had forgotten who all else they had picked up besides Ledecky. So, yeah, unreal..

Katie Ledecky delayed entry so I don’t believe she was a redshirt. She was not a full-time student; I believe the term grey shirt is the proper term. She still should have 5 years to complete her 4. I believe she could swim 3 years, redshirt the 4th to train for the Olympics, and then swim another year.

Just like WEITZEL won it in the Cal meet lol!! Not a bad time for a sprint freestyler.