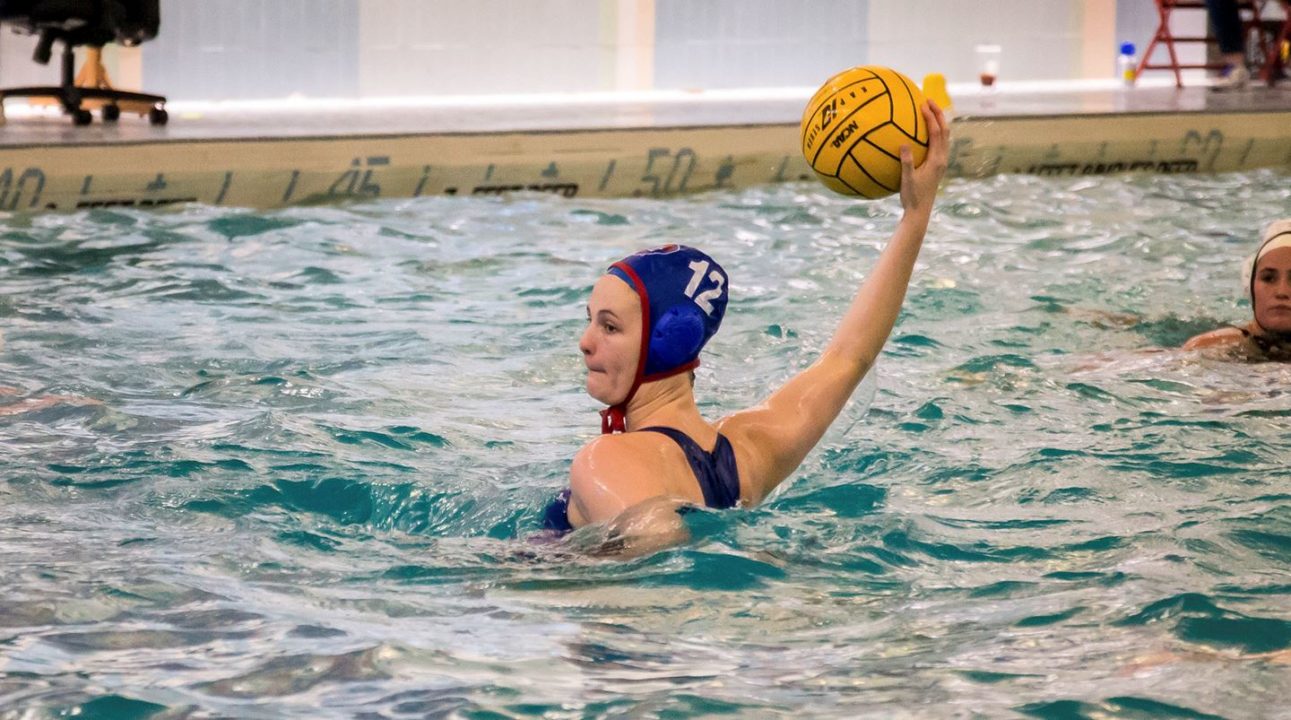 St. Francis Brooklyn’s Kelsey Snelgar broke her own single-season scoring record, upping her tally to 114 goals in 2019 with a 19 score haul last week, including a seven-goal effort vs. Villanova. Current photo via St. Francis Brooklyn Athletics

The FINA Women’s Water Polo World League Super Final 2021 is taking place from June 14-19 in Athens (GRE) and gathers eight of the best teams in the world.

St. Francis Brooklyn’s Kelsey Snelgar broke her own single-season scoring record, upping her tally to 114 goals in 2019 with a 19 score haul last week. She netted seven goals on 10 shot attempts as the Terriers downed Villanova 12-9 on Saturday. Snelgar added four more goals to her season tally in a 24-9 loss to Wagner later in the day, while Tate Renata added three scores. A five-goal effort against LaSalle as the team won 13-9 on Sunday capped the weekend for Snelgar. Snelgar and Renata scored three goals apiece in a 9-7 win over VMI later in the day.

Julie Sellers scored six times, followed by Maddy Steere (4) and Abby Andrews (3) as #6 Michigan crushed Brown 21-2 on Saturday. The Wolverines got four goals from Erin Neustrom and hat tricks from Sellers and Andrews in an 18-1 win over Saint Francis (PA) on Saturday, which included eight scorers and six multi-goal efforts. On Sunday, Steere notched a hat trick as Michigan topped #15 Princeton 9-6.

Monmouth’s Becca Dabrowski put in six goals, but it was not enough as the team lost 18-10 to Salem on Saturday. Dabrowski scored five times in a 14-7 loss to McKendree on Sunday.

#7 Pacific bested #25 Cal Baptist 15-7 on Friday, thanks in part to a five-goal effort by Kyra Christmas. Viktoria Szmodics turned in a hat trick to aid the Tigers among eight scorers in the contest. Christmas added another five-goal effort in a 13-7 win over #13 Loyola Marymount on Saturday, while Brinnley Barthels scored four goals.

Milena Guzman Ortis went 5-for-5 to lead Azusa Pacific in a 12-11 win over Concordia on Friday.

Guarina Garcia put in five goals as LaVerne fell to Pomona-Pitzer 8-6 on Saturday. Jassmine Kezman notched four scores as the Leopards moved past Whittier 10-8 on Wednesday.

Emily Westlove racked up five goals to go with hat tricks by Brianna Mullalley and Kaitlyn Moguel in McKendree’s 14-7 win over Monmouth on Sunday. Westlove put in four goals as McKendree edged Mercyhurst 10-9 in overtime on Saturday. Moguel turned in four goals and Westlove added three as the Bearcats fell to Salem 14-9 later in the day. Abby Burton was 4-for-4 in a 12-3 win over Carthage on Sunday.

#20 San Diego State saw three players turn in four-goal efforts in its 16-6 win over Cal State Monterey Bay on Wednesday. Emily Bennett, Hannah Carrillo and Haley Hagerty led the way for the Aztecs in the win.

Villanova got four goals from Charlotte Curan, but it was not enough to lift the Wildcats past St. Francis Brooklyn on Saturday (12-9). Kate Murray scored four times as Villanova dropped a 12-10 decision to Siena on Sunday.

Madison Martinez scored four times and Karle Linden added a hat trick as LaSalle dropped a 17-11 decision to Marist on Saturday. Sarah Defuso turned in a four-goal effort in a 13-9 loss to St. Francis Brooklyn on Sunday. Martinez chipped in three goals in a 17-9 loss to Iona on Sunday.

#13 Loyola Marymount got three goals each from Morgan Molloy and Marialena Seletopoulou in its 8-4 win over Santa Clara on Friday.

#18 Wagner’s Sofia Diaz Alvarez and Malia Josephson tallied four goals each, while Erica Hardy and Jacqui Sjogren added three apiece in a 24-9 win over St. Francis Brooklyn on Saturday. Three players turned hat tricks for the Seahawks in a 16-12 win over Marist on Saturday: Diaz Alvarez, Josephson and Daisy Nankervis. Hardy and Sjogren put in four goals apiece as the team downed Iona 16-5 on Sunday.

Juliette Belanger netted four goals for George Washington in an 11-7 loss to #23 Bucknell on Sunday.

Lizette Perez scored three goals for #25 Cal Baptist in a 15-7 loss to #7 Pacific on Friday. Perez and Jamie Hutton netted three goals apiece in the Lancers’ 14-10 loss to #15 Fresno State on Saturday.

Concordia (CA) saw three players notch a hat trick in its 12-11 loss to Azusa Pacific on Friday. Madison Ravelo, Shannon Graham and Dailynn Santoro led the way for the Eagles in the match.

Chapman’s Audrey Hattori registered a hat trick in the team’s 11-8 win over Occidental on Wednesday. Hattori added three more scores in the team’s 5-4 loss to Redlands on Saturday.

Occidental got three goals from Abigail Lavold in the loss to Chapman (11-8).

A hat trick from Sami Walker was not enough to lift Redlands past Pomona-Pitzer in a 10-8 overtime loss on Wednesday.

Hannah Buck was 3-for-3 for Santa Clara in the team’s 9-6 win over Cal State East Bay on Thursday.

Maddie Nye managed three scores for Mercyhurst in a 10-9 overtime loss to McKendree on Saturday. Mackenzie Ryburn put in three goals as the Lakers topped Monmouth 13-3 on Sunday.

Claremont-Mudd-Scripps used three goal efforts by Kaitlyn Eng and Amelia Ayala amongst nine goal scorers in a 17-6 win over Cal Tech on Saturday.

Brittany Percin put in three goals for Cal Tech in the loss to CMS on Saturday.

Fresno Pacific got three goals each from Savannah Mangrum and Emma McBride, but fell to Sonoma State 14-13 on Saturday.

Player of the Week: Morgan Jones, UC Irvine – Made 19 saves as the Anteaters topped #4 Hawaii and #9 UC Davis; registered a .625 save percentage vs. the Rainbow Wahine, allowing just six goals, while racking up 10 saves and a steal in the upset; grabbed nine saves for an .818 save percentage, while allowing just two scores vs. the Aggies; chalked up two steals vs. UC Davis

Player of the Week: Ally Furano, Bucknell – Scored 11 goals and tallied six assists as the Bison topped Brown (8-4), #14 Harvard (9-7) and George Washington (11-7); turned in four goals, two assists and two steals vs. Brown; added four scores, an assist and a steal in the upset win over Harvard; finished the weekend with three goals, three assists and a drawn ejection vs. GW.

Defensive Player of the Week: Georgia Lewis, Bucknell – Notched 29 saves as the Bison went 3-0 in CWPA action; made nine saves vs. Brown; grabbed seven saves in the upset of Harvard and a season-high 13 against George Washington

GCC
Player of the Week: Kyra Christmas, Pacific – Scored five goals apiece in wins over #25 Cal Baptist and #13 Loyola Marymount; added three assists on the week and shot .667 from the field

Offensive Player of the Week: Kelsey Snelgar, St. Francis Brooklyn – Broke the Terriers’ single season scoring record, scoring 19 times to up her tally to 114 on the year; put in seven goals and an assist in a win over Villanova; added four scores against Wagner, five against LaSalle and three against VMI

Defensive Player of the Week: Isabel French, VMI – Made 46 saves as the Keydets went 2-2; posted a 57.5 save percentage and two steals; notched 29 saves on Saturday, allowing just 13 goals vs. LaSalle and Siena

Rookie of the Week: Jillian Schultz, Iona – Scored 16 goals on 30 shots and drew 12 kickouts; scored twice in the Gaels’ 14-13 win over Siena; put in five goals in a win over Villanova; added three goals against Wagner; netted a career-best six goals on nine shots vs. LaSalle

Player of the Week: Makenzie Fischer, Stanford – Scored five of the team’s seven goals in a 7-6 victory over #3 UCLA; upped her season tally to 65 scores, most in the MPSF (4.06 per game)

Defensive Athlete of the Week: Bailey Meyer, Cal Lutheran – Notched 25 saves in wins over Claremont-Mudd-Scripps (7-6) and Occidental (15-1); stopped 10 shots vs. CMS and saved 15 while adding a steal and two assists vs. Occidental

Player of the Week: Margherita Garibbo, Salem – Helped the Tigers to a 4-0 weekend at the McKendree Invite with 19 goals and four assists; put in five goals and added three assists in a win over Monmouth (18-10); added a season-high seven scores in a win over McKendree (14-9); notched five scores in a 10-8 overtime win vs. Mercyhurst.