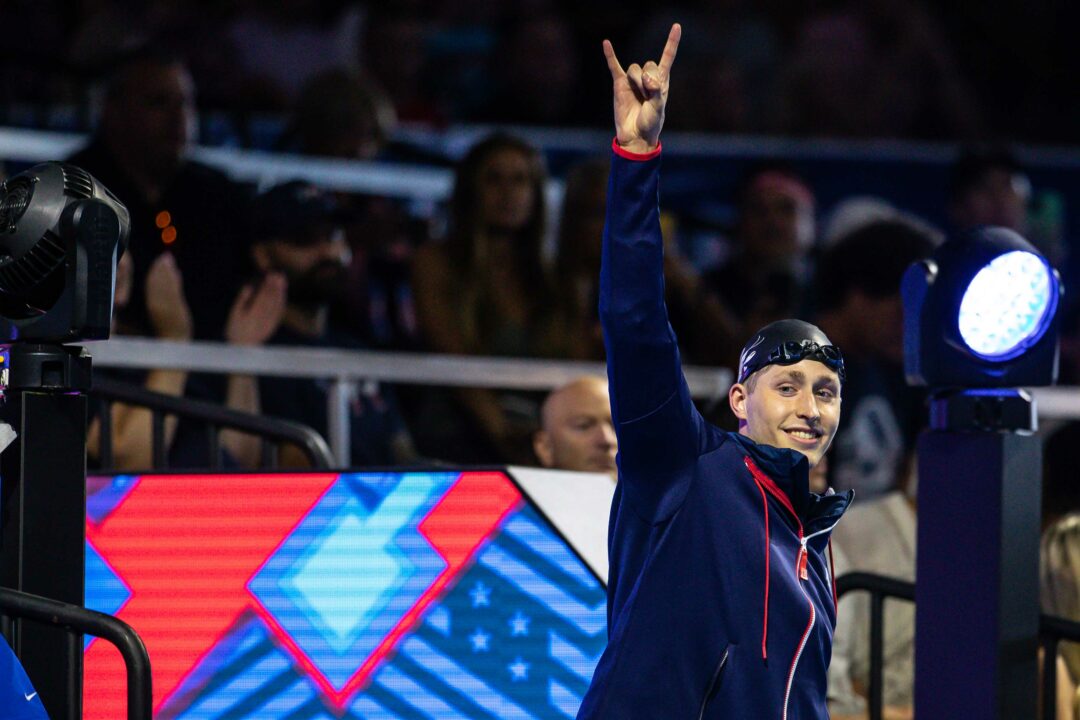 Yes, the Tokyo 2020 Olympics have ended, but there is still more competitive swimming happening around the nation! This week will be the dual-site 2021 Speedo Summer Championships, hosted in Irvine, CA and Greensboro, GA. Starting tomorrow, some of the best swimmers from the Eastern states will compete in this five-day affair at the notable Greensboro Aquatic Center. Highlighting the meet psych sheets include a number of U.S. Trials semifinalists and finalists, including 5th-place finishers 18-year-old Josh Matheny and Sam Stewart, and 200 free 7th-place finisher Gabby DeLoof.

Josh Matheny of Pittsburgh headlines both the men’s 100 breast and 200 breast events in Greensboro with his respective seed times of 1:00.06 and 2:09.40. Matheny’s 1:00.06 lifetime best came out of the U.S. Trials prelims, qualifying him into the semifinals rounds. Matheny advanced all the way to the final, where he finished in 5th place at 1:00.22 behind Kevin Cordes. In the 200 breast, Matheny missed out on semifinals, placing 20th overall.

Note: Greensboro and Irvine results will not be officially combined, SwimSwam will be combining results on our own.

The hype for this meet is 0, just cancel it and let us enjoy the olympics!!!

You want everyone else to quit swimming because they didn’t make the Olympic team?

No, I want USA swimming to give us a break from these high level meets so we could be excited and give these athletes the recognition they deserve instead of still beinng focused on the olympics.

26 USA women and 26 USA men made the olympic team….that leaves dozens, hundreds, thousands of USA swimmers who did not, who still have a season they swam through, and looking to swim at a championship meet somewhere at the end of the season…put it into perspective, man!

Cancel this meet, Heck NO. Make it better by limiting Futures to below Junior National Swimmers. This meet is much bigger than the normal, after Trials US Open. It could be great, but the BRAINS at USA Swimming decided to water it down.

It is first time Us open and jrs are combined, but split to keep numbers down for covid. The total between the 2 meets is about the same as most post olympic us open/jrs

East looks deeper for some reason

Yea, frankly Futures has become a lot more popular than JNATs as a summer championship meet. Even if they have a Summer Juniors cut, a lot of people are just more inclined to go to Futures since they can typically swim more events. Futures has become overrun by college swimmers and juniors who are significantly below the time standards. Pretty much defeats the purpose of that USA Swimming had in mind for these meets.

The LC swimming is already a problematic issue in the US. Cancel these meets, and you won’t be able to send swimmers to the Olympics in the near future. Even if you do, they won’t make the final. Think “vertically.”

The swimming portion of the Olympics finished last week.

Surprised to see the Deloof girls still swimming. I thought I read that Ali was retiring after trials, to start her teaching career??

Horns Down. Wait a minute, is that now an unsportsmanlike conduct penalty?

It won’t be in a couple years. The big boys and girls in the SEC will laugh them back across the Mississippi if they try that nonsense.

Eyes on Claire Weinstein. She’s part of the best US prospects in women’s mid-distance freestyle.
Will the legendary and antique 200 free 13/14 NAG record of Sippy Woodhead finally fall this week?