Speedo Fastskin – A History of the World’s Fastest Swimsuits 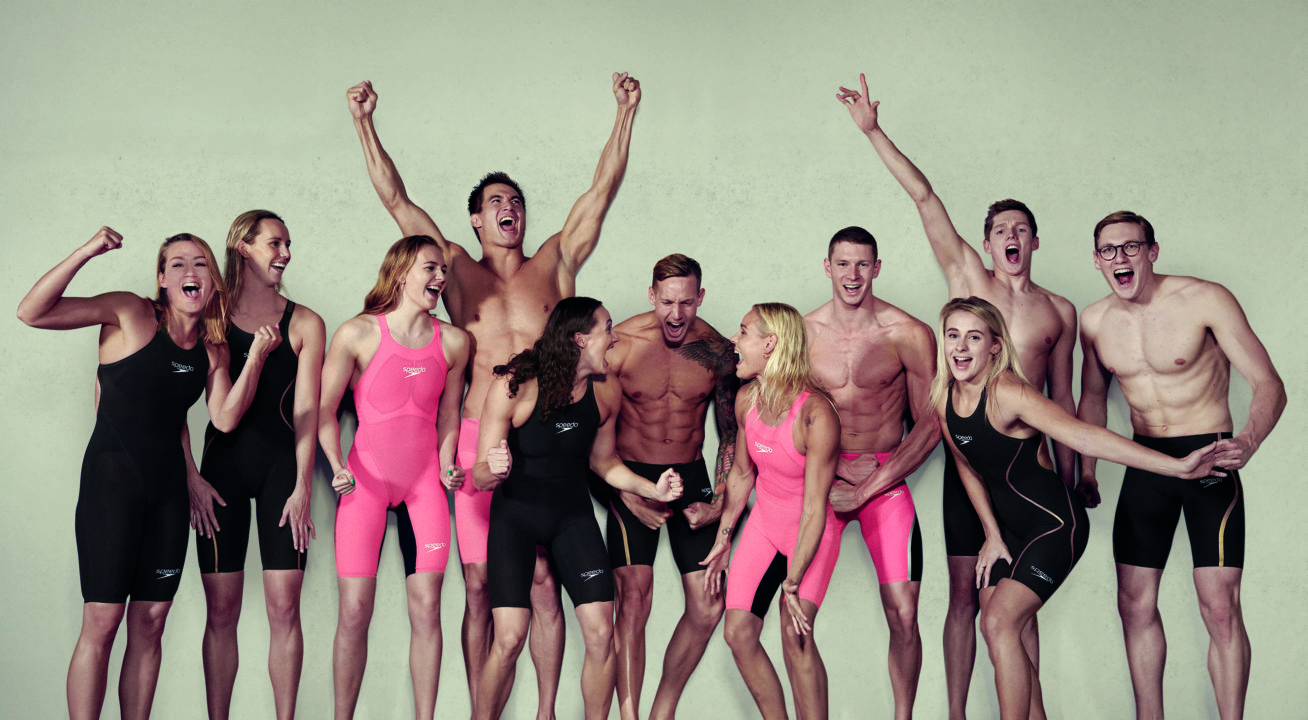 Inspired by the varying skin texture of a shark, the original Fastskin suit came with compression and ridges in key areas as Speedo developed a fabric which mimicked nature and helped swimmers glide through the water. Current photo via Speedo

courtesy of Speedo, a SwimSwam partner

Ever since Arne Borg set a world record whilst wearing Speedo in 1929, the company has been committed to helping swimmers go as fast as they can in the water.

By constantly pushing the boundaries of innovation and new technologies, Speedo was routinely the brand of choice for Olympic and World Gold-winning swimmers thanks to features which reduced drag and surface resistance, as well as being the first to use fabrics such as nylon in their swimsuits.

However, the Speedo development team – based in the company’s Aqualab centre – refused to rest on its laurels and, in 2000, the firm introduced the world to its pioneering Fastskin swimsuit.

Inspired by the varying skin texture of a shark, the original Fastskin suit came with compression and ridges in key areas as Speedo developed a fabric which mimicked nature and helped swimmers glide through the water. At the Olympic Games in Sydney later that year, 83% of swimmers who won a medal were wearing the suit.
At the same Games, 13 of the 15 world records which were broken were done so by swimmers wearing the new Fastskin suits. As a result, its designer was shortlisted for European Inventor of the Year, signaling that a new dawn had broken in the world of swimming.

Four years later, Speedo launched the Fastskin II following research and development which included using a body scanner regularly used in Hollywood whilst working with a special effects company which had recently worked on the latest Spiderman movie.

Fronted by Michael Phelps, the suit was worn by swimmers who notched up 47 medals at the Olympic Games in Athens. Historically, whilst wearing the Fastskin II, Phelps became the first person to win eight medals at a single Games.

The Fastskin legacy continued in 2007 when the Fastskin FS-PRO was unveiled. The suit was the fastest and most powerful lightweight suit on the market and within six months of its launch, 21 world records had been broken whilst wearing the suit.

However, just a year later, Speedo would shock the swimming world with the launch of the Fastskin LZR Racer. The suit was Speedo’s smoothest offering yet, having worked with biomechanical engineers, physiologists and more than 100 elite swimmers, as well as NASA, in the development stage.

At the 2008 Beijing Olympics Games, Phelps went one better than before, scooping eight golds in a single Games. In fact, 94% of victorious swimmers – and 98% of those who won any swimming medal – in Beijing were wearing the latest suit.

As the world records continued to tumble, FINA –the sport’s governing body – changed the legislation around the body-length swimsuits and certain fabrics, effectively banning Speedo’s latest suit for being too fast. Continuing its commitment to sustainable fashion, Speedo sent its surplus of stock to London’s Chelsea College of Art and Design to aid their projects.

In response, the Speedo team went back to the Aqualab and applied the same hydrodynamic principles to create a new FINA-approved Fastskin LZR collection, which catered for everybody from grass roots to elite-level swimmers. The collection was launched in 2009.

Two years later, ahead of the 2012 Olympic Games, Speedo unveiled its Fastkin3 racing system, consisting of a new cap, goggle and competition suit. The system featured fit point markers which allowed the three items to line-up and helped the swimmers gain the ideal fit and become one with the suit.

The next year in London more swimmers wore Speedo than any other brand, with 57% of all swimming medals won by Speedo athletes, including the four gold and two silver won by Phelps to make him the most decorated Olympian of all-time. All of those 22 medals had been won in Speedo.

In 2013, Speedo updated the Fastskin racing system by releasing the Fastskin LR Racer Elite 2, offering 40% more durability in water repellancy, together with a bright new range of colourways.

Two years later, The Fastskin LZR Racer X was launched to help swimmers feel their fastest by combining compression, construction, sensitivity and support to give the swimmers the feeling of being fast, which in turn led to real improvements in performance.

Now, ahead of a huge year in the swimming world, Speedo has unveiled the Fastskin LZR Pure Intent and LZR Pure Valor, as well as the Pure Focus goggle, as Speedo looks to continue its proud record of being the brand worn most by Olympic gold medallists great just something about Fastskin continues to pioneer innovation and technology to help swimmers swim their fastest etc. each Fastskin suit has been about progress.