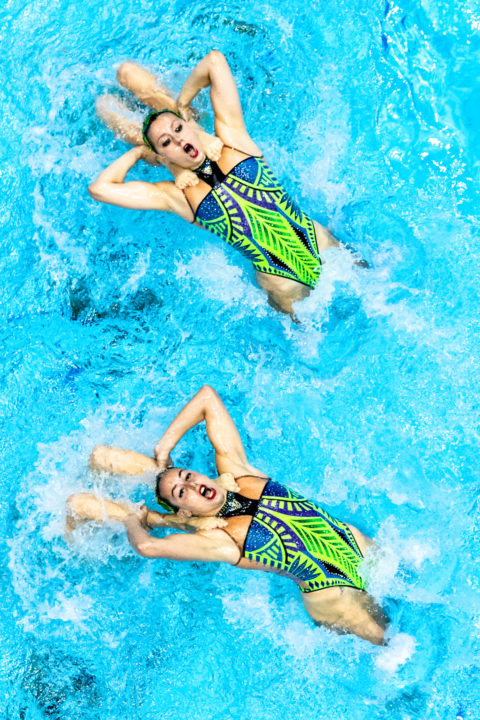 Winning three of four events to conclude the final day in Paris, Spain finished the second leg of the FINA Artistic Swimming World Series with a flourish. Archive photo via Giorgio Scala/Deepbluemedia/Insidefoto

After winning both the Mixed Duet and the Team Free events earlier in the competition, Spain topped the medal table with five gold medals, followed by the USA with three gold and two silver. Host country France occupied third place with two gold and two bronze medals.

The competition on day three in Paris started with the Mixed Duet Technical event.  Veterans and multiple ASWS gold medalist Spanish duo Emma Garcia and Pau Ribes, competing together since 2018, performed their routine Witch Hunters, inspired by a yearly Festival of Witches in the village they live in Spain, earned 84.3804 points to add another gold to their impressive collection of medals.

The USA’s Ivy Davis and Kenneth Gaudet, another debuting duet on the Senior World Stage, swam the routine, inspired by the movie Venom to music by rapper Eminem.  The choreography tells the story of the similarity between a human and an alien. Davis and Gaudet beautifully demonstrated their contrasting strengths and scored 79.0104 points for their first World Series silver medal.

The Colombian duo Jennifer Cerquera and Gustavo Sanchez received 77.7850 points to claim the bronze medal for their routine Constellations swum to Age of Gods by Thomas Bergersen.

Winning their third gold medal at this leg of the World Series, the young team representing the USA proved that the Americans are doing things right.

The team scored 86.0680 points for their entertaining and creative routine, which had the crowd in Paris excited and clapping along. The choreography performed to Michael Jackson’s Smooth Criminal was cleverly filled with many of the singer’s signature moves.

Finishing in second place for the silver medal with 84.7341 points was the team from Canada, who choreographed their fast and fun routine to a compilation of hip-hop and rap music. Participation in the World Series is key for this newly formed team that has its sights set on the Paris 2024 Olympics.

Performing the routine Planets of the Universe the Israeli team scored 82.5568 to claim the last step on the podium and another bronze medal, their fifth medal at this World Series leg.

After winning the gold medal in the Technical Mixed Duet, Emma Garcia and Pau Ribes demonstrated their dominance in the Mixed Duet events by scoring 85.5667 and winning another gold medal for Spain. This routine, choreographed to music from the musical Cats, showcased their athleticism and strength in the lifts with great heights.

USA’s Kenneth Gaudet, now paired with Claudia Coletti, established his presence in the Mixed Duet events by winning a second silver medal in Paris. Displaying the contrasting male strength and the female beauty in the risky routine Attack on Titan, the pair was able to execute all the difficult lifts and hybrids to receive 83.0333 points from the judges.

Italians Nicolo’ Ogliari and Federica Sala, already individual winners of silver medals in the Solo Free events here in Paris, paired up and scored 82.3667 for their routine, securing the bronze medal, Italy’s third one in Paris.

In the final event of the day, the athletes from Spain convincingly claimed the gold medal with 90.7000 points Their routine was creative and technically challenging, depicting the movement of the birds from the Galapagos Islands. The colours of their bathing suits were gorgeous and added to the beauty of this performance.

The Canadian team, a combination of returning Olympians and talented young newcomers, were able to connect with one another in their routine Triumph. The choreography captures the powerful emotions in the music produced by Two Steps from Hell with challenging acrobatic lifts, high throws, and strong propulsion. Canada scored 85.7667 points and collected their fourth silver medal at this World Series stop.

With 84.4667 points for the routine themed The Planet the team from Israel won the bronze medal, their sixth medal of this World Series leg.