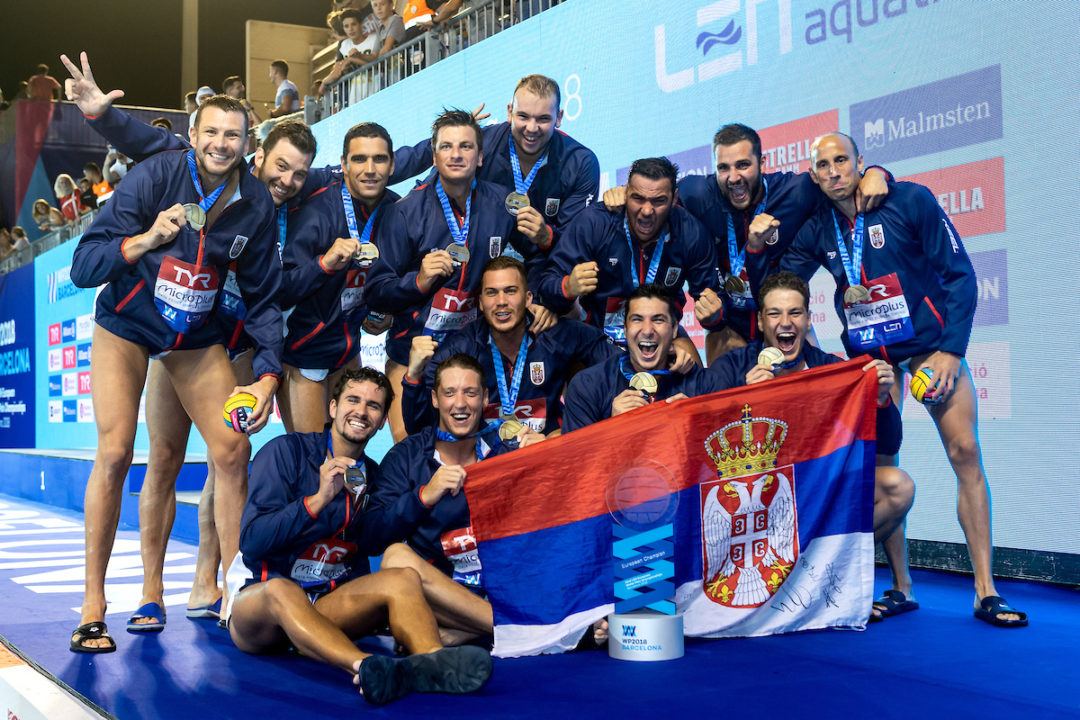 Serbia squeaked past Croatia for the gold, earning its 10th Super Final title, and more importantly a ticket to the 2020 Olympics, with a 12-11 win. Archive photo via LEN Media

Serbia squeaked past Croatia in the championship match, earning its 10th Super Final title since 2007, and more importantly a ticket to the 2020 Olympics, with a 12-11 win on a penalty shot with 17 seconds to play.

Australia denied Spain a second straight bronze medal with an 11-10 victory, which saw the Spaniards notch the first ever goal by a goalkeeper in an attack. The Aussies instead claimed their first Super FInal medal since back to back bronzes in 2007 and 2008.

Hungary held off Japan for fifth place and Kazakhstan recorded its first win of the week, topping Canada in penalties for seventh.

Tournament MVP Filip Filipovic put in four goals, including the game-winning penalty, alongside Dusan Mandic for Serbia as the victors rallied from down 3-1 and later 8-7 in the final quarter to steal away the gold medal from Croatia.

All told, the reigning Olympic champions from Serbia scored 4 of 10 man-up opportunities and on both of its penalties en route to the win.

Ante Vukicevic netted five goals for the reigning world champions from Croatia, while Loren Fatovic put in two. Croatia was the more efficient offense, putting in 11 of 28 shots, including 6 of 10 extra-man tries and all three of its penalties.

Croatia made two penalties in the opening stanza on the way to a 3-1 advantage. Down 4-1 after another penalty just 25 seconds into the second period, Serbia mounted a comeback, scoring five in a row over the next six minutes. Mandic accounted for the first and the last of those (6:40, 1:16).

Croatia recovered with two goals, a counter attack by Vukicevic and an extra-man try by Fatovic to go up 7-6. An action shot by Andro Buslje made it 8-7 with eight minutes remaining as a downpour began to fall.

A man-up goal by Nikola Jaksic and action shots by Mandic and Filipovic knotted the score at 10 with 2:52 to play. Filipovic gave the Serbs an 11-10 lead with 1:05 left, but Vukicevic countered with 29 seconds remaining. A penalty was called with 17 ticks on the clock and Filipovic buried the game winner to clinch the gold.

“It was a fantastic game, full of great turns, first the Croatians could take a three-goal lead, then we turned it back, they reacted well, but we also did great in the last period,” Serbian coach Dejan Savic said. “What really gave us the edge that even if the rain came down, no fans left the stands, they stayed and cheered for us. Under these circumstances we had to win.”

Australia built a 3-1 cushion in the first quarter and needed every bit of it as Spain charged back to tie three times, before succumbing. It was a historic game, however, as Spain’s Daniel Lopez Pinedo became the first goalkeeper to “join his team’s attack and score,” doing so with just 24 seconds left.

Joseph Kayes scored four times and Aaron Younger added a hat trick to lead the Aussies. The team netted 11 of its 25 shots (44 percent), including 4 of 7 extra-man tries.

An action shot by Blake Edwards and an extra-man try by Younger put Australia up three at 7-4. Spain countered with four of the next six scores to pull within one at 9-8 on a Mallarach Guell goal with 39 seconds left in the third period.

Munarriz Egana leveled the score with 4:33 to play, but Kayes (3:20) and Richard Campbell (2:31) gave the Aussies some breathing room. Pinedo scored with 24 seconds left to give Spain a late chance, but nothing more was to come.

“I feel really moved that my team could win this medal, a second one within a year at a FINA event (also silver at the 2018 World Cup),” Australia coach Elvis Fatovic said. “The boys deserve all the credits, they fought with their hearts, they didn’t collapse mentally when Spain could equalize after a long battle, instead, they managed to score again and again. I am really proud of them.”

Hungary boasted an 8-5 lead at the half and held on for the win and fifth place.

Toni Josef Nemet, Bence Batori and Krisztian Bedo notched hat tricks to lead the Hungarian offense, which hit 15 of its 32 shots (46.9 percent). Hungary made good on 80 percent of its extra-man tries (4 of 5) and converted three of its four penalties.

Hungary scored first, but Japan built a one-goal lead twice (2-1 and 3-2). Six different players scored as the Hungarians ended the first quarter with two scores and poured on four more to lead 8-5 at the half.

Down 9-5, Japan cut the margin in half with scores by Inaba and Okawa, but Pasztor converted a penalty to push the edge to 10-7 with eight minutes to play.

Hungary used a penalty, a counter attack, an action shot and an extra-man goal to boost the advantage to seven at 14-7. Japan began to chip away from there, getting as close at two as Shiga netted the final goal with 13 seconds left.

“We played according to our game plan which included practicing a couple of defensive schemes and that worked well,” Hungarian coach Tamas Marcz said. “Our concentration level dropped in the fourth period once we achieved a multiple-lead, credits go to Japan that they didn’t give in and wanted to decrease the gap which they finally managed to do. Perhaps that shouldn’t have happened but at the end of the day, we won, finished fifth, for this team this is the reality. Beforehand I thought we could make the semis, I wished to see these players battling against Croatia or Serbia, we just missed that chance by a fingernail so I’m not really disappointed what I saw from the team.”

Kazakhstan earned its first victory of the Super Final, rallying from down 7-5 at the half with an eight goal output over the final 16 minutes to send the game to penalties, before securing the win with a 4-3 advantage.

Kazakhstan converted 13 of its 31 shots (41.9 percent), including 8 of 15 extra man opportunities. Maxim Zhardan did the heavy lifting with five goals, while Murat Shakenov and Stanislav Shvedov added hat tricks. Goalkeeper Valeriy Shlemov stopped 50 percent of the shots he faced (9 of 18) and saved one of three penalties.

Canada put in 13 of its 29 shots (44.8 percent), including 6 of 15 extra man chances and one of its two penalty tries in regulation. Nicolas Constantin scored six times, while Reuel D’Souza added four goals. Dusan Aleksic made 10 stops between the pipes (of 23) and stopped one of five penalties.

Canada scored first, but the Kazakhs answered with two goals in under a minute (Zhardan 5:28; Altay Altayev 4:43) to vault ahead. The Canadians scored three in a row, two by D’Souza, to take a 4-2 advantage into the second quarter.

Kazakhstan pulled into a 5-all tie with 3:18 left in the half with three extra-man goals. Constantin-Biecari and Jeremie Cote gave Canada a 7-5 edge at the break.

Shakenov tied it up at 11, but Constantin-Biecari found the back of the net twice to give Canada a 13-11 lead with 2:46 to go. Ravil Manafov was sent off with a red card, but Kazakhstan recovered with an extra player goal by Roman Pilipenko (2:12) and Shakenov (1:26). Shlemov made two saves and a third Canadian shot was blocked down the stretch.

In the shootout, both teams converted their first two tries. Matthew Halajian missed for Canada, while Alexey Shmider had his attempt saved. A save by Shlemov opened the door for the Kazakhs and Shvedov marched through it. Alexa Gardijan knotted it up for Canada, but Miras Aubakirov hit the final attempt for Kazakhstan to give the team seventh place and the 17-16 win.

“We had the chance to have a bigger lead, missed a penalty to go plus three but it’s really hard for this young team to play on a consistent level especially on the sixth day,” Canadian coach Pino Porzio said. “Also, it’s a bit unusual for these players to approach a game in a tournament like this that they considered a kind of favorite. Today we made too many mistakes in defense, scoring 13 goals it’s fine but conceding 13 means that our defense didn’t work well. Anyway, it was a great experience, they could learn a lot here.”