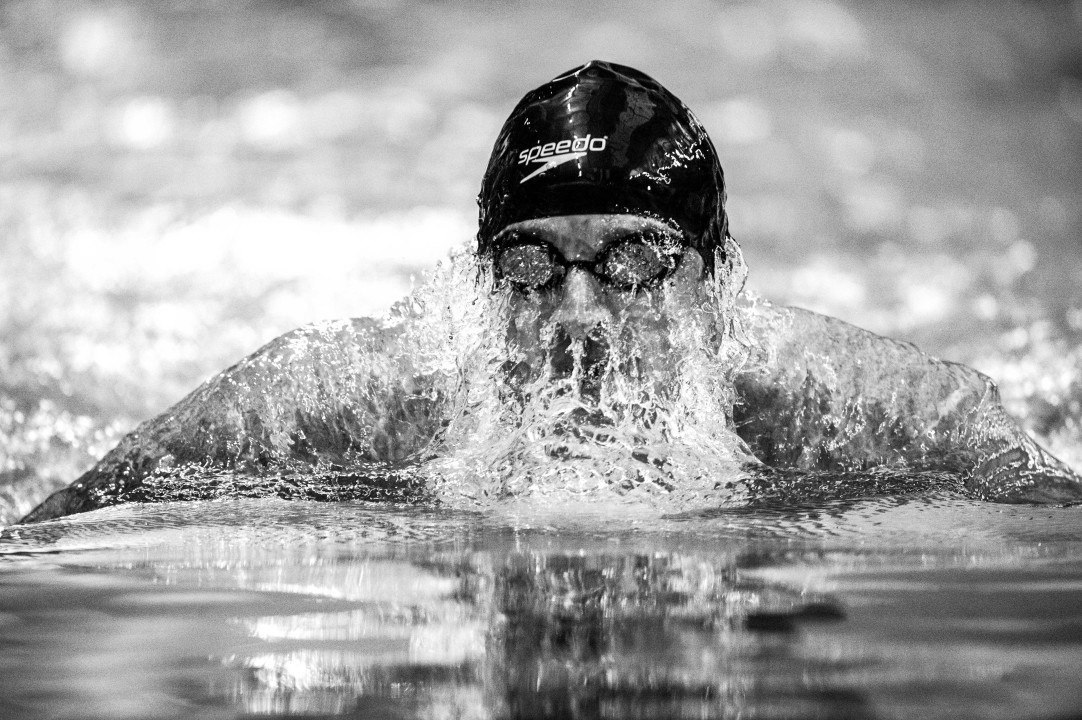 47-year-old Steve West has done it again, this morning lowering his own month-old masters world record in the 100 LCM breaststroke down to 1:04.84. Current photo via Mike Lewis/Ola Vista Photography

47-year-old Steve West has done it again, this morning lowering his own month-old masters world record of 1:04.99 down to a 1:04.84 at the 2019 Mission Viejo Meet of Champions. West, who swims for Irvine Novaquatics Masters, has now broken the masters world record for the 45-49 age bracket in the 100 LCM breaststroke three times in the past 13 months.

Though West qualified 9th after prelims he has scratched finals and will not seek to improve upon his new record this evening. Leading the men’s 100 breaststroke tonight is 2016 Olympic champion in the 200 breaststroke, Kazakhstan’s Dmitriy Balandin (1:01.40), who is followed by China’s Yan Zibei (1:01.80). Tuscon-Ford’s Sam Ida and China’s Zhang Ruixuan tied for third with a 1:02.74.

In Saturday prelims West swam a 2:21.39 in the 200 breast to rank 13th among finals qualifiers, though he also scratched the finals of the longer distance.

LCM? Sure it wasn’t SCM? Either way, absurdly fast.

5
0
Reply
JP input is too short
Reply to  luigi

5
0
Reply
DMacNCheez
Reply to  JP input is too short

19
0
Reply
Luigi
Reply to  JP input is too short

Yes, JP. I was just noting that the WR in an older group is faster. He also has 30.02 in the 50 breast LC. And I believe other records in the IMs.

Is this count according to FINA?
As I believe it should be in a masters championchip not Elite.
Otherwise the record of Micheal phelps in Rio should be counted in masters of age of 30/34?

SMOC is a dual sanctioned meet… Phelps wasn’t registered as masters swimmer when he did those times.