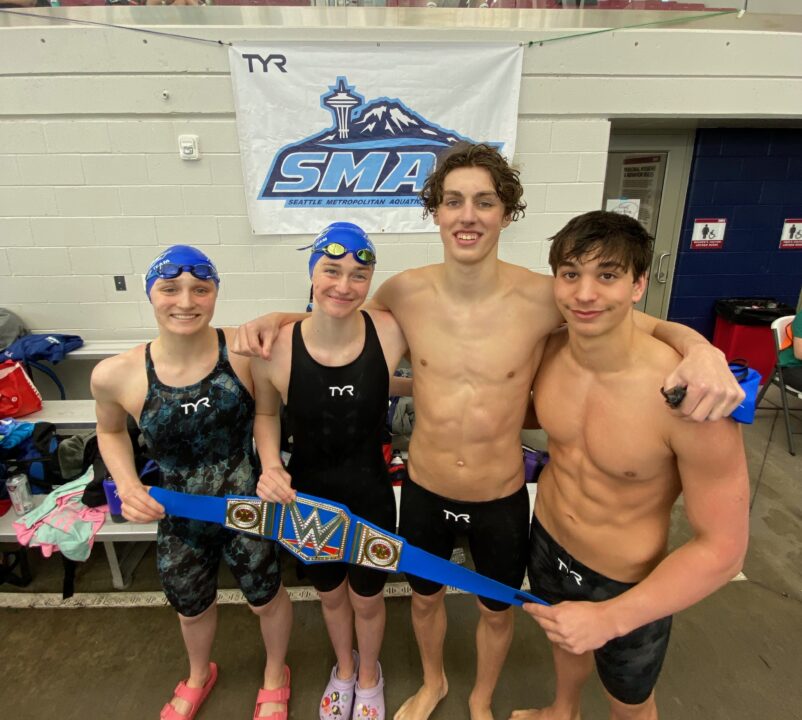 On Friday, the Seattle Metropolitan Aquatic Club broke the National Age Group Record in the 15-16 200-yard mixed medley relay. The record was broken at the 2022 Western Zone SCY Senior Zones, which is currently being hosted in St. George, Utah.

The SMAC team, which consisted of Catherine Andrews, Jack Skarda, Ella Jablonski, and Benjamin Bricca combined to stop the clock at 1:36.48. That time shatters the previous NAG Record set by Nation’s Capital Swim Club in 2019.

Notably, NCAP’s old record opted for the traditional M/M/F/F lineup, while SMAC’s new record used a F/M/F/M lineup. Their splits aren’t entirely comparable, but both teams had similar male breaststroke splits. SMAC’s female flyer Ella Jablonski was almost 1.5 seconds faster than NCAP’s female flyer. Jablonski boasts a personal best of 24.68 in the 50 fly from the 2021 PN Winter SC Championships. In this meet, she dropped .5 seconds in her fly split from the women’s 200 medley relay (23.8) on Wednesday to the mixed medley on Friday (23.3).

23.3 as a HS freshman cooks something fierce