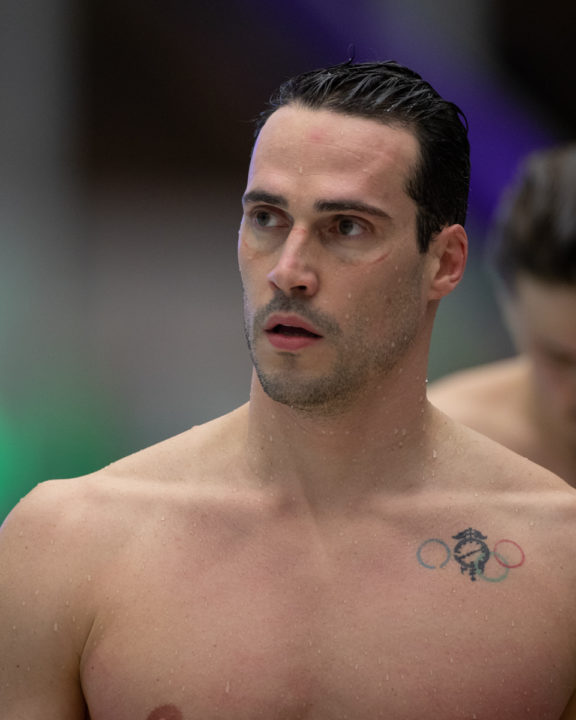 Fabio Scozzoli's victory in the men's 50m breaststroke tonight helped inch Italy up its way to the top of the Mediterranean Games medal table through day 2. Archive photo via “Rafael/Domeyko Photography”

We saw plenty of action in Oran, Algeria on day two of these Mediterranean Games, with the nations of Italy, Turkey, Greece and more collecting more hardware.

More meet records bit the dust with three days of racing yet to unfold at this quadrennial competition.

Coming within .30 of her own national record, Greek fly ace Anna Ntountounaki scored gold in the 50m sprint to kick off day two of the Mediterranean Games.

Hitting the only time under the 26-second threshold, Ntountounaki led a pair of Italians, with Viola Scotto di Carlo snagging silver in 26.25 while teammate Sonia Laquintana rounded out the top 3 in 26.38.

Gold is a big upgrade from Ntountounaki’s 4th place finish at the 2018 edition of these Games, while she more recently placed 10th after the 50m fly semi-finals at this year’s World Championships (25.89).

Italy’s Fabio Scozzoli found success in the men’s 50m breast, firing off a new championships record in the event en route to gold.

The 33-year-old mainstay produced a time of 26.97, getting to the wall just.03 ahead of Turkish speedster Emre Sakci. Sakci settled for silver in 27.00 while Slovenia’s Peter John Stevens also landed on the podium in 27.46 for bronze.

Scozzoli and Stevens repeated their podium placement from the 2018 Mediterranean Games, although Scozzoli was slower 4 years ago with a winning time of 27.25 while Stevens was faster in the past with 27.32. Sakci was 4th in 27.48 at that meet in Tarragona, Spain.

21-year-old Janja Segel led a 1-2 Slovenian punch in this women’s 200m freestyle, producing a time of 1:56.68 to take the event title in a new championship record-setting effort.

Opening in 57.04 and closing in 59.64, Segel busted out the fastest time of her career. Entering this meet, she was ranked as the nation’s #2 performer all time with a PB of 1:57.32 from just this past May. Only national record holder Sara Isakovic had been faster with the Slovenian standard of 1:54.97 from way back at the 2008 Olympic Games.

Although still far away from that mark, Segel has entered new territory with her first-ever 1:56-range time, while teammate Katja Fain‘s 1:57.49 checked in as her personal best as well. She shaved .34 off of the 1:57.83 she also logged in May of this year.

Although the men’s 100m free was on the slightly sluggish side, it was indeed a close race. The top 3 finishers were only separated by .12, with two Italians bookending the podium with a Portuguese swimmer in the middle.

Filippo Megli wound up on top in 49.00, while teammate Allessandro Bori was good enough for bronze in 49.12. It was yesterday’s 50m fly winner, Diogo Ribeiro of Portugal, just 17 years of age, who snagged silver in 49.02 tonight.

Of note, the championships record in this event remains at the rapid 47.83 Frenchman Alain Bernard put up at the 2009 edition of this quadrennial Games.

An entirely new podium replaced the one from the 2008 Mediterranean Games in the women’s 100m breaststroke, with Italy’s Lisa Angiolini winding up with the gold. She produced a time of 1:07.59 as the only sub-1:08 swimmer of the field, with her mark here checking in as the 5th fastest performance of her career.

Her teammate Anita Bozzatto was not terribly far behind, clocking 1:08.14 for silver, keeping Turkish breaststroker Viktoria Gunes at bay. Gunes, who placed 5th in this same event 4 years ago, got onto the podium with the bronze in 1:08.44 tonight.

Italy got on the board with another gold on the night, as Pier Matteazzi wrangled up the win in the men’s 400m IM.

Earning a time of 4:13.83, the 24-year-old topped the podium decisively, beating the field by nearly 6 seconds.

The Turks reaped both gold and silver in this women’s 800m freestyle, led by 17-year-old Merve Tuncel. Tuncel clinched the win in a time of 8:26.80 while her compatriot Deniz Ertan was tonight’s runner-up in 8:29.03.

Opening in a front half of 1:04.29 and closing in 1:06.12, Rebelo dipped under the 2:11 threshold for the first time in her career, overwriting her previous lifetime best and national record of 2:11.18 from this past April.

Behind her was Spaniard Africa Zamorano who touched in 2:11.48 while Turkey’s national record holder Ekaterina Avramova rounded out the top 3 in 2:12.72.

While the 2018 version of these Games saw Margherita Panziera of Italy reap gold, Zamorano and Avramova were in the same medal positions as they wound up being tonight. 4 years ago, Zamorano scored silver in 2:11.75 while Avramova took bronze in 2:13.43.

Segel would have reached to finals this in the 200 free at th Worlds.