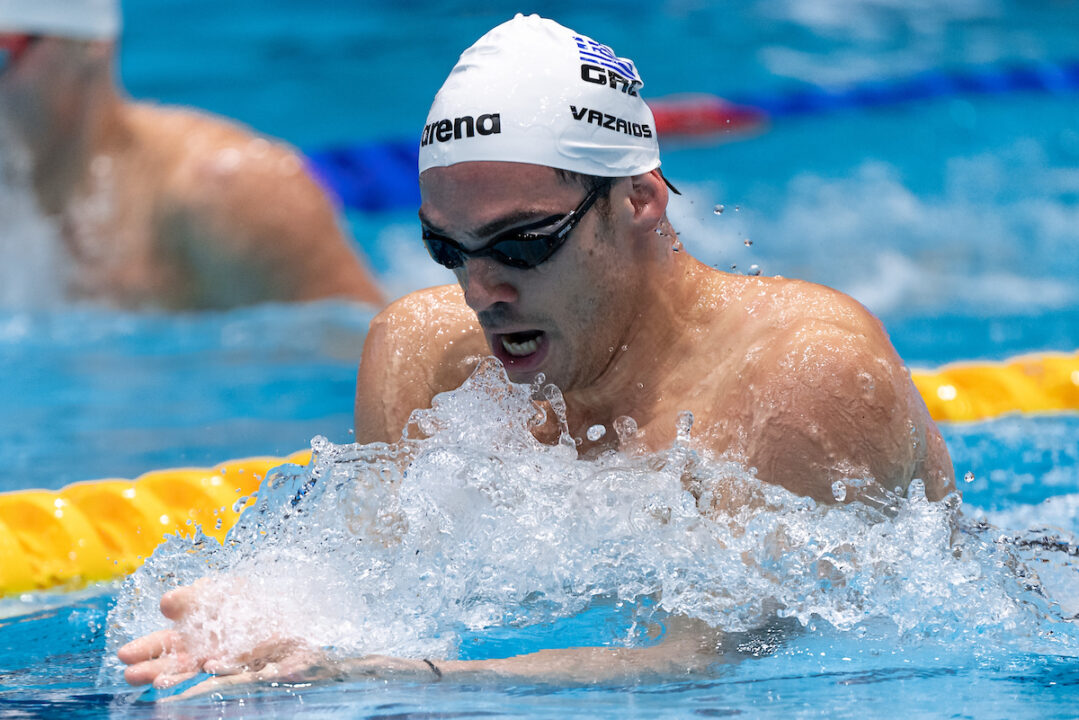 The 2018 edition of the Games saw Italy top the swimming medal table with a total of 43 pieces of hardware including 22 gold. Spain was a distant second in the medal table with 26 medals including 5 gold, while Greece rounded out the top 3 with 14 total medals and also 5 golds.

Spain kicked things off with a victory on day 1, with Lidon Muñoz grabbing the gold in the women’s 50m free. The Spaniard touched the wall just .04 ahead of Slovenia’s Neza Klancar who collected silver in 25.01, while Cypriot Kalia Antoniou punched 25.06 to round out the top 3 in the close race.

For Muñoz, she upgraded her silver from the 2018 edition of these Games to gold, while Antoniou saw a big-time improvement from her 8th place finish 4 years ago. Additionally, her time here falls just .12 outside of her 24.94 national record.

Stopping the clock in a time of 23.38, 17-year-old Ribeiro beat the previous Mediterranean Games record of 23.50 set by Serbia’s Ivan Lendjer in 2013.

Snagging silver was Italy’s Matteo Rivolta who touched in 23.59 while the gold medalist in this event from 4 years ago, Kristian Gkolomeev of Greece, settled for bronze this time around in 23.61.

Ribeiro has been making a name for himself in the fly events, reaping silver in the 100m fly at last year’s European Junior Championships. He already established new national records in both this 50m fly and 100m fly at the 2022 Danish Open this past April, producing a speedy 23.28 in the former and 52.31 in the latter.

Italy scored its first gold of these Games, courtesy of Sara Franceschi in this women’s 400m IM. The 23-year-old got to the wall in a time of 4:40.86 to just edge out runner-up Deniz Ertan of Turkey who clocked 4:40.97 for silver.

Franceschi was 2nd after the butterfly leg but surged to the lead on backstroke to keep a slight lead over 18-year-old Ertan. In fact, Ertan’s time here was within striking distance of the Turkish national record, a time of 4:39.53 the 4th place finisher here, Viktoria Gunes, put on the books in 2016.

Alba Vazquez, the 2019 World Junior champion and European Junior champion in this event from Spain, registered a time of 4:45.63 to also land on the podium with the bronze.

Only one medalist from the 2018 edition of the Mediterranean Games carried over to this year’s edition of the men’s 200m breast with Spain’s Alex Castejon repeating as bronze medalist.

Topping the podium was Turkey’s national record holder Berkay Ogretir, comfortably beating the field with a time of 2:11.26. Although that’s well off his personal best of 2:09.86 in this event, his performance was enough to beat out runner-up Frenchman Antoine Marc who scored silver in 2:12.55.

The aforementioned Castejon was rendered the 3rd place finisher in 2:12.60, well ahead of the 2:13.91 that gave him the bronze 4 years ago in this race.

This men’s 100m backstroke wound up being a close race, with the top 3 finishers separated by just .31. Taking the top prize was Greek swimmer Evangelos Makrygiannis, with the 22-year-old putting up a time of 54.35 for the victory.

Italy’s Lorenzo Mora was next in line with 54.50 while Frenchman Stanislas Huille rounded out the top 3 in 54.66.

For Makrygiannis, he represents the 2nd consecutive man from his nation to win the event, with the 2018 champion having been Apostolos Christou.

16-year-old Lana Pudar came straight from the Budapest final in this women’s 200m butterfly to the top of the podium here in Oran.

The Bosnian & Herzegovinian nailed a winning time of 2:09.18 to narrowly defeat Portuguese swimmer Ana Monteiro who was a fingernail behind in 2:09.32.

What could have potentially been another gold for Italy wound up with a disqualification on a relay exchange in this men’s 800m free relay.

Instead, it was Greece who took the top spot, with the foursome of Dimitrios Markos, Makrygiannis, Konstantinos Stamou, and Andreas Vazaios getting it done in 7:17.91.