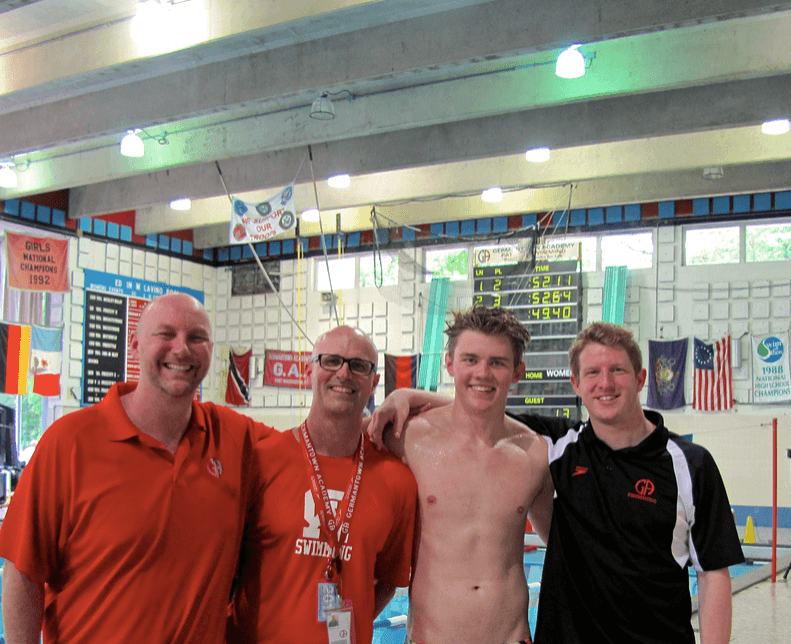 Ryan Torie has broken a legendary Germantown Academy Pool Record this weekend, swimming a 20.76 in the 50 yard freestyle to take down a 35-year old record.

The old record was set in 1980 by Bart Schneider at a 20.9, who at the time was one of the best high school sprinters in history, and still holds several records from different meets in the area (including the Mid-Atlantic LSC Senior Champs Meet Record in 20.01.

Now, under the leadership of new head coach Jeff Thompson, a relative unknown when he was brought in to controversially replace Shoulberg in 2014, the programs sprinters are once again thriving on a combination of swimmers who remain from the Shoulberg era but are now watched by the eye of Thompson.

Numbers are fun to talk about in the moment, and time standards are goals to strive for, but these kind of performances that tie an athlete and a swim back to a specific moment in history, that completes the next chapter in the narrative of the sport back to the beginning of time, that truly make athletes, fans, and writers fall in love with sports time-and-time again.

Not surprising. That’s a heck of a coaching staff.

That’s the greatest coaching staff in the country!

Congratulations to Ryan for putting his name on that iconic record board. Great swim.
It’s nice to see some positive news from a program in complete turmoil.

First of all, congratulations to Ryan.
I am a little confused, however, by the high praise for this coaching staff. I understand that Donny Brush has a very impressive resume for a high school assistant, but Jeff Thompson? What has Thompson done to garner such favorable opinions. This is a solid 50 they coached, but I’ve done some digging….Jeff Thompson was the head coach at a club in Indiana since the 90s, and their team record in the open boys’ 50 is 21.6. The same club has only had one swimmer (ever) with times under current USA-S Junior Nationals Standards. I get that he might be a likable guy, but he is still relatively unproven as a coach. A… Read more »

Hmm: Jim F’s comment is sarcasm, assuming it is the same “Jim F” who posted a comment, a hostile comment, on the same topic earlier this month on a related article.

True, Thompson may not have a background but I am sure that GA would not choose anyone less than extremely promising to replace such a legend and with the addition of Donny Brush, Thompson seems to be making serious headway to breakthrough from their current turmoil

Jason,
Lots of us wish you were right. But the head of school and the AD are delusional. They actually think Jeff Thompson is “doing great!!!”
Kids and families have fled to PWAC,PCAC,UDAC,WCAC Mermaid and found refuge in their respective summer clubs. GAAC is finished.
The program is bleeding money. Alumni are pissed. The Head of School and the AD cannot admit it but they have harmed the reputation of Germantown Academy by blowing up 45 years of work and using Thompson as the fall guy.
Happy retirement Head of School. Good job AD Fenerty. You guys have made GA swimming non existent. Mission accomplished.

The GA coaches are now pushing non FDA approved supplements on age groupers. Who is in control of the spiraling mess?

More families have left. There probably won’t be a GAAC by the end of the year. The athletic director (Fenerty) has demolished the swim program.

2017: GA is still around and is in better shape than it was the year before Jeff came.

2
-1
Reply
Someone who knows the truth
Reply to  Person

GAAC is gone forever. It was good while it lasted. Thompson looks good on paper but he has never produced a decent swimmer in 20+ years of coaching. GA is happy to pay him $130,534 a year to produce…nothing.

Is it better now? Kids transferring and Ryan Torie in huge legal trouble? I think not.

2 years later Thompson has done nothing to advance GA Swimming.

3 of best kids left Jeff Thompson’s program left because they were going backwards. After 3 months swimming elsewhere (with Shoulberg) they improved and have OT cuts and JT is retaliating. Anything is possible at GA.