Risk Your Life and Swim With the Devil 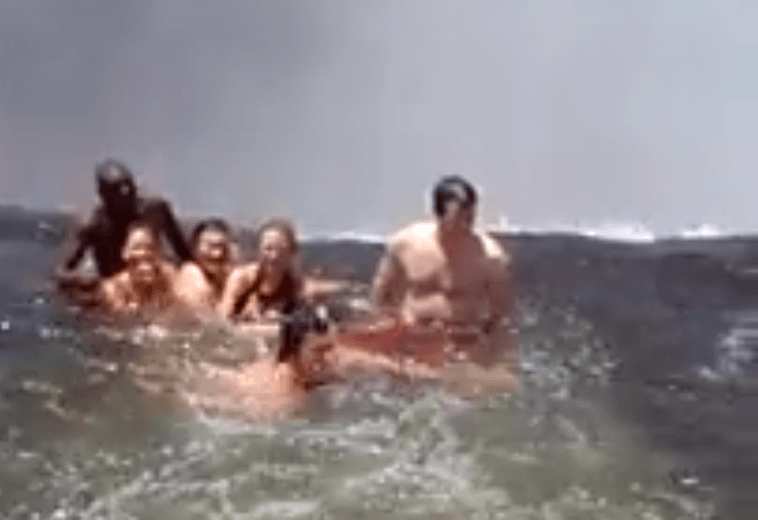 This swimming video comes via our good buddy Brian Kremers, a long distance triathlete from Southern, California.  Yes, it has millions of views on youtube, but we think it’s just getting started.

Here’s how the beind-the-scenes is broken-down on youtube: Swimming with the Devil

The closest to death I’ve ever been – Devil’s Pool at the top of Victoria Falls, Livingstone, Zambia. January 2, 2010.

The spot we’re all sitting in is called Devil’s Pool, hence the video name. To reach it, we first took a small boat to Livingstone island: a tiny island near the edge of Victoria Falls. We then swam across the top of the falls for about 20 minutes, stopping every few meters to swim directly up stream because the current would drag us closer to the edge as we tried to swim perpendicular.

The three black men (the two sitting on either side and the third holding my camera) were the guides we hired through our hotel (the Zambezi Sun) and some of the bravest souls I’ve ever met. I can’t remember exactly how much but I think it was $50 each, and well worth the investment. There were other locals who would take us for less, but inexperienced guides get tourists killed, which had happened the week. The guides knew exactly where to swim across the top of the falls, stop to rest, and swim up stream. One of them even carried one of the girls on his back when she had a panic attack while swimming across the falls. Most importantly, as you can see in the video, a guide sat on each side of the group to make sure we didn’t wander out of the safe area (well safe-ish). There’s a small underwater rock ridge which we leaned against to stop us from spilling over.

That being said, fouling around will still get you killed, as I almost learned when I tried leaning over the falls to snap a self-portrait. I felt the water rush and my legs, which were planted to the floor, swing up with the current. I quickly decided I could live without a self-portrait. The third guide, the one who took the incredible footage with my camera, actually stood on the tiny rock ridge, leaning over to capture the precipitous drop and, yes, the double rainbow. Inconceivably stunning! He could have died with the smallest slip! And these guys do this every day. They were all tipped well.

TJ from Toronto, CAN

Was I the only person that kept leaning away from the edge while watching this video?

Yes…the entire video made me nervous…

Crazy video. According to this article, “At least one person dies each year at the Devil’s Pool.”
http://www.afrik-news.com/article16222.html

I did Google Image search using the following terms… “devil’s pool victoria falls”. Some of those images make this video look tame by comparison. Crazy!