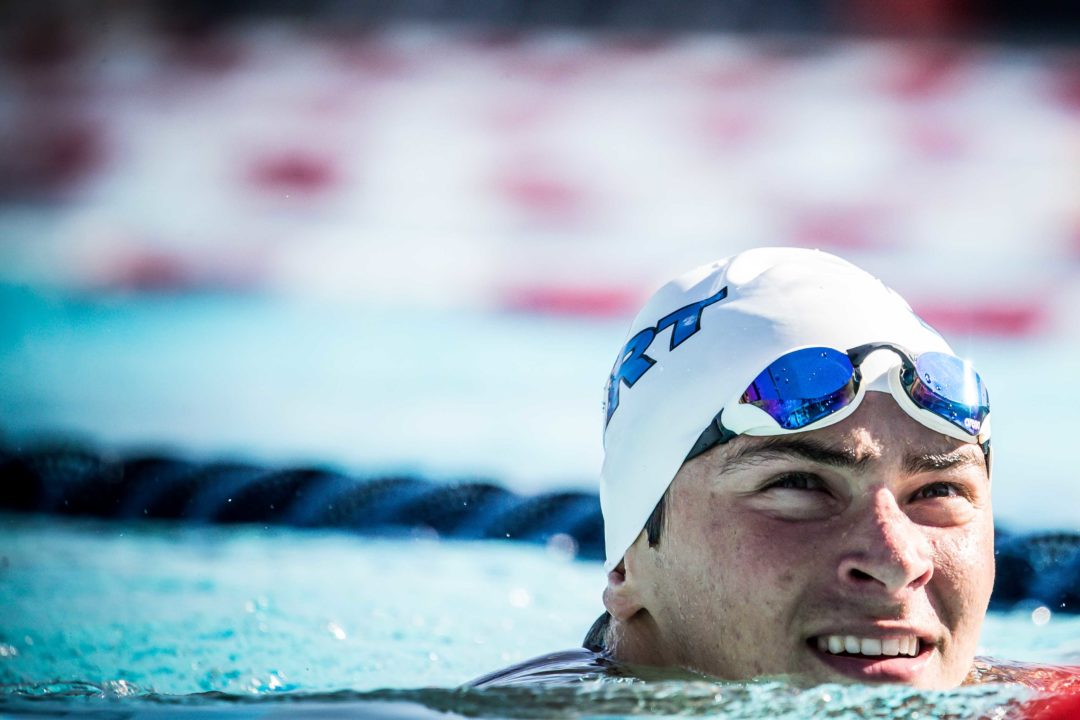 Luca Urlando is the only 18 & under swimmer on the men's side with a #1 ranking this season amongst Americans, and he has four events in the top 15, total. Archive photo via Jack Spitser/Spitser Photography

With much of the summer already over, USA Swimming has already sent swimmers out to a bevy of international meets and championships. We’re already under the one-year countdown to Tokyo, so we’re taking a look at the top 15 swimmers in every event to see where 18 & under swimmers are at. There has been plenty of speculation and analysis of who ranks where in terms of the 2019-2020 U.S. National Team, and the focus on the top six has had us all honed in on who feels like a lock for the Olympic Team next summer and which swimmers are jockeying in the top three or four contenders for more open events.

A look at the 18 and unders here gives us special insight into the younger Americans who have put themselves on the map this summer, and with younger swimmers often comes sharp improvement curves. A widely discussed topic this summer has been the two-year qualification process, much like in 2015, which really just speaks to the year-to-year turnover in talent and times. A 14-year-old sitting at 15th in an event this year could have something huge coming next year to sneak into the semifinals or even a final at the Olympic Trials, which is why we’re digging into this now to put our initial radar up for those fast movers.

This post focuses on men’s events. The women’s edition is available here.

We pulled data straight from USA Swimming to obtain the top fifteen swimmers in each event from the 2019 season, which goes from September 1, 2018, to August 13, 2019, when the data was culled. We had to filter out the non-American swimmers as well as anyone over the age of 18 to get this subset. There may be swimmers who were 18 at the time of their season-best, and they’ve since aged up. Some of the work was done manually, and there also may be errors in USA Swimming’s rankings that we have no control over. Please let us know if there is something we have missed.

Considering we are.. 4 days until Jr World.. is there any DB where we could see the top 18 and U in the world?

You can use the data hub on the USA Swimming website.

Jake Mitchell would not make the Olympic team, as he would need to get under the A cut (3:46.something) in order to make the meet.

pretty pretty pretty darn good for a high school senior. At his rate of improvement, don’t count Tokyo out yet.

Considering he swims for Carmel he will probably burnout

Lleyton Plattel now has sporting nationality with the Netherlands as well.

Andrew Abruzzo just swam a 3:48, putting him right behind Mitchell.

Encouraging to see some young blood in the mens distance free like Mitchell, Katz, and Dant. Luca and Carson are studs, should be national team staples for a long time.

I don’t see why Matt Fenlon is not on the world juniors team. He clearly is top 2 in his respective event.
Outrageous.

Fenlon did go 1:57.3 to Burn’s 1:58.5. I think thats the rub, one went faster but the other placed higher. Burns made it fair and square according the the published rules, but it is understandable why people might be frustrated since Fenlon did in fact go faster in the end.

You gotta show up at least twice at any legitimate national or international meet in order to win. If Fenlon had gone his 1:57.3 in the morning, he would have made finals and be on the team automatically.

Can’t be a sammy save-up and unload at the finals. Burns did indeed get to go fair and square. This will be more fuel for Fenlon. Good learning.

They will be in the mix with all the college swimmers and pros at the Olympic Trials.

Due to their youth, it will their first time swimming at the Meet of Tears. It’s good to know all their names because I’m sure we’ll see many of them in the finals.