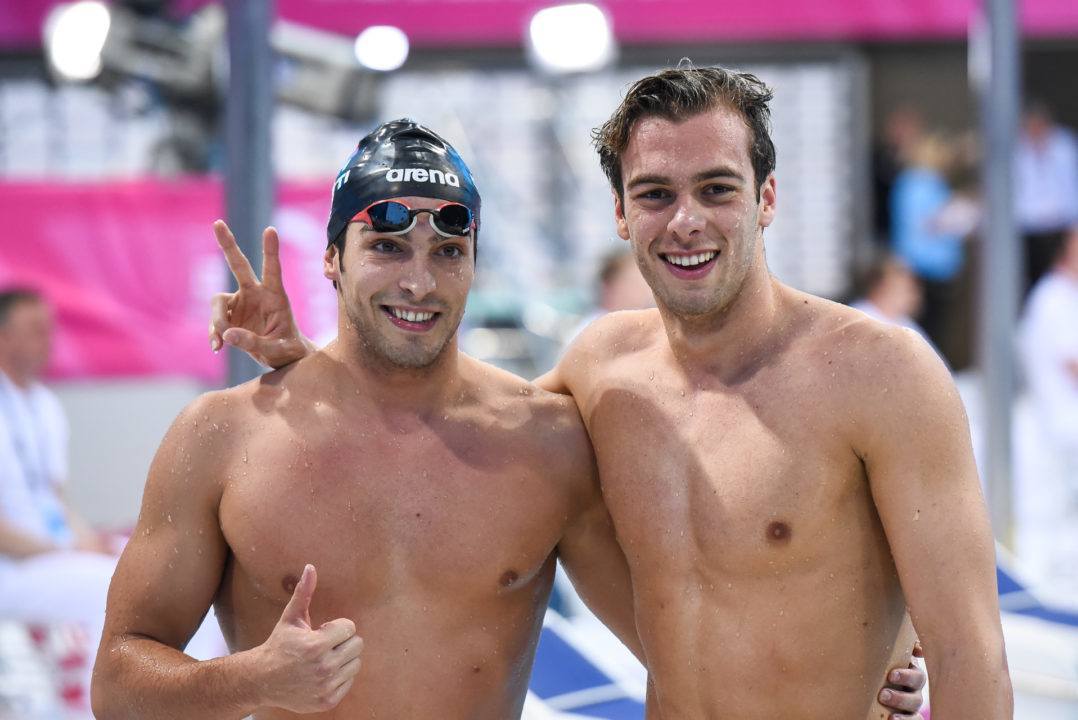 The men’s 1500 is shaping up to be one of the best battles in Rio.  In one corner, we have the defending Olympic champion and world record holder.  In the other corner, an upstart 21-year-old who has (perhaps temporarily) taken the throne as the world’s premier distance swimmer.  While who gets his hand on the wall first is in question, we’re certain about one thing: this will be the fastest 1500 field of all time.  Eight swimmers have broken 14:50 since the start of 2014, three of whom have lifetime bests under 14:40.  Overall, it will likely take somewhere in the 14:50-14:53 range to final.
To keep track of all of these guys, we’ve split the field into a few groups:

Italy hasn’t won a men’s Olympic medal since 2004, but with distance training partners Gregorio Paltrinieri and Gabrielle Detti (both 21 years old, born just one week apart) on hand, odds are they’ll break that streak in Rio.  Paltrinieri has been the best distance swimmer on the planet since the end of 2013, recording the world’s #1 short course and long course 1500 times each of the past three calendar years.  In Kazan last summer, he won gold in the 1500, and was neck-and-neck with Sun Yang through 750 meters of the 800 (Sun’s toughest challenge to date).  Behind incredible short course performances from December and his record-breaking 14:34.04 at the European Championships in May, Paltrinieri has all the momentum on his side to win in Rio.

Detti doesn’t have the same medal count as Paltrinieri, but has recorded top ten 1500 times each of the past three seasons, as well, headlined by breakthrough 14:46.48 at Italian Nationals that makes him the third-fastest swimmer in 2016.  Two months later, he won three medals, including gold in the 400, at the European Championships.

The key hurdle in Paltrinieri’s is a big one: world record holder Sun Yang.  Although he hasn’t lost a major international race of 400 meters or longer since 2011, Sun hasn’t been close to his personal bests from the 2011 World Championships and the 2012 Olympics.  Injuries (he’s been battling a foot injury since January) and incidents could definitely have played a role; the defending Olympic gold medalist has frequented the tabloids, including a positive drug test, a fall-out with long-time coach Zhu Zhigen, an incident in the Kazan warm-up pool, and legal issues stemming from a 2013 car crash.  However, after an impressive showing in Santa Clara at an Arena Pro Swim Series event where he posted the world’s top 200 time and #2 400 time, it’s clear Sun has plenty in the tank to defend his title.

Three North American swimmers will be in the hunt: Canadian Ryan Cochrane, and Americans Connor Jaeger and Jordan Wilimovsky.  Cochrane brings more international experience (2006 Pan Pacs vs. 2012 Olympics for Jaeger vs. 2015 for Wilimovsky), more hardware (24 medals at major international meets vs. 5 for Jaeger, vs. 1 for Wilimovsky), and a faster personal best (14:39.63 vs. 14:41.20 vs. 14:49.19) to the table, but Jaeger has had the upper hand the past two years.  In 2014, Jaeger came up golden in the 1500 at Pan Pacs, and bettered his Canadian counterpart again last summer at Worlds in both the 800 and 1500.

In addition, Jaeger carries maybe the strongest momentum coming into this meet outside of Detti and Paltrinieri.  He was perhaps the top-performing American male across the board last summer in Kazan, where he posted an American-record-smashing 14:41.20 to earn silver in the 1500.  He was just 14:47.61 in Omaha last month, but after securing an Olympic birth the opening night in the 400 with a lifetime-best 3:43.79, it’s possible he amped up the training a bit more in practice, rather than spending eight days in “race day” mode less than two months before Rio.

Meanwhile, Cochrane’s times have slipped since he became the first swimmer from the Americas to crack the 14:40 barrier at the 2012 Olympics:

Given him qualifying out of Canadian Olympic Trials was all but a “sure thing”, his 15:00 isn’t particularly alarming (he was just 15:09 at 2012 Canadian Trials, for comparison).  However, with a stronger set of medal challengers this time around, he will need to get back towards the 14:40 mark to contend.

Wilimovsky will be in the mix, as well, after his 14:49.19 at U.S. Olympic Trials.  Although this is his first big-time international experience in a pool event, Wilimovsky is the defending world champion in the 10K open water.  What remains to be seen, however, is whether or not his open water preparations impede his 1500; the 10K is less than 72 hours after the 1500 final in the pool.

Like Italy, Australia also possesses an impressive young distance duo that appears to be hitting their stride at the right time. 21-year-old Mack Horton and 20-year-old Jack McLoughlin each crushed their personal bests at Australian Trials, with Horton dropping five seconds to clock a then-world-best 14:39.54, and McLoughlin cutting 25 seconds to earn the second spot in 14:48.60.  Horton has been considered the future of Australian distance freestyle since he swept the 200, 400, 800, and 1500 at the 2013 World Junior Championships, and while his showing in Kazan was sub-par, he’s clearly rebounded with a front-half of 2016.

I have no problem with either Paltrinieri or Sun winning. But Horton truly disgusted me with his deception. That “red boat” strategy of his, oh gosh… I don’t like snakes.

What a competive race this will be. Arguably, 5 guys worthy of a medal (Yang, Paltrinieri, Horton, Jaeger, Cochrane). As has been indicated above, 14:40 is potentially not enough to get on the podium (unless 1 or 2 guys are sick or don’t “have it” on race day).

Watch out for Norway’s Henrik Christiansen.

This is going to be an interesting race tho – like some others – I hope Sun doesn’t medal.

Would like to think
Horton in a startling WR
Paltrineri also breaking WR
Deti
With young McLoughlin again improving his time to finish just outside the medals.
Yang, the “former drug cheat” to miss the podium.
But reality
Paltrineri
With the silver a contest between Yang and Horton.

Paltrinieri is like the male version of 1988 Janet Evans (minus the bobbing head and the straight arm recovery). Not pretty in the water like Sun Yang and to me, he’s more like an Italian mountain climber that fell off his bike, somehow ended up in the pool and is now spinning up and down the pool using his arms instead of his legs.

Sun Yang will show you all.

Say NO to Cheater!