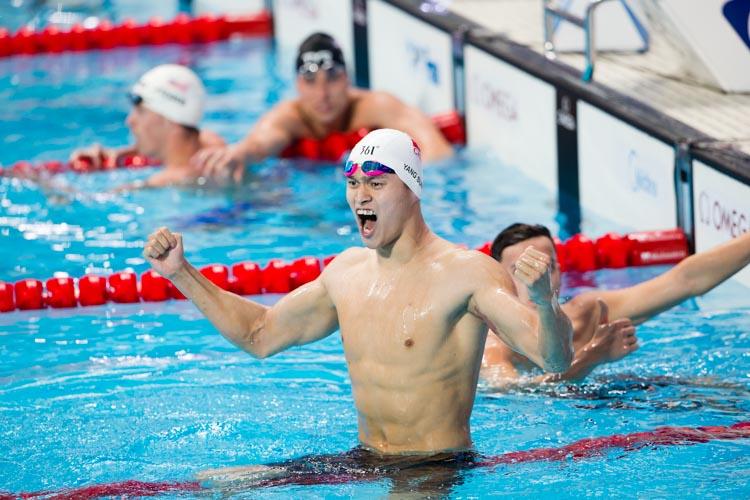 Sun Yang was involved in a physical altercation with a Brazilian female swimmer in the warmup pool prior to the finals session. Current photo via Tim Binning/TheSwimPictures.com

China’s Sun Yang was absent from the final of the men’s 1500 freestyle, leaving a big hole in the middle of the pool in Sunday’s event final.

While we have been unable to contact anyone in Sun’s camp to confirm the nature of his withdrawal, we have confirmed with Brazilian sources that Sun Yang was involved in a physical altercation with a Brazilian female swimmer in the warmup pool. The Brazilian team reported Sun to FINA.

Additionally, Sun was seen by several other swimmers from other federations that we’ve spoken to exchanging heated words with a Brazilian coach after the incident.

Sun was seen in the warmup pool before the finals sessions. Updates below include the official reasons being given by FINA for the withdrawal.
Update: The BBC is reporting that the Chinese Federation has given a “heart problem during warmups” as the official reason for Sun’s withdrawal from the 1500 free final. Nicole Jeffery from The Australian says that a FINA official has said the same thing, and that there “wasn’t time for a full medical checkup,” so he withdrew. FINA says that they will hold a press conference regarding Sun’s withdrawal after the session.
Update #2: The Brazilian team’s head coach Albertinho has confirmed the altercation in an interview for Brazilian television, according to Brazilian outlet Yes Swim. He says that the Chinese coaches came to apologize afterward, and that he doesn’t believe it was the reason for Sun’s withdrawal from the final. The altercation happened during the preliminary session, but was not with a swimmer who participated in the day’s events. Instead, it was a swimmer who was preparing for next week’s Brazilian National Championships and had completed competition earlier in the week.
Note: the original last sentence of this story says that we were unable to ascertain information that this was the reason for Sun’s withdrawal from the 1500 final. Brazil, China, and FINA have now all said that it was unrelated.

So the hospital thing was a lie?

Maybe she beat him up so bad he needed a hospital

Maybe. Flippers could be weapons.

Maybe. No flippers, rings, etc. are allowed in the pool. They are dangerous.

what this ????? well that happens but i guess not often

Some tweets suggest he hit a female swimmer ‘full fist’ and was disqualified. Cannot confirm if this is true of course!

So the unnamed Brazilian source is twitter? Is that the only source?

think about it pls.he is the world record keeper of the men’s 1500 freestyle, and next will be the finalwill he be that stupid?!

use your head, and you will figure how ridiculous it sounds.