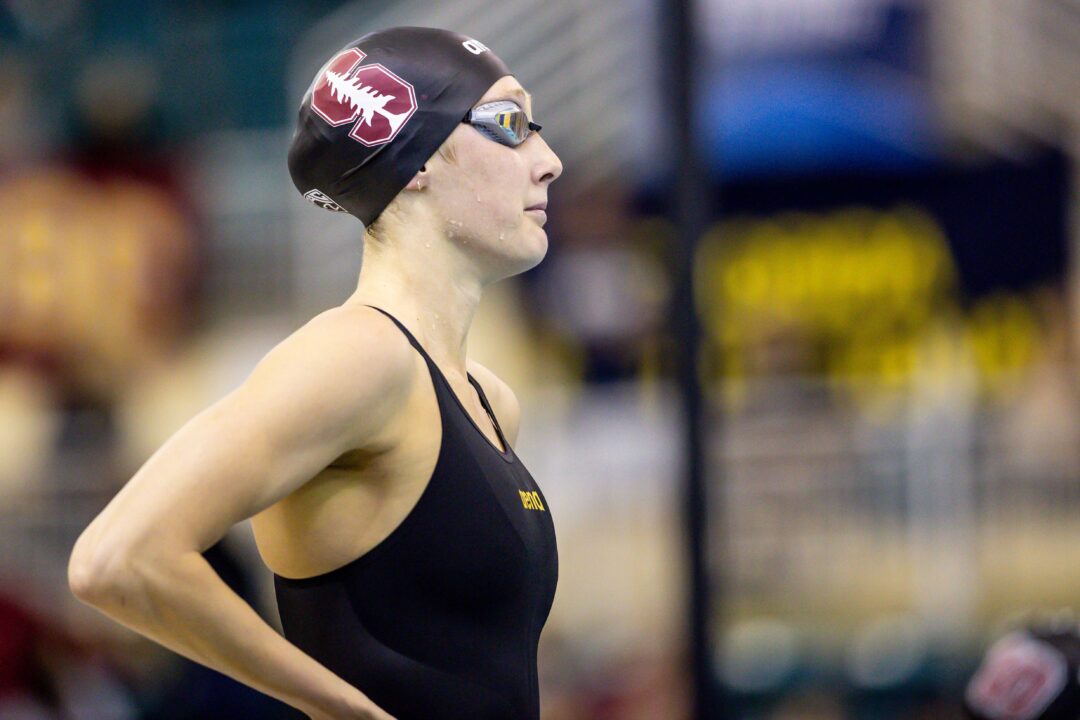 Despite only swimming in two NCAA meets, Taylor Ruck scored the most points out of our top-20 recruits from the high school class of 2018. Archive photo via Jack Spitser/Spitser Photography

As we do each year, we’ll look back at the high school class of 2018, which just finished four years of college eligibility this spring.

2022 Note: Due to swimmers being granted an extra year of eligibility after the 2020 NCAA cancelation, some of these athletes may still have years of scoring still to come.

Check out this post for our analysis of the top 20 recruits in the high school class of 2018. This class was actually the first in which we did a re-rank for the swimmers when they were high school seniors (previously the final rankings were done during their juniors years). Since the re-rank gives us the best gauge of where the athletes were coming into the NCAA, and therefore we get a better idea of who improved the most during their time in college, we’re using the re-ranked top-20 rather than the original rankings from their junior seasons.

Note: we’ve made an effort to put a dash (–) in a season in which an athlete didn’t compete (or was cut short due to injury) rather than “no invite”. If you see an error please let us know in the comments.

Due to various circumstances, this class was full of early retirements, redshirts and transfers. As a result, only four of the top-20 scored in all three NCAA Championships over their four-year career, with six total swimmers qualifying for all three.

#7 Eva Merrell, who was ranked #1 in the class rankings during their junior year of high school, didn’t end up suiting up for Georgia and never competed in the NCAA.

OTHER IMPACTFUL RECRUITS IN THE HIGH SCHOOL CLASS OF 2018

Of course, not every contributor comes from our top 20 list. Some swimmers develop extremely well in college. Some swimmers slip under our radar, or don’t prove to be late bloomers once they hit the NCAA.

We dug through NCAA results to find the best American swimmers from this class to not appear on our top 20 list. Again, it’s not always easy to account for redshirt years, gap years or mistakes in an athlete’s listed class each season. So if we forgot anyone, please let us know in the comments.

Note: Though Taylor Ruck is Canadian, she came up through the U.S. club system and that’s why she’s in the top-20 rankings and not international.

ALL INDIVIDUAL SCORERS IN THE CLASS

We usually like to run through the top seniors who don’t technically fit with this class. The main one this season was Cal’s Izzy Ivey, who joined the Cal Bears a semester early and therefore swam the same NCAA meets as everyone in the high class of 2018. Ivey scored 120 points in her three NCAA appearances, which would’ve ranked second to Maggie MacNeil if she was factored into this class.

“Kentucky reaped the rewards of this class” doesn’t really reflect how well Lars and staff develops talent. Riley, Izzy and Sophie are top notch swimmers that got better at Kentucky like Asia, Tina Bechtel and the Gayler sisters, plus many more. Every year the Wildcats get overshadowed by teams with more outstanding recruiting classes. It would be great to see how UK rates in the past 5-6 years recruiting versus performance compared to others. My guess, they are consistently producing above expectations. More top talented recruits need to consider Kentucky to help them continue to improve.

When will HS recruit rankings come out?

It is not entirely fair to not consider the relay impact since that is included in the initial rankings of swimmers.

Makes you wonder how important it is to get the top recruits. 6 of the top 10 non diver point scorers weren’t ranked recruits coming out of high school.

This class was a little different but looking back the previous 4 classes before it, having a recruit in the top 10 was a good chance that they were going to be a consistent contributor, but the ranks 10-20 were very hit or miss.

If Taylor Ruck doesn’t doesn’t count as an international swimmer because she swam in the US, how come Ema Rajic does? She won both the 200 IM and 100 Breaststroke at the IHSA state championship her junior and senior years of high school.

Ruck was ranked in the top 20 back in 2018. If she wasn’t, she would slot in the international section now. It’s possible Rajic was considered for the top 20 back then, but I’m not sure.

I’m confused! Taylor Ruck is a Red Shirt Junior, did she graduate Stanford in 2022or will she be back and swimming in 2023? How many of those mentioned will be back next year? MacNeil is going to Cal for a masters next year, how many listed above will still be swimming and providing valuable points for their teams?

She’ll likely be back. Due to the allowance of five years of eligibility (and redshirts), all of these swimmers will have the option of coming back. But we’re simply looking at the HS Class of 2018 and how they fared over the four-year span that would normally be the end of their collegiate career.