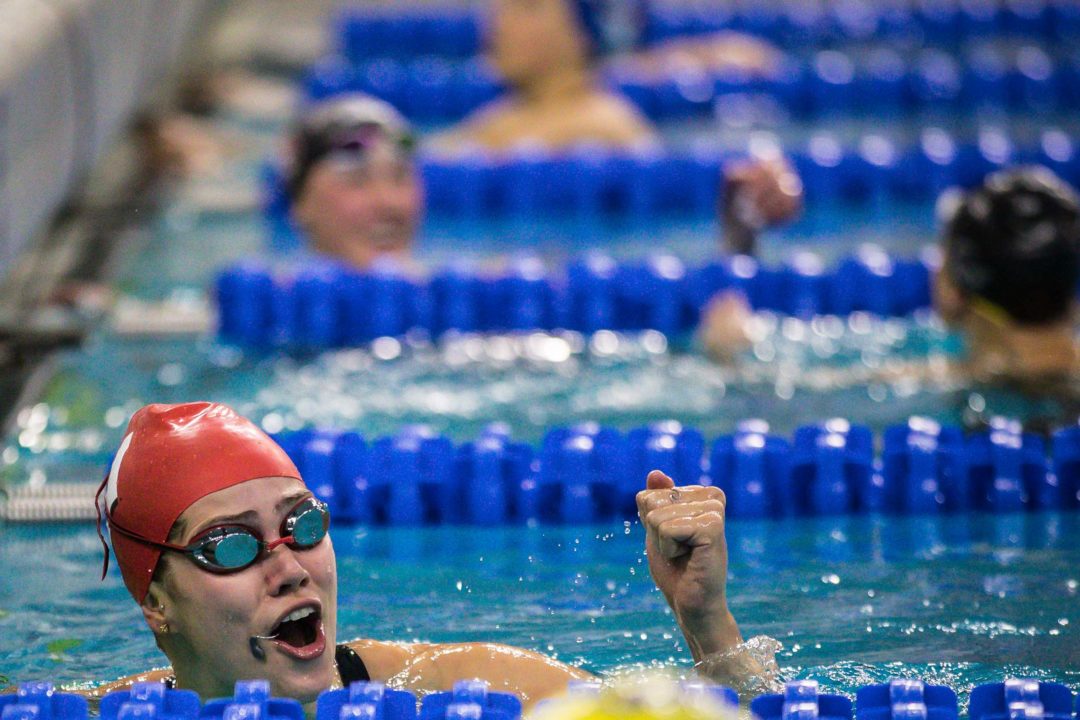 Way back in 2015, we ranked Beata Nelson as the #2 recruit in her class. She'll actually finish #3 in NCAA scoring - but could she have caught #1 in 2020? Archive photo via Jack Spitser/Spitser Photography

A handful of highly-ranked recruits from previous classes took redshirt or gap years:

Weitzeil was projected to score a meet-high 56 individual points on psych sheets this year. This 2015 group was a loaded high school class, arguably the best in history. Weitzeil ranked #10 in scoring in that class with just three seasons (she deferred her freshman enrollment), and adding 56 to her total would bring her to 162, ranking #5 overall while passing two other stars who only swam three or fewer NCAA meets: Katie Ledecky and Kathleen Baker.

(For what it’s worth, Ella Eastin led all scorers in this class with 228 points, but Weitzeil would project to finish just 10 behind Sydney Pickrem for 2nd place).

Moroney took one injury-related redshirt season, but still ranked #18 in total individual scoring. She was projected to score 3 points this year, but it’s fair to suspect she would have moved up from there after scoring in double digits in each of her three NCAA meets.

Tucker was the #2 scorer in the class who was not ranked in the top 20 out of high school. An intra-conference transfer from Indiana to Michigan cost her a year, but Tucker still scored 77 points over three years. She was projected to score 18 more this year, and would have moved into a tie for #11 in the class.

Runge scored 49 as a freshman for Cal, but then took a gap year to focus on the Olympics. She missed scoring individually at NCAAs as a sophomore with Wisconsin, then transferred yet again, sitting out a year before swimming two more seasons with Arizona State. Runge scored 32 points in 2019 and was projected to score 21 this year – that would put her at 102 individual points – #4 overall in her class behind only Simone Manuel (169), Bethany Galat (137), and Janet Hu (112).

Keaton Blovad wasn’t a superstar, but she was incredibly consistent for Cal. Dropped time every year and she was a perfect 12/12 in PAC-12 A final appearances. Even more accomplished swimmers such as Drabot, McLaughlin, and Howe were unable to achieve such a feat. Blovad scored in all 3 of her NCAA events last year (in the B final) after not scoring her first 2 years. I was hoping to see her make an A final this year at NCs. Sigh.

Dressel was having a GREAT season, it’s a real shame it ended early.

Kentucky did the best coaching according to this info – Lars Jorgenson for NCAA COACH of the YEAR.

Too bad the mens team is still at the bottom of the SEC.

Thank you for posting these type of stats. Nice break from the madness

Does this mean the high school re-ranks are in the works! <3

They’re definitely on our list for the near future! We’re trying to give those as long as we can, because there are a few states still that haven’t cancelled their swimming championships yet. We may wind up running them before we have a full answer on that, but we’re at least trying to give them as much time as possible to make a decision.

Other than California whose HS state championships typically fall after your rankings release (and lead to many comments annually), could you share which states canceled their HS meets and which are still pending? Looked like IN, IL, and OH just got them in and PA got them mostly in, though Brownstead was denied a finals opportunity to go after David Nolan.