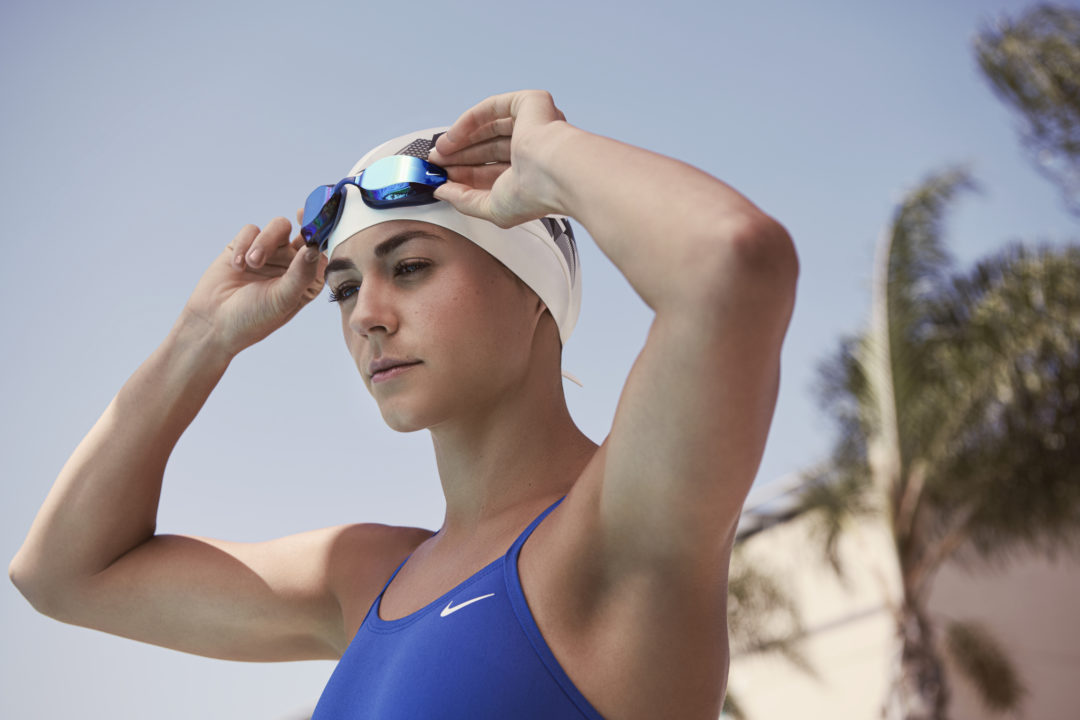 Looking for a sleek, comfortable racing-quality goggle that won’t break the bank? Nike Swim now has you covered.

This month, the company — which was briefly in the tech suit market but has since discontinued its line — is launching the Nike Vapor, a new FINA-approved performance goggle. Lead designer Erika Gentry drew on her own experience as a competitive swimmer in innovating the new line, and it shows.

The Nike Vapor in “Light Smoke.”

Swimswam was invited (at Nike’s expense) to test the new line at the Company’s Beaverton, Oregon HQ last month, and fully expected to be underwhelmed. I’ve worn the same goggles my entire career and wasn’t looking for anything new. But after the first unboxing, I was already intrigued: they look sleek.

The goggles feature a curved lens, keeping with the trend of racing goggles over the past four years or so. The lens comes in 12 different tints, suitable to every training or racing environment.

To me, it’s a small detail that stands out about these goggles: the nose piece. Snapping a nose bridge peg is maybe the worst thing that can go wrong with swim gear outside of ripping a tech suit — it’s impossible to fix, unlike when you break a goggle strap and can tie it, or replace it with a bungee.

A closer look at the Swift Track nose piece.

The Vapor solves this issue: Gentry innovated the goggle’s Swift Track nose bridge, which slides in and out of place rather than snaps. The photo to the right shows the nose bridge sliding out (note that it does require some force to do, so the pieces wouldn’t randomly come apart).

One other common inconvenience the Vapor solves? Old rubber gaskets causing leaks. The Vapor is manufactured in an  “over-mold” style, meaning the gasket is molded over the lens, as opposed to being two separate pieces.

The goggles also feature a curved back clip that conforms to head shape, though admittedly, as someone with long hair, I’ve never had an issue with discomfort from a back clip. The clip holds securely onto the silky smooth traps, which are slightly wider than then you typically see, and feel very secure.

In the water, the Vapor’s curved edge allowed for wide peripheral vision.

I wondered, however, why Nike would make a racing goggle without making a tech suit to go along with it. Nike’s response is that the Vapor is for everyone: not just elite athletes. Think club, high school and masters-level swimming. As to future endeavors, elite-level tech suits are not in the plan at the moment, and as a brand, Nike Swim is refocusing efforts to a broader audience.

The goggles go on sale Nov. 15, and retail for $35 for the mirrored version and $30 for non-mirrored pairs.

As soon as Nike brings back a swim program at the University of Oregon, I would glad buy their swim products.

They would have to refine the microdosing . However the goggles look nice .

I tried these goggles. They aren’t worth it…

They go on sale on the 15th . You must be IMPORTANT to get an advance pair . . Congratulations!

Why would I buy a pair of goggles that look just like Speedos and are arguably inferior to Arena’s Cobra ultra?

Cobra Ultra are double the price.