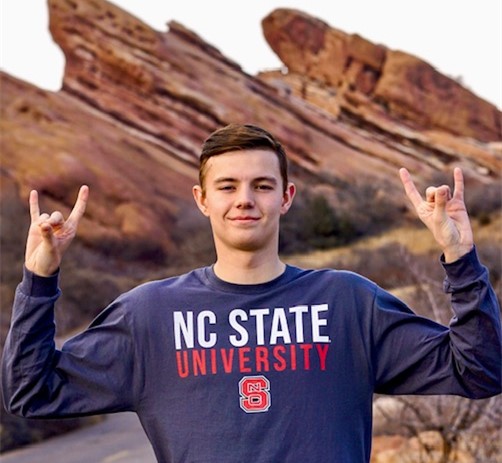 NC State commit Chase Mueller triumphed in the 200 IM with an Automatic All-American time of 1:48.88 at Saturday's 5A CHSAA Championships.

Regis Jesuit secured its first state championship since 2018 – and 23rd all-time – to cap off Saturday’s 5A CHSAA Swim and Dive Championships at the Veterans’ Memorial Aquatic Center in Thornton, Colorado.

The top-seeded Raiders had already clinched a victory by the time they won their first race of the day with a 3:04.11 in the meet-closing 400-yard freestyle relay. Senior standout Gio Aguirre didn’t defend his individual title in the 100 free, but the Navy commit did anchor the championship-winning relay with a 44.84 split to cap off his high school career. Regis Jesuit senior Mack Dugan (46.76) and juniors Ronan Krauss (46.06) and Hawkins Wendt (46.45) joined Aguirre on the relay team. Aguirre and Krauss also finished runner-up in the 100 free (46.10) and 500 free (4:38.74), respectively, marking the highest individual placements for the Raiders. Head coach Nick Frasersmith took home 5A Coach of the Year honors.

The meet featured impressive individual performances by Jack Ballard of Fort Collins, Chase Mueller of Columbine, and Tristen Davin of Chatfield, who tallied top finishes in two individual events apiece. Ballard, a Minnesota commit, won the 200 free (1:39.99) and 500 free (4:37.91) to earn the 5A Swimmer of the Year award. Ballard’s 200 free time was slightly over a second slower than his personal best while his 500 free time was four seconds off his fastest.

Mueller first triumphed in the 200 IM with an Automatic All-American time of 1:48.88, about a second off his personal best set at the Winter Junior Championship West meet in December. The junior NC State commit also repeated as state champion in the 100 back, holding off Cherry Creek senior Cade Martin by .42 seconds. His future Wolfpack teammate, Quintin McCarty, set two state records in the same pool during Friday’s 4A meet.

Davin prevailed in the 50 free with a 20.57, sprinting just .03 seconds ahead of Legacy senior Kyle Raskay. Soon after, the Virginia commit prevented Aguirre from repeating as the 100 free champion by clocking a 44.94.

Defending champion Cherry Creek got off to a hot start when senior Conrad Eck won the diving title, helping to give the Bruins an early 69 points along with three other top-12 finishers. They kept it going in the first swimming event of the day as quartet of Martin, Carson Morris, Liam Bekerman, and Jason Fan claimed first place in the 200 medley relay, but that was the last event they won. Cherry Creek ended up placing second with 403 points.

Third-place Legacy earned a victory in the 200 free relay thanks to the team of Raskay (20.78), senior Aidan Shepston (21.18), and juniors Sam White (20.95) and Tegan Barrier (20.51), which snuck past Regis Jesuit’s quartet by .35 seconds. Fourth-place Fossil Ridge was led by junior Carter Ruthven, who won the 100 fly in 48.82. His time was less than a tenth of a second from his personal best in the event. Fifth-place Heritage also had an individual winner in junior Mitchell Oliver, who took the 100 breast title in 55.76. The University of Denver commit was .22 seconds from his personal best.

No state or 5A state records were set at the 5A meet.

NC State’s backstroke group won’t have a let up with Mueller and Ksawery Masiuk coming in in the ‘23 class!!!