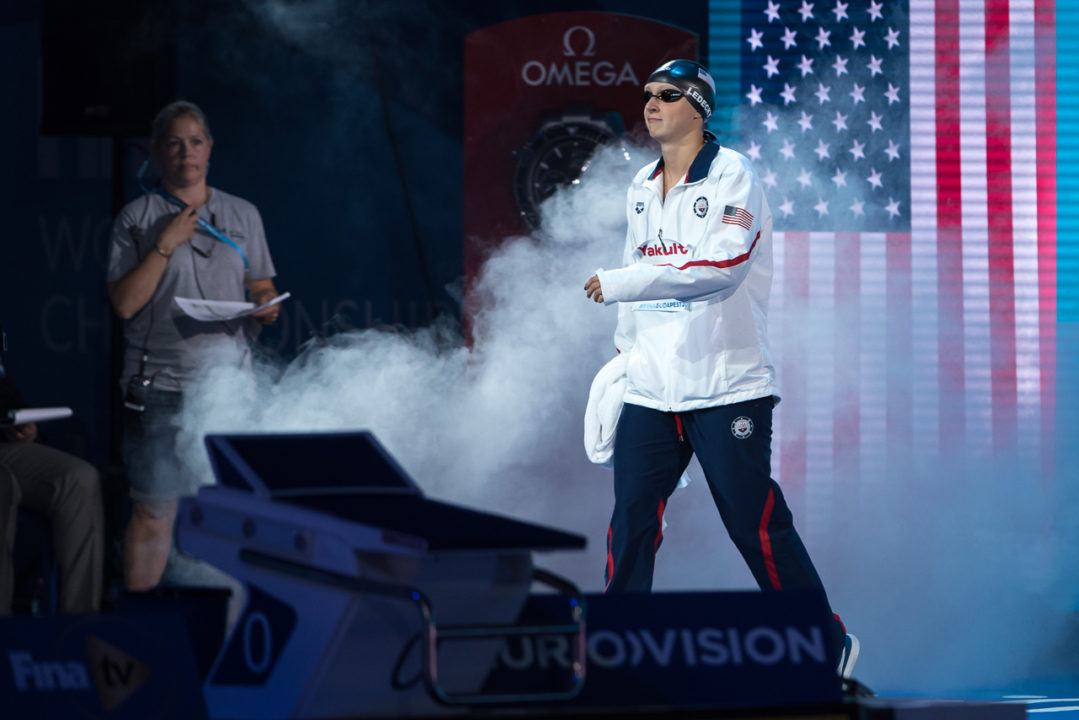 Katie Ledecky swam back-to-back freestyle events on Tuesday night in Budapest. After winning the 1500 with the fourth-fastest time in history, she came back and led the field in the first 200 free semi-final. Watch the races here. Current photo via Peter Sukenik/www.petersukenik.com

At 5:40 p.m. at the Danube Arena in Budapest, American Katie Ledecky stepped up to the block to swim in the final of the women’s 1500m freestyle. An hour later, after having averaged 31-lows on her 50s for 15 and a half minutes, Ledecky was back at it in the first semi-final of the women’s 200m freestyle. And despite having just finished the fourth-fastest 1500 free in history, Ledecky still led the field in the 200. She won her heat with the top overall time of the night, and will dispute the final on Wednesday from lane 4.

Watch the races below courtesy of NBC Sports.

As a surprise to no one, American Katie Ledecky scorched the women’s 1500m freestyle field, taking gold in a time of 15:31.82, the 4th fastest performance of all time. This is Ledecky’s 3rd consecutive world title in the event, having won in both Barcelona and Kazan. Ledecky has already wrangled in gold in the women’s 4×100 freestyle relay, as well as a gold in the 400m free, so the Stanford swimmer is well on her way to a record-setting haul here in Budapest.

This win marked Ledecky’s 12th world championship victory, the most of any female, only sitting behind Michael Phelps (26 medals) and Ryan Lochte (18). And Ledecky isn’t even done for this session, taking on the first semi-final of the 200m freestyle coming up in less than an hour.

Finishing 19 seconds later was Spaniard Mireia Belmonte, the 200m fly Olympic champion. Belmonte wasn’t able to compete at the 2015 World championships in Kazan due to a shoulder injury, so this race was a redemption of sorts for the national record holder. 15:50.89 was the time Belmonte clocked tonight, clearing a new Spanish record and checking in among the world’s top 10 performers of all-time in the race.

The women’s 200m freestyle semi-finals was a tale of 2 races, as the first 8 women fired off quick swims, while the 2nd heat was a little on the sluggish side. All told, just two women were under the 1:55 mark, led by American Katie Ledecky, less than an hour after her gold medal-winning 1500m freestyle. Her time of 1:54.69 is the 5th-fastest performance by an American.

On-fire Australian Emma McKeon is going after her 3rd medal here in Budapest, having already won silver on the 4x100m free and silver in the 100m fly. McKeon’s time tonight of 1:54.99 is her 2nd best ever and sets the Brisbane-swimmer up nicely to challenge for the gold.

Russia’s Veronika Popova was also in that first heat, clocking 1:55.08, hacking .85 off of her previous personal best of 1:55.93 to check-in with a new national record.

Another national record fell by way of 6th seeded Siobhan Haughey of Hong Kong. Her time from this morning of 1:56.62 was Hong Kong’s best-ever time from a female, but the Michigan Wolverine-trained athlete lowered that time even further, taking it to 1:56.21 tonight.

Rio was Katie’s peak. I doubt she’ll ever best those times in the 400, 800 or 1500. I was so thrilled for her that she met her lofty Rio goals. I doubt she realized it would likely be her only chance to match those numbers.

Bob Costas was blabbing all the conventional wisdom garbage during the Rio night time coverage, that Ledecky is only 19 and not in her prime. Nice try. She has plenty of margin for error so the gold medals are going to follow, certainly in 2020. By 2024 it’s considerably more uncertain. An inspired 10 year old from 2016 can be defeating you 8 years later.

BTW, I realize there was no 1500 in Rio. I should have separated that distance instead of lumping it into an early sentence with the others.

The bottom line of what you just said is that, yes, everybody’s sport career has peak and then eventually comes to the end. It’s hard to argue with such wise statement. The real question of interests however is how to determine if such peak has already happened or is still ahead. You think that it was the year of 2016. What makes you think so? Absence of new personal bests this season? That’s it?
Her personal bests stay so far away from her other results that nobody in clear mind can suggest that it is done by the same person.
At 100: 52.6 split when her other results suggest 53.high – 54 low swimmer
At 200: 1:53.7,… Read more »

It is hard to be Ledecky fan. At Olympic Trials it was terrible of her. Nothing like what was expect after great results in season. And then the spectacular performance at Olympic Games followed.
She started this meet like she hasn’t tapered at all after Nationals. Her times at 400 and in relay were just slightly better. This even started talks of possible upset at 200 because of tough double she had and great shape of McKeon and Co. And today I started believe in her another 1:53 and possibility of beating Allison Schmitt’s record.

You are just jealous of the person’s who is capable of all variety of human feelings. 🙂
I used to have neighbors who’s child’s face had no other expression than unreasonable smiling. And each time when I saw him I was sorry for his parents.

Please fill in the blank, so to speak.

I was starting to have my doubts about Greg Meehan. However, the race strategy worked to perfection for the last two days:

US and World Lists, All Time Top Performances

I think it’s worth noting she is still faster than her own 2013 World Record, and the next one she set in 2014 before dropping under the 15:30 point later that same year. And honestly, it is also worth realizing that she might never break her 15:25 record and it stands to reason it might be 20 years until someone comes along who can.

I guess when it comes to Ledecky, we’ve been amazed so many times that amazing performances sometimes stop amazing us!

You can draw your own conclusions.

Certainly not knocking her in any way. It takes a unique talent to know how to race both a 200 and a 1500, two distances that have almost nothing in common other than taking place in a pool and swimming freestyle. And to be swimming the times she does as that….simply impressive.

Ledecky navigated the toughest part of her schedule far better in calendar year 2017 than calendar year 2015. I predict that Ledecky guns for the American record (1:53.61) in the women’s 200 m freestyle tomorrow.

I am starting to have my doubts about Greg Meehan. Not that he cares a whit what some random internet person thinks. However Katie’s times have been dominant but a trifle off so far here at Worlds. At NCAAs she had a brilliant 500, but was slower than Conference in the 200 and 1650. So what is going on? Perhaps overtraining, the bane of collegiate swimming? Hard training combined with long hours studying along with less regular sleep? Hard to say for sure.