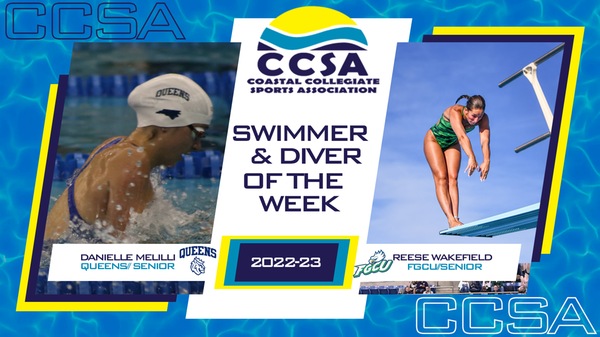 CCSA Swimmer of the Week

Vs Georgia Tech and West Florida

Queens men’s and women’s swimming concluded the regular-season portion of their swimming schedule with a road trip to take on Georgia Tech and West Florida. The men’s side fell short to Georgia Tech, 149-112, while the women’s side managed a 190-104 victory over West Florida and a 191-103 loss to Georgia Tech. Danielle Melilli shined bright in the Peach State, competing in four events and claiming the top spot in all four. She began the afternoon swimming the final leg of the 200 yard medley relay in 22.07 and helping Queens begin the day with a victory. In her first individual event, she dashed to the top spot in the 50 yard free at 22.53. Shortly after in the 100 yard free, she took first yet again, coming in at 49.50. She concluded her day swimming the initial leg of the 200 yard free relay, touching the wall in 22.68 and helping her squad to yet another first-place finish.

CCSA Diver of the Week

Last week against Florida International, Reese posted her season best scores on both the 3m and 1m, placing second in both, behind NCAA Qualifier and Olympian Maha Gouda from FIU.  Reese’s score on 1m qualified her for the upcoming Zone Championships, improving her season best score by over 20 points.  Her 3m score was also a season best, by nearly 20 points.