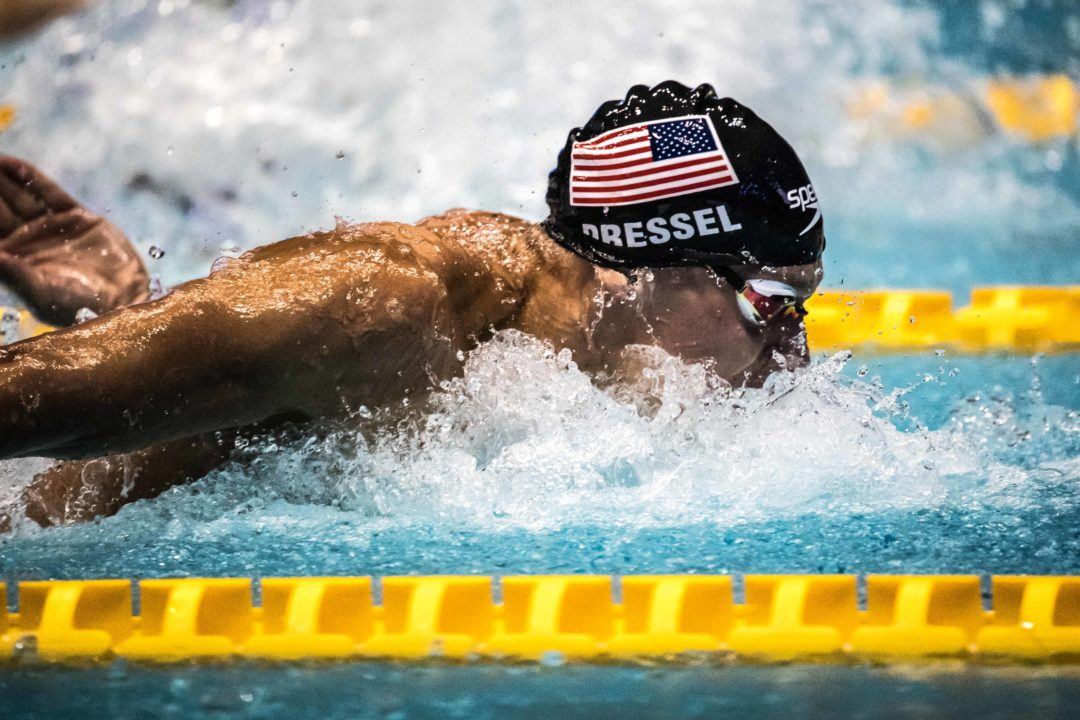 With the release of the 2020 Tokyo Olympic swimming schedule earlier today, it’s time to take an early look at some of the potential doubles and wrinkles of the new format.

You can view the new schedule here. The lineup was changed to include the three new Olympic events: the women’s 1500 free, men’s 800 free and a mixed-gender 4×100 medley relay. Those three events are slotted in, and the men’s 50 free was pushed back one day to accomodate the change.

Here’s a look at some potential doubles and wrinkles with each lineup change:

The 1500 looks to have the biggest conflicts associated with it – and perhaps one for the top medal-winner of the 2016 Olympics: Katie Ledecky.

The women’s 1500 slots into heats on day 3, which was originally the lightest event session. It previously only featured the women’s 200 free, men’s 200 fly and women’s 200 IM. But the 200 free/1500 free could be a problem for rangy athletes like Ledecky, who is expected to swim both.

Those 200 flys could cause an issue for Mireia Belmonte, who was the 2017 Worlds silver medalist in the 1500 and gold medalist in the 200 fly. She’d have to qualify top 8 out of semis in the 200 fly, then come back potentially just three heats later to swim finals of the 1500. Hungary’s Boglarka Kapas could be in this boat – she’s won international medals in both the 200 fly and 1500 free, but last summer gave up the 1500 while winning gold at Euros in the 200 fly.

Any 200 IM/1500 free combos don’t seem super likely, and that’s a good thing, as they’d be pretty brutal – those two events are back-to-back in both heats and finals.

The biggest issue with the men’s 800 free can probably be avoided through some prelims relay substitutions, at least for swimmers from the top few nations. 800 free heats come directly after heats of the men’s 4×200 free relay. Looking back to 2017 World Championships results, there were a few men who contested both of those events (which were not back-to-back in the Worlds lineup): Italy’s Gabriele Detti, the United States’ Zane Grothe and Clark Smith, the Netherlands’ Ferry Weertman and Egypt’s Ahmed Akram.

A few more who could conceivably swim that double in Tokyo: Australia’s Mack Horton and China’s Sun Yang. The U.S. and Australia could probably find a way to get through prelims without their distance men. So, too, can Italy, which didn’t need Detti to win bronze in this relay at Euros last summer.

There isn’t exactly a Ledecky on the men’s side who can contend from the 800 down to the 100. But if there ever was, he’d have to face a double with the 100 free and 800 free at either end of the heats and finals sessions.

This was always going to be the hardest one to fit into the lineup for two reasons: (1) there were already relay events on 6 of the 8 days of competition and (2) most of the swimmers who would compete on this relay already have event schedules further crowded by other relay and individual events.

Most of the wrinkles on this relay are going to compound what are already intriguing lineup choices. The nature of the mixed relays gives nations some tough calls – where to maximize a stroke advantage in one gender or cover over a stroke weakness in a particular gender. Now, lineups for prelims and finals will also be shaped by the potential doubles around this relay.

The most obvious come in the men’s 100 fly, where the top swimmer from each nation has a very strong probability of making either prelims or finals of the mixed medley. In heats, the men’s 100 fly comes just two events before the mixed relay, with the 200 back in between. In finals, the gap is somewhat considerably wider.

The toughest call could be with 50 free/100 fly types like Caeleb Dressel, who could face a 100 fly finals/50 free semis/mixed medley relay finals triple on that night. But the U.S. can probably win that relay without Dressel, or may at least try.

In day 7’s finals session, almost every relay is going to struggle with the meet-ending trio of men’s 50 free semis/women’s 50 free semis/mixed medley relay finals. Most of the top anchor options (Dressel, Simone Manuel, Cate Campbell, Bronte Campbell, Kyle Chalmers, Yuri Kisil, Vladimir Morozov, etc.) will potentially be coming off of a 50 free semi, along with the multi-stroke specialists like Michael Andrew, Taylor Ruck, Rikako Ikee or Sarah Sjostrom). Of course, we have no idea if any of these swimmers will make the Olympics in the 50 free, be top options for relay legs or even have their nations enter a mixed medley relay. But the odds are pretty high that at least someone will be coming off of a 50 free to anchor this relay.

The other two conflicts for women are with the 200 back heats and finals and the 800 free finals. The latter isn’t super likely to be even an outside issue for anyone but Ledecky, who just might have enough range to be an anchor option were she not in the 800 shortly before the relay. The 200 back might affect good two-distance backstrokers like Kathleen Baker, Emily Seebohm or Kylie Masse, though the preferred strategy continues to be stacking male legs on back and breast to get clean water, with female legs on fly and free. (See: 2018 Pan Pacs, where both Australia and Japan beat the U.S. with man/man/woman/woman lineups. Or Asian Games, where all three medal-winning relays used that order.)

While there are conflicts in this lineup, you’d be hard-pressed to come up with a lineup that doesn’t create a double for at least a few athletes. The mixed medley relay didn’t really have any other options than day 6/7 – the first two days already feature prelims and finals of the 4×100 free relays, days 7 and 8 already feature single-gender medley relays for heats (day 7) and finals (day 8). Swimming the mixed medley on day 3 would double up with finals of the 100 back for men and women, day 4 would conflict with the men’s 4×200 and men’s 100 free semis, and day 5 would double with the women’s 4×200, women’s 100 free semis and men’s 100 free finals.

Potential conflict for Dean Farris who is currently projected to swim both the 200 free and 100 back on day 2/3. Tough double, but sure he can do it.

It’s going to be much tougher for him to qualify for those two individual spots in the first place. He’s going to have to beat either Murphy or Grevers in the back, and the 200 free is completely stacked.

Repent and thou shall be saved.

Dean personally wrote to the IOC and made the request for this double in an effort to level the playing field…He will still clearly win both, but before it was a certainty that he would win all three medals in both events.

Dean already intends on swimming every single event anyways. He’s going to cruise into finals and then break all of the world records, climb out of the pool before anyone else even finishes, and repeat. On the podium he’ll have Dressel or Murphy stand in so they don’t feel bad.

Sorry to be a grouch but I DESPISE the mixed relays. It makes the schedule unnecessarily bloated and will just tire top swimmers out more for their more important events.

Let’s just have the 1150 freestyle and call it even.

There’s only one mixed relay (mixed medley) in the Olympics. No mixed 400 free relay. Good thing too, otherwise Dressel could very well win all 5 relays + 100 fly, 50/100 free and tie Phelps.

I really like Dressel and want him to win some serious hardware in Tokyo, but wouldn’t want him to tie The GOAT’s record like that.

If the Olympics wanted to add relays I would much rather them have added Men’s and Women’s 4×200 Medleys instead of the mixed medley. I know the mixed relays are popular with smaller federations, but I just find them gimmicky.

Swimming has too many events. My two cents. Old story too.

This is neither here nor there, but does anyone know what Ahmed Akram Mahmoud’s full name is exactly? He’s listed here and on Wikipedia as Ahmed Akram, but on the South Carolina site he’s Akram Mahmoud. Elsewhere he’s all three, and earlier he was referred to as Ahmed Akram Abbas. Which is most correct/preferred and which are his surnames?

A common Egyptian naming convention has a child given a personal name followed by the name of their father and grandfather (eg Ahmed Akram Mahmoud). However, family names are becoming more common (eg Mohamed El Shorbagy). He probably just prefers his middle name just like Scott Tyler Clary does.

Adam Peaty was asked today at the British Championships if it bothered him that the 100 and 50 breaststroke were so close together (yesterday and today). He didn’t care whatsoever. “I’d swim them on the same day if that were the lineup. And it wouldn’t change the way I race.”
Sure, it sucks for some, but it’s never going to be perfect for everyone.

Will USA Trials have this same format (except no relays)? Prelims at night and finals/semis the next morning?!?

More than likely no because it wasn’t done with Rio , London, or Beijing as I recall. Usually it’s swum as a regular schedule and then the athletes adjust to the time difference at the training camp

Challenge for some athletes and coaches.
Joy for audience.
Everything will be gravy.