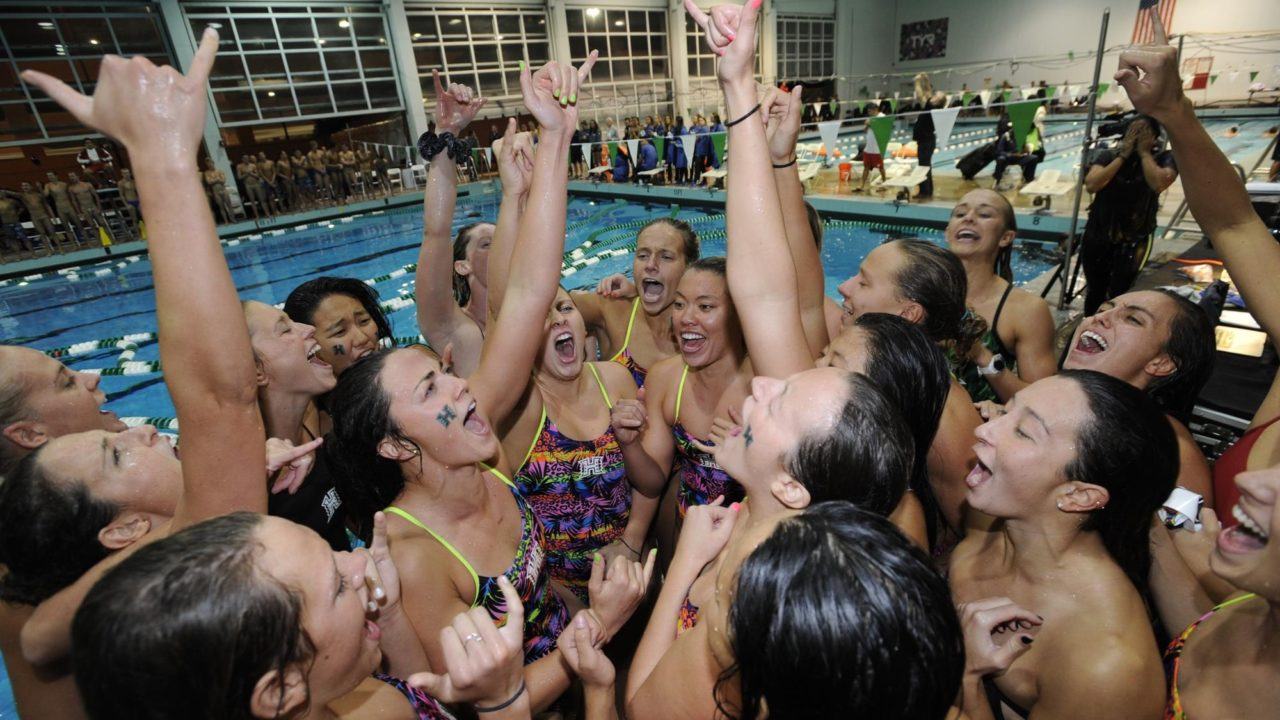 Both the UCSB men and Hawaii women repeated as MPSF conference champions on Saturday as 5 more MPSF Championship Records were broken on the final day of competition.

All 5 of those records came in women’s competition, meaning a record fell in all-but-two of the women’s events of the day. 4 of those went to Hawaii, who roared to a 200-plus-point margin of victory. That’s more than double the margin they had at last year’s meet.

On the final day of competition. Phoebe Hines opened up the scoring with a Meet Record of 15:54.31 that jumps her in to 7th place nationally in the event. While just short of NCAA Automatic Qualifying, the time will assuredly earn her a spot at the national championship meet in Columbus in March. She won the title as a freshman last year, and dropped 26 seconds to this season.

The enxt race meant another record – this time for UC Davis junior Solie Laughlin, who won in 1:55.22 – after cruising into finals in 1:58. She was about even with Haley Bertoldo of BYU going into the last 50, but Laughlin was the only swimmer in the field to split sub-30 to finish the race, and that was the difference in the times.

The last three records of the meet then all went Hawaii’s way. Senior Franziska Weidner broke the 100 free Meet Record in 48.05 (20th in the country, and another likely NCAA invite time). She parlayed that into a 48.11 anchor as Hawaii’s 400 free relay swam 3:18.33 for another Meet Record.

In between was a mark for Hawaii senior diver Madison Sthamann, who won the platform with a Meet Record score of 318.20. Hawaii scored the top 3 points on platform, and in total earned 180 diving points at the meet – less than their total margin of victory.

The final day of the men’s competition, and for that matter the entire men’s meet, saw a lot more parity. UCSB opened the day with a 1-3-5-6 finish in the 1650 free to take control of the meet. That was led by Logan Hotschkiss, who won in 15:08.04. They didn’t win another event on the day, but their depth was enough to guarantee victory regardless of the outcome of the 400 free relay.

Among the other highlight swims was another relay win for the Pacific men, who swam 2:54.04 including a 42.95 Miles Mackenzie anchor. They currently have 1 swimmer in position for NCAA qualification, Yahav Shahff, who ranks 18th in the 100 breaststroke (52.89). With still many men’s conference championship meets to go, though, that placing is precarious – and the Tigers need an individual invite in order to get their 200 free relay (which has an NCAA “A” cut) to the meet.