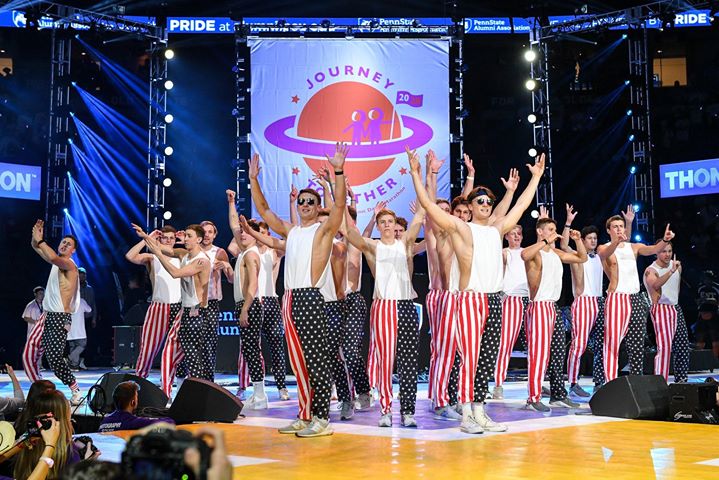 The Penn State men’s swimming and diving team were among over 700 students who participated in the 2020 THON dance marathon at Penn State University in February.

From the 21st through the 23rd, students, volunteers, families, and friends packed into the school’s basketball arena the Bryce Jordan Center to watch student organizations perform choreographed dances. THON volunteers and supporters nationwide participate throughout the year in various events that give hope and support to families battling childhood cancer. Besides providing a much-needed distraction for children with cancer and their families, the student-run event raises substantial funds to “provide emotional and financial support, spread awareness and ensure funding for critical research – all in pursuit of a cure.”

Dancing to a mix of “Can’t Tell Me Nothing” by Kanye West and “Win” by Jay Rock, “Sweet Victory” by David Eisley & Bob Kulick, and “Crazy Train” by Ozzy Osbourne, the group performed a medley that concluded with a swimming shark in an homage to the athletes’ typically-aquatic environs.

A week after this performance, the Penn State men finished 9th out of 10 teams at the 2020 Big Ten Swimming & Diving Championships, led by a 2nd-place finish from Michael Daly in the 200 back (1:40.63) and a 2nd-place finish from Gabriel Castano in the 50 free (19.06). Both swimmers were selected to compete at the NCAA Championship meet before it was eventually cancelled over COVID-19 concerns.

“Dance” is a strong word.