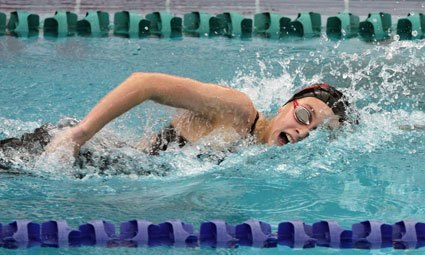 Emily Overholt added two more gold to her collection on the final night of the Mel Zajac Jr International being held at the University of British Columbia... Current photo via Swimming Canada

Emily Overholt added two more gold to her collection on the final night of the Mel Zajac Jr International being held at the University of British Columbia.

Overholt returned to the pool less than 20 minutes later to take the 100 freestyle in a time of 56.77 over half a second ahead of Meryn McCann who recorded a 57.52.

“I think I had about 15 minutes in between,” said Overholt.
“I didn’t really have time to think about how I was tired.
“This doesn’t happen too often at international meets, but it’s good to practise swimming back-to-back. I’ve been practising it a lot recently. I did it last weekend in Charlotte [at the Pro Swim Series meet]. This summer I actually have 400 IM and the 4×200 freestyle relay on the same day at Pan Ams. We’ve been working on doubling back, having multiple swims each day and being able to do them at a high level.”

Rachel Nicol collected her second win of the weekend taking the women’s 50 breaststroke in a time of 31.59 close to a second ahead of the field. Nicol’s time is the fifth fastest that she has ever posted and was not far off of her lifetime best of 31.15 which she put up in April.

Kevin Cordes swept the breaststroke events with a win the men’s 50 breaststroke. Cordes won the event in a time of 28.57. He was followed by Andrew Poznikoff who posted a 29.02.

Two Puerto Rican men had an outstanding race for the 200 butterfly title. Andrew Torres had a lead of over half a second at the halfway point over his fellow countryman Yeziel Morales. Morales had a strong second half but did not have enough in the tank to catch Torres. Torres won the event in a time of 2:03.16 followed by Morales who recorded a 2:03.20.

Russell Wood captured his third title of the weekend winning the 100 backstroke in a time of 55.88. Wood also won the 50 backstroke and the 200 IM.