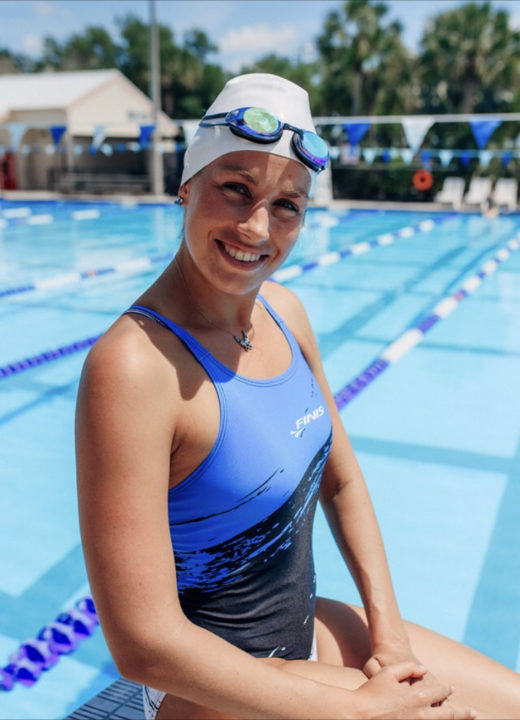 We interviewed Merle to understand her background as well as all the wonderful things she continues to do for the sport of swimming. Current photo via Rauno Liivand

At NZ Manufacturing, we like to feature prominent athletes who are not only using our equipment to better themselves physically, but also individuals who are helping to do good in the world.

MERLE LIIVAND IS NO DIFFERENT.

She is originally from Estonia and is a member of the Estonian National Swim Team and a former Baltic States Champion. We thought it would be interesting to interview Merle to understand her background as well as all the wonderful things she continues to do for the sport of swimming.

CAN YOU TALK TO US ABOUT YOUR BACKGROUND? WHEN DID YOU FIRST BECOME INVOLVED IN THE SPORT?

I’m originally from Estonia and in the post-Soviet Union there was no other choice for kids other than being active and playing outside. I built cross-country tracks in the front of my house at age 4 and during the winter I skied and, in the summers, I enjoyed running.

My mom enrolled me in modeling and acting school at an early age and I also enjoyed aerobics and dance classes as well. As I became older, I enjoyed being involved in cheerleading, but soon my health began to falter. I was constantly sick and had to spend significant time in the hospital. The doctors had a hard time determining what was wrong with me and so I was constantly in and out of the hospital. This time taught me how important it was to be healthy and I made a commitment to experience as much as possible once I finally was healthy again. Eventually, my family doctor recommended that I start swimming as a way to strengthen my lungs because I was having such trouble breathing. Initially, it was hard because many of my friends were already competing in competitions, but I was proud that I was able to make nationals during my first year as a swimmer.

WHAT WOULD YOU SAY HAVE BEEN YOUR GREATEST ACCOMPLISHMENTS AS A SWIMMER?

I would consider my greatest accomplishment the ability to build a business while still swimming at the highest level. I have won medals in the Baltic State Championships, won gold twice at the Florida Winter Championships, have taken part in Ice Swimming Championships where I won 2 medals and I just recently became number 6 in the world at the UIPM Triathlon-Biathlon World Championships.

Every medal has been bittersweet to me because of my unique path compared to other swimmers. Originally, I represented Estonia mostly in breaststroke events around the world, but during the past two World Championships, I have made the team as a 10KM open water swimmer.

In October of 2019, I swam 10KM with a mermaid tail without using my arms. No other human has ever completed this unique feat! I had quite a bit of fun doing this and was able to finish the 10KM in 2 hours and 54 minutes.

CAN YOU TALK ABOUT THE SACRIFICES THAT YOU’VE HAD TO MAKE TO BECOME A WORLD-CLASS SWIMMER? HOW DID THIS IMPACT YOUR UPBRINGING?

As a swimmer who has competed at the highest level, I’ve learned that nothing good comes easy. You have to take care of your “house” that is yourself. Mentally competing can be extremely difficult due to the physical demands that are required. You have to be away from parties, family time and friends because practice is so important. Also, there are plenty of days where you’re the only one in the pool or ocean and you still have to get your workout done with no one there to cheer you on. I love the holidays so I have to watch what I eat around this time of year because nutrition is so important.

My parents have also always been very disciplined with me. I left my small country of Estonia for Florida and these adjustments were difficult. I moved to the US and needed to learn Spanish very quickly based on the area where I was living. In addition, the US food and culture was quite an adjustment coming from Estonia. I’m so thankful that I now am living in the US, but originally was from Estonia. In Estonia I learned Estonian, Finnish, English and Russian and now I have adopted Spanish and am also working on learning Turkish as well.

WHAT DO YOU ENJOY THE MOST WHEN YOU’RE SWIMMING IN THE OPEN OCEAN?

When you’re swimming in the open ocean, you’re never guaranteed to have the same water conditions. When I’m swimming around Miami, I can truly see that every loop around the area is different. Open swimming requires quite a bit of critical thinking at a fast pace. You have to be extremely strong mentally to deal with sharks, jellyfish, and large waves. Nothing is in your control, but that is the fun part because you’re forced to cope with the unknown.

WHAT HAVE YOU SEEN WHILE SWIMMING IN THE OPEN OCEAN THAT CONCERNS YOU RELATED TO GLOBAL WARMING?

To me, it’s clear that our oceans have become warmer and full of pollution each year. When I started to do open water swimming around 2015, I didn’t have to schedule ocean times and worry about the practice or competition being canceled due to high temperatures or water quality. Sadly, this is the reality of today’s oceans. More people are becoming allergic to ocean plankton and the bacteria that’s growing due to pollution and high water temperatures. The past few years I’ve been actively involved in helping to clean up the oceans and what is happening to our oceans is truly heartbreaking. Sometimes I feel like I’m swimming in the ocean with trash, which is why I’ve tried to bring awareness to these issues on my Instagram account which can be found here: https://www.instagram.com/mjerlel/. In October I swam 10KM with a mermaid tail, but the idea was to bring more awareness to microplastics that can end up in the human mouth when you swim around beaches. The ocean is what keeps our entire ecosystem in balance and it’s extremely important that we take care of it. It’s possible that the entire open water sport could go away because of water quality, which is a shame because of the many new people that are starting to enjoy the sport thanks to triathlons and challenge races.

WHICH NZ MANUFACTURING/STRECHCORDZ® PRODUCTS DO YOU USE IN YOUR TRAINING?

I use a variety of products from NZ Manufacturing including the Short Belt, Long Belt Slider and I also use the Modular Set for use between the pool and dryland. NZ has some of the strongest equipment on the market. I know many athletes who have used other company’s products that break easily and have even caused minor injuries. NZ Manufacturing products last for years if you take care of them, which makes these products completely worth the investment.
Why do you choose to continue to use NZ Manufacturing resistance training products? What makes them better than the competition?

The strength, power and mobility learning that you get from resistance training products is key to successful swimming. In addition, it’s one of the easiest ways to travel around the world and still be able to train thanks to having NZ Manufacturing products in your swim bag. For example, many world-class swimmers love to feel the speed and power through the water but it’s not always possible to catch the final moments with fins. That’s why we use the Long Belt Slider on one side of the pool and then jump in the water and our coach will pull us back. This exercise allows you to feel more speed in the water and to perfect the tempo of your stroke. I also use NZ Manufacturing products as a great way to shake off the jetlag during competitions. All around the world you’ll find athletes who use NZ Manufacturing resistance training products to get ready for competitions.

We’re thankful that Merle took the time to chat with us about her wonderful swimming career as well as her commitment to improving our oceans. To learn more about Merle, feel free to follow her on Instagram at https://www.instagram.com/mjerlel/.

IF YOU’RE INTERESTED IN LEARNING MORE ABOUT ANY OF THE NZ MANUFACTURING PRODUCTS THAT WERE LISTED ABOVE, FEEL FREE TO BROWSE OUR WEBSITE WHERE WE GO INTO DETAIL ABOUT EACH OF OUR STRETCHCORDZ® PRODUCTS.