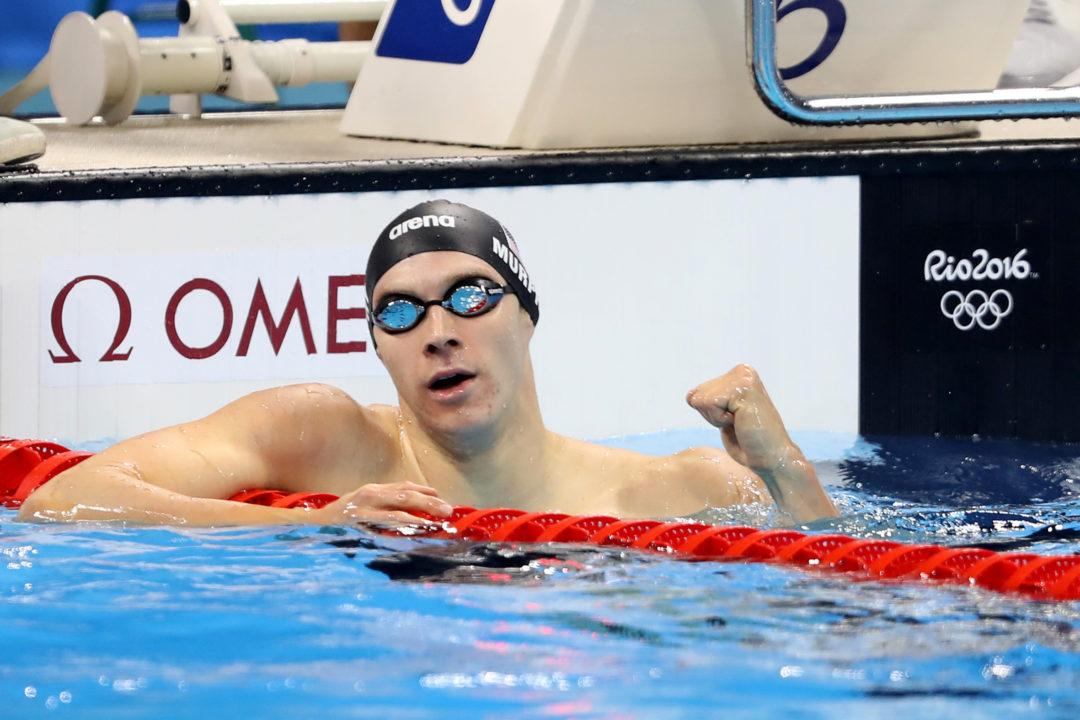 Rising California senior Ryan Murphy was the only NCAA swimmer who competed in the 15-16 season to earn two individual gold medals in Rio. Current photo via Simone Castrovillari

NCAA swimming and Olympic swimming are two of the most popular draws in the swimming world, as college rivalries bring out fans’ interest in a way that doesn’t have a lot of competition outside of the Olympics.  And with dozens of college swimmers representing the USA or other countries in the Olympics, it’s also interesting to see how NCAA teams stack up against each other when it comes to collecting Olympic hardware.

Below, we take a team-by-team look at the top five finishers in the 2016 NCAA championships, as well as some other schools that had swimmers earn medals.  Whereas in some previous posts we took a broad view of “college swimmer,” for purposes of this article we’re largely restricting our analysis to the performances of swimmers who swam with and represented their college team in the 2015-2016 season.  Even with that criteria, nine of the top ten schools (top five men and top five women) in the Division I NCAA championship meets had swimmers earn medals in Rio.

The Longhorns absolutely steamrolled their way through the NCAA championships this past March.  They kept rolling into July and August, too.  Rising junior Joseph Schooling followed up his NCAA record-setting victories in both butterfly events with one of the most memorable races in Rio, earning a gold medal ahead a three-way tie among legends Michael Phelps, Chad LeClos, and Lazlo Cseh.  Coach Eddie Reese continued a decades-long trend of putting Texas swimmers on the US men’s 4×200 free relay.  Reese’s charges accounted for three of the seven swimmers between prelims and finals, and rising sophomore Townley Haas had a top-ten split of all-time in the final, as the US secured yet another gold medal.  Schooling and Haas, plus Jack Conger and Clark Smith, the other two Longhorns on that 4×200 free relay, will all be returning to Austin this year.

The most successful individual US college swimmer was Golden Bear Ryan Murphy, a rising senior.  He earned this accolade by virtue of doubling up for gold in both backstroke events, then by taking down Aaron Piersol’s 100 back world record leading off the US 4×100 medley relay.  Josh Prenot grabbed an inividual silver in the 200 breast, while Jacob Pebley made it to finals of the 200 backstroke.  Both men have exhausted their eligibility, but Murphy will be back and looking to destroy records in yards one last time.

While the Gators had swimmers representing several different countries in Rio, only one earned a gold medal, and that was rising junior Caeleb Dressel.  Being that Florida did not have as a great reputation for producing sprinters as, say, Auburn, Dressel’s choice to commit there was widely questioned.  Yet, it’s hard to argue with the results.  Just a few months after demolishing the US Open records in the 50 and 100 yard freestyles, Dressel led off the US 4×100 free relay in a personal best time, en route to a gold medal in that event.  He then made the final of the individual 100 free before anchoring the prelims medley relay squad for the US, earning another gold.

The Wolfpack have been coming on strong at the NCAA level the past few years, and that progressed culminated when rising junior Ryan Held earned a spot in the finals for the USA men’s 4×100 free relay.  His swim helped the USA earn gold, and prompted one of the most memorable moments of the Games when he broke down crying on the medal stand when the Star Spangled Banner played.  NC State had several swimmers representing other countries in Rio.  The most notable is Simonas Bilis, who made the final in the 50 free, but has finished his NCAA eligiblity.

Under long-time coach Jack Buerle, the Bulldogs have been known as a team that keeps a lot of emphasis on long course all the time, but especially in Olympics year.  Although Chase Kalisz chose to redshirt and go swim under Bob Bowman with the NBAC Tempe group, the Georgia men still had plenty of success in Rio.  Rising junior Gunnar Bentz earned a gold medal for swimming the prelims of the 4×200 free relay, and fellow junior Jay Litherland made the final of the 400 IM.

While plenty of other schools had swimmers in Rio, only a couple other programs outside of the top 5 had active swimmers earn medals or make finals.  Indiana’s Blake Pieroni picked up a gold medal for swimming in the prelims of the 4×100 free relay.  A pair of redshirts who trained away from their respective schools, USC’s Santo Condorelli and Northwestern’s Jordan Wilimovsky, made it into the finals of the 100 free and 1500 free, respectively.

As we said above, the Bulldogs are known to keep a couple paws in the 50m world all the time.  Olivia Smoliga, a rising senior, earned a gold medal swimming backstroke in the preliminaries of the 4×100 medley relay for Team USA after making finals in the individual 100 back.  Brittany MacLean followed up a win in the 200 freestyle and second place in the 500 and 1500 events at NCAA with a bronze medal in the 4×200 free relay team as part of very strong Canadian team, along with a finals appearance in the 400 free.  Hali Flickinger earned a finals spot in the 200 fly.  MacLean and Flickinger are out of NCAA eligibility, but Chantal van Landeghem will be back in Athens after redshirting a year and picking up a bronze medal in the 4×100 free relay for Canada.

Swimmers associated with Stanford made a lot of headlines in Rio, but neither one of the two biggest names actual competed for the Cardinal this past season.  Katie Ledecky deferred a year to focus on Rio, and Simone Manuel redshirted.  It’s hard to argue with those results, as the pair collected six gold medals and three silver medals, and Stanford fans presumably can’t wait to get them to see them in action this NCAA season.  They’ll be joining rising senior Lia Neal, who was the only active Stanford swimmer to earn a medal, a silver for swimming in the preliminaries of the 4×100 freestyle for Team USA.

Like Stanford, some of the biggest names associated with California did not compete with the Golden Bears last season, but Terri McKeever’s group still had plenty of success.  Rising sophomore Kathleen Baker earned a silver medal in the 100 back, and then led off USA’s gold medal-winning 4×100 medley relay.  While Baker was the only medalist who swam on the California squad last year, several other swimmers competed for other countries, including Farida Osman, who’ll be back next year as a senior.  Plus, the Golden Bears will get Abbey Weitzeil, who like Ledecky, deferred enrollment for a year.

The Aggies are the only team in the top of 5 for either gender to not win a single swimming medal in Rio.  They did, however, have two finalists: Sydney Pickrem of Canada in the 200 IM and Beryl Gastaldello of France in the 4×100 free relay.  Both of those swimmers will be back with the Aggies next year.

The Cavaliers’ two medals were the result of just one swimmer: rising senior Leah Smith.  She earned an individual bronze medal in the 400 freestyle, and then was part of Team USA’s 4×200 freestyle relay, which earned the gold.  Smith is the defending NCAA champion in the 500 and 1650 freestyle events, but in order to defend those titles, she will presumably have to go through the most dominant swimmer on the planet right now, Katie Ledecky.

Indiana only finished 7th at NCAA’s, but arguably had a more impressive performance in Rio than several of the above teams.  Rising sophomore Lilly King generated headlines en route to a dramatic win in the 100 breast and also earned a gold in the 4×100 medley relay.  Add in a bronze medal from rising junior Kennedy Goss‘s prelims swim on Canada’s 4×200 free relay team, and active Hoosier swimmers picked up as many medals as any other women’s team.  Kelsi Worrell, who swept the fly events at NCAA’s for 8th place Louisville, also earned a gold medal by swimming in the prelims of the USA 4×100 medley relay team.

Chantal van landedhem picking up gold in 4×100 free?
Has she changed citizenship to Australian?

As for 2020 prediction, remember Cate in Rio.

Thanks. It’s fixed to bronze now.

That’s what happens when you train in the “bathtub” part of the year.

the best swimmer ever (phelps) don’t make his reputation in the bathtub though.

the best swimmer ever (phelps) don’t make his reputation in the bathtub though.