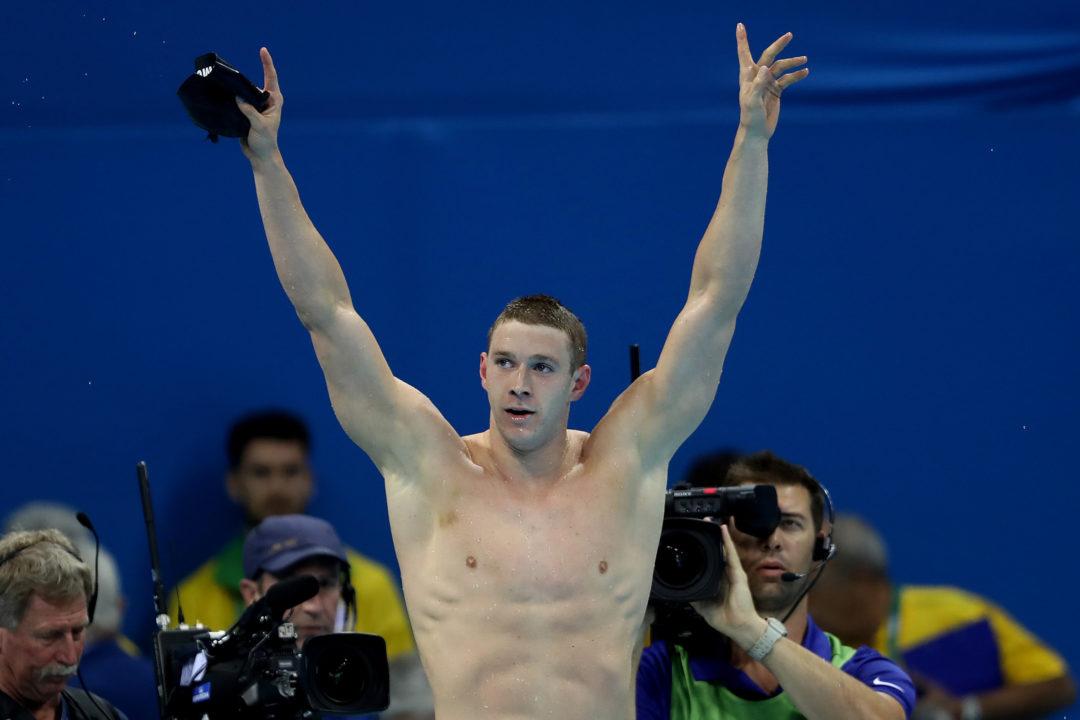 Ryan Murphy led off the American 400 medley relay in a new world record of 51.85 in the men's 100 back. Current photo via Simone Castrovillari

After nearly missing Aaron Peirsol‘s shiny suit world record of 51.94 in the individual 100 back by just three one-hundredths of a second, American Ryan Murphy got the job done during the last race of these Olympic Games.

Murphy led off the U.S. 400 medley relay in 51.85, the fastest swim in history. He became the 2nd fastest performer ever and the second man ever under 52 seconds in the individual race with his 51.97, and now he moves firmly into the top spot.

Murphy’s swim vaulted the Americans into a huge lead, one that they needed with Great Britain’s Adam Peaty swimming the breaststroke leg. Peaty got the Brits a small lead, but Michael Phelps and Nathan Adrian came through as they always do for the U.S., as they won gold in a new Olympic record of 3:27.95.

There was a lot of talk about when this world record would be broken, as Murphy, David Plummer and Matt Grevers all seemed within reach at the U.S. Olympic Trials. It didn’t happen there, but in interviews Murphy sounded confident he was capable of achieving it. He surely wasn’t too concerned about it in the 100 back final here in Rio – the gold medal obviously meant everything – but to get it here along with a gold medal was definitely a satisfying end to the meet. It finishes off an incredible year for the 21 year-old, one that has made him one of the biggest swimming stars in the world.

This isn’t the first time the U.S. medley relay has been led off in a world record at the Olympics. Back in 2004, none other than Peirsol did just that, leading off in 53.45 for the world record at that time and vaulting the U.S. to gold in 3:30.68.

This win keeps the American streak alive, as they have never lost this relay on the Olympic level (they didn’t compete due to the 1980 boycott).

This swim caps a near perfect week for Murphy, as he swept the backstroke events and leaves here with three gold medals.

Not only did he help extend the U.S. streak in the medley relay, he also continued the American backstroke tradition, as the U.S. has now won six straight titles in both the 100 and 200 back.

SwimSwam– Please get Aaron Piersol’s take on this. He doesn’t seem to be on Twitter and I am dying to know.

IIRC Piersol had contact info for all three guys at Trials (Murphy, Plummer, Grevers) to congratulate them if they broke the record, and that he was going to be genuinely happy for any of them to do it.

Question – what would have been “more” perfect then? World records in the two individual events as well? Three golds in three swims is pretty awesome.

Possibly the swim of the meet.

Certainly in the discussion at least.

So, Negative Hillary, or whatever your name is. You said NO WAY Ryan would set a record. Let me be the first to hand you your first serving of tumble pie.

Could we have a split comparison please?

Its honestly about the same. Murphy just slightly outsplit him on thr second 50

It’s amazing how much the backstroke has improved since 2004.

Backstroke, much more than breaststroke, has way more depth close to the top. Consider how Grevers, Lacourt and Larkin have all been 1.3 seconds faster than the record in 2004…the stroke has come a long way. Perhaps the starting wedge has influenced that progression.

What a swim, can wait to see what this young man can do in the future!

this young man will toy with both 100 & 200 back WR in the next olympic cycle…..hopefully he will surpass himself in the Tokyo olympic…..

poetically, he does it to lead off the 400 medley relay, 7 years after piersol did the same at the 2009 world champs.

But Piersol didn’t set a WR leading off the relay. He did it at US Nats in 09