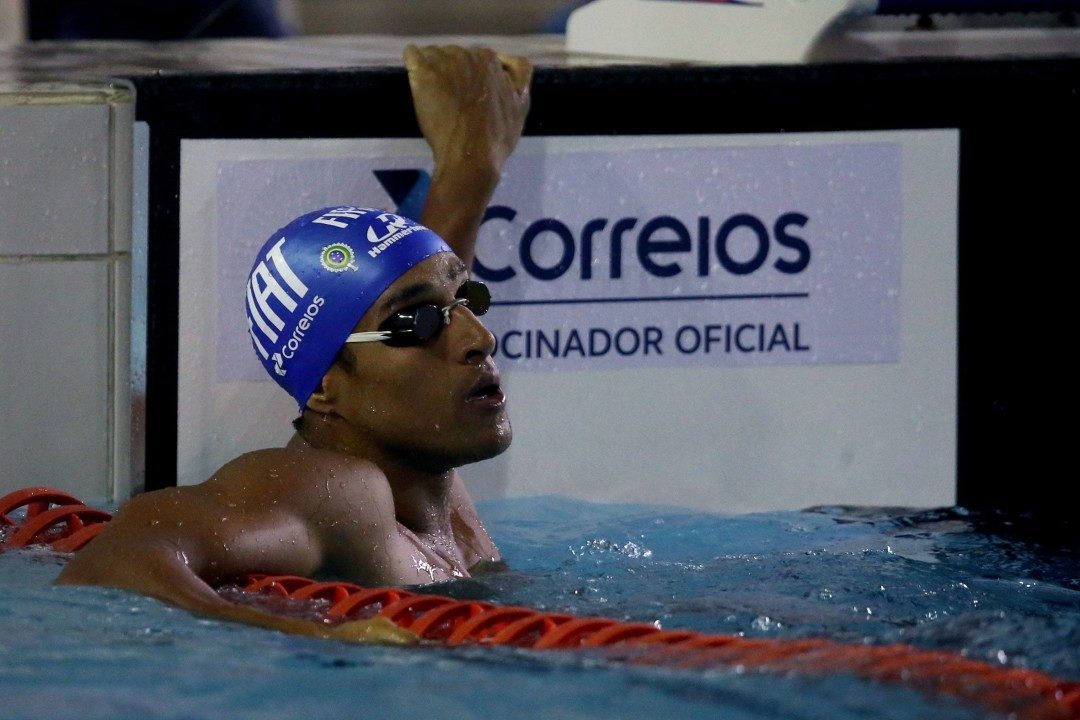 D’artagnan Dias contributed to this report.

Two more FINA ‘A’  qualifying standards were achieved today at the third finals session of the 2015 Brazilian Open in Palhoca, Santa Catarina. Joanna Maranhao represented the female competition with an ‘A’ cut in the 200m IM and Thiago Simon snagged the 200m breast for his chance to race at Rio 2016. Today’s prelims and finals raise the grand total of FINA ‘A’ qualifying standards for the Brazilian Open to 20. The location today experienced pad and scoreboard wires malfunctions and the wait for posted results on the scoreboard added to the running time. These conditions weren’t ideal but several athletes including those from Pinheiros, the 2015 National Club Champion, performed exceptionally despite the issues to secure their Rio 2016 qualification standards.

Ana Zortea of CR Flamengo defended her top-seed in the 50m back final with the only sub-30 mark of the field at 29.50. Isabela Silva of Corinthians touched behind Zortea for second with her split of 30.07 and Cibes’ Maria Almeida rounded out the top-three at 30.24.

Guilherme Guido and Daniel Orzechowski shaved time of their prelims entry and raced the 4th and 5th fastest 50m backs in the world with their respective marks of 24.76 and 24.97. Guilherme Masse touched third and dropped .45 off his prelims to post a 25.54.

Etiene Medeiros of SESI-Sao Paulo might have scored a FINA ‘A’ cut and a South American record this morning with her leading time of 54.26, but she finished above the qualifying standard at 54.78 in the finals session. She was, however, the only sub-54 of the heat and she took the women’s title over Manuella Lyrio (55.20) and Luana Ribeiro (55.40).

The men’s final of the 100m free saw only three swimmers repeat their prelims ‘A’ qualifying standard. Bruno Fratus turned at the 50m mark as the leader in 23.01, but Nicolas Oliveira split 23.29/25.37 to win the men’s title in 48.66. Marcelo Chierighini (48.72) jumped Matheus Santana (48.79) for second place in the final heat. The only problem for Auburn trainee Chierghini is that his final’s time hit just .01 behind Santana’s prelims time (48.71). As it stands, Brazil’s top-two fastest 100m freestylers for Rio 2016, unless decided at Maria Lenk, are Oliveria and Santana with Chierighini and Alan Vitoria participating on the relay.

In light of Beatriz Travalon’s scratch out of the A-final, Pamela Souza cut some time off her morning swim and eclipsed the women’s final by touching in 2:32.94. While it was off the ‘B’ cut standard of 2:32.08, she turned halfway in 1:13.68, and remained the front-runner the last 100 meters. Top prelims seed, Carolyne de Souza, was the next closest at 2:34.14 and Andressa Simiao knocked off two seconds to capture third at 2:34.67.

Thiago Simon picked himself up a FINA ‘A’ cut and won the men’s 200m breast with a quick 2:11.29. The South American record holder in this event, Henrique Barbosa, cruised to second place to a tune of 2:13.86 as Tales Cerdeira claimed bronze with his time of 2:14.13. Arthur Pedroso became the 6th swimmer in this event to achieve a ‘B’ cut by matching the standard at 2:16.27.

Joanna Maranhao became the second swimmer to achieve an ‘A’ cut in finals by dominating her heat in 2:14.04. Nathalia Almeida (2:16.61) finished nearly two-and-a-half seconds behind Maranhao and Florencia Perotti registered a ‘B’ cut with her finishing time of 2:17.76.

The men recorded four ‘B’ cuts and one ‘A’ cut thanks to Henrique Rodrigues’ finish of 1:59.85. Bradonn Almeida stepped in to fill Thiago Pereira’s scratch and touched for second place in 2:02.44 while Gabriel Ogawa (2:02.54) hit just a tenth of a second behind Almeida for third.

Dias tells us that while Pereira clocked a 1:58.32 in the preliminaries, he pulled out the men’s 200m IM final to focus on a training session. Pereira is among the Brazilian athletes who are not choosing to taper for the Open.