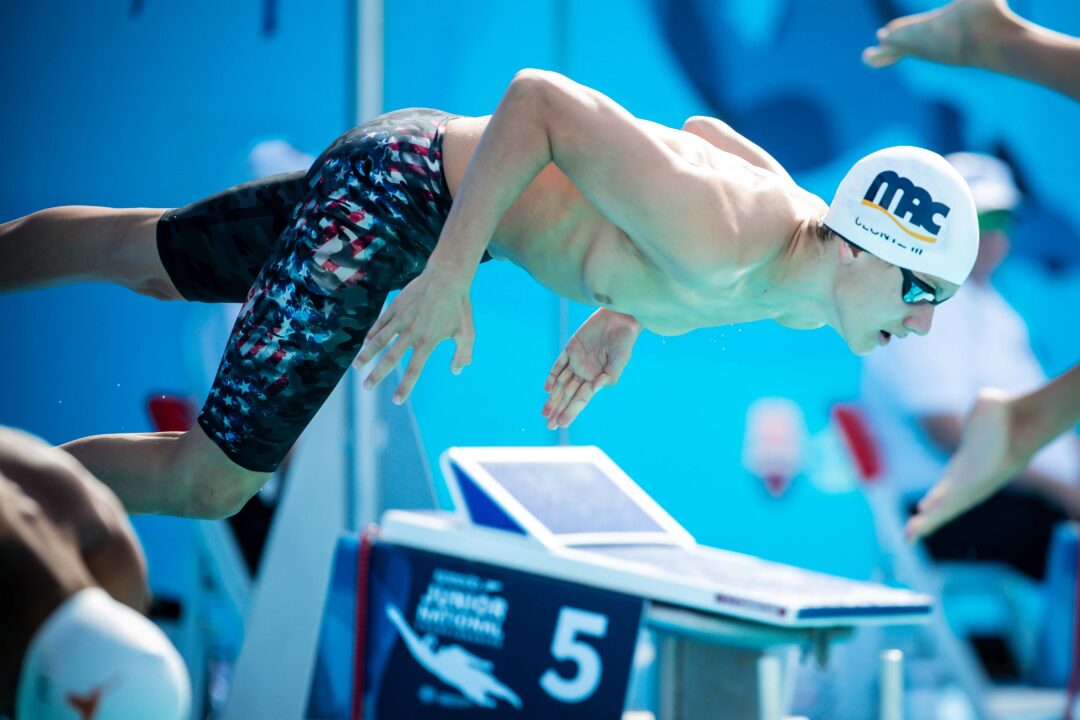 Norvy Clontz of SwimMAC Carolina is now the fastest American 15-year old ever in the 400 meter freestyle after a 3:50 on Wednesday in Irvine. Current photo via Jack Spitser/Spitser Photography

15-year old Norvy Clontz of SwimMAC Carolina is now the fastest swimmer ever at his age in the 400 meter freestyle.

While USA Swimming doesn’t keep single age records, only one swimmer has been faster at either end of the 15-16 age group: Larsen Jensen, who swam 3:50.68 in 2002. Jensen was less than three weeks from his 17th birthday when he swam that time.

Globally, the person who has come closest to that recently was Italian Lorenzo Galossi, who swam 3:45.93 at the Italian Spring Championships in April.

While Clontz’s time is a ways away from those swims, it is the latest spark in American middle distance swimming, which is a discipline where the US has lagged behind the world for most of the last 30 years. The only US medalist in the 400 free at the World Championships since 1986 was Connor Jaeger, who won bronze in 2013. The US has had more success in the event at the Olympic Games (they’ve won the bronze medal at 5 of the last 6 Olympic Games), but also don’t have any silver or gold medals since winning both in 1984.

Clontz’s previous best time of 3:53.71 in the 400 free came less than a week ago at Summer Nationals. Between the two meets, he has lopped five-and-a-half seconds off his best time of 3:57.13, done in April.

Clontz is now the 15th-fastest American of any age in the event this year. Only three other teenagers rank ahead of him on that list; four of those are 19 (Charlie Clark, Luke Hobson, James Plage), and the other is 18 (Alex Enyeart).

Below are two splits comparisons tables to show how far Clontz has come, and the swimmers he’s chasing.

1984 was the year that mattered. I had several McDonald’s game cards for men’s 400 freestyle. The employees at the McDonald’s just outside the Stardust sportsobook entrance were so sick of handing out those cards all day long they finally figured out they could get rid of them early and tell all subsequent customers sorry we’re out. Consequently we’d walk over there for a 25 cent ice cream cone and come back with dozens of cards.

I became the go-to guy in terms of others from the Stardust asking me if we had a chance in this event or that event, ones that they needed the most. Everybody knew I followed the so-called minor sports. Finally I just started… Read more »

I feel like there are probably a few more Australians in between Thorpe and Clontz also.

Clontz is impressive even by Australian standards in the 400 and would be ranked #2 in the age rankings behind Thorpe.

Ian Thorpe was an anomaly