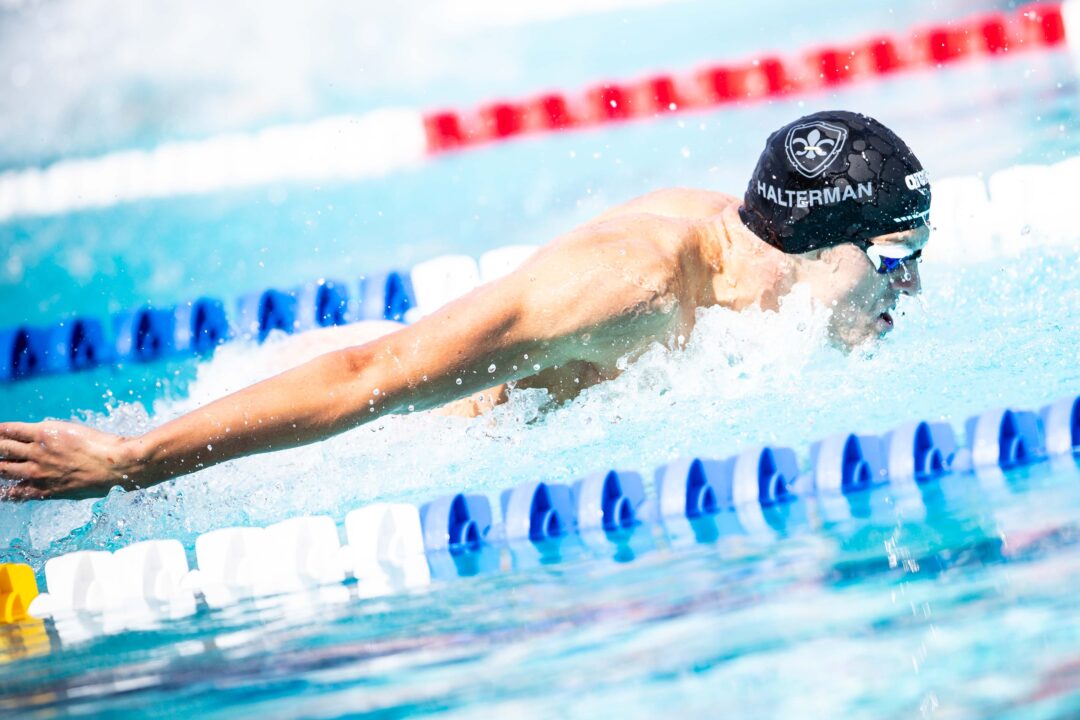 The stakes were high, but that didn’t stop all 5 of these young swimmers from delivering great performances.

It was an exciting evening of racing in Irvine tonight, as swimmers lit up the William Wollett Jr. Aquatics Center. Swim fans who where there in person got to watch NAG records, meet records, and plenty of other fast swimming, but here are some of the key videos for those who couldn’t make it in person, courtesy of USA Swimming’s YouTube channel.

17-year-olds Jillian Cox and Hayden Miller broke away from the field on the first 100 of the race, and shortly thereafter, it was all Jillian Cox. After a dominant performance in the women’s 800 free on Monday night, it felt like Cox had a big swim in the tank, and, boy, did she ever.

The 4:08.27 is a massive swim for Cox, who will be representing the U.S. at the Junior Pan Pacs in just a few weeks. She hadn’t yet been under 4:10 before in her career, and blew through that barrier tonight. She also moves up to #20 all-time in the 17-18 girls rankings, and keep in mind that she’s done so while still being just 17. She’ll also get another stab at lowering her time even further in just a few weeks at Junior Pan Pacs.

A race quickly developed in the middle of the pool in the ‘A’ final between Norvin Clontz, Henry McFadden, Aaron Shackell and Sean Green. Clontz took the race out far more conservatively than much of the rest of the field, flipping 5th at the 50m mark, but had worked his way into 1st by the 150m turn.

Clontz would pull away from the rest of the swimmer on the 3rd 100 of the race, keeping his 50 splits well under 30 seconds. The 15-year-old Clontz would ultimately shatter the Junior National meet record, vaulting himself up to #2 all-time in the 15-16 boys age group as well. Clontz is also now the fastest 15-year-old in American history with that performance.

Carmel Swim Club 15-year-old Alex Shackell completed her sweep of the women’s fly events at these Championships, blasting a new personal best of 58.33. Not only does the swim take half a second off Shackell’s personal best, it moved her up to #6 all-time in the 15-16 girls age group. Annika Parkhe tied her time from this morning, swimming a 58.71 again. Parkhe had moved up to #7 in the all-time 15-16 rankings this morning, but Shackell jumped back over her tonight, moving her down to #8.

Bryce Halterman got it done again, shedding more time from his personal best to beat out Thomas Heilman at the finish. The meet record that is posted of 52.57 is incorrect, as Andrei Minakov swam a 51.88 to win the event back in 2018. Nonetheless, it was an incredible performance from Halterman, and one that lifts him to #5 all-time in the 17-18 age group.

Thomas Heilman also swam a new best time by half a second, narrowly missing Luca Urlando‘s 15-16 NAG of 52.40. That’s not really such a big deal, as Heilman only just turned 15 at the end of January, and thus, has plenty of time left to break that record. He moves up to #2 all-time in the 15-16 age group.

JoJo Ramey got out to the early lead and never looked back, roaring into the finish first by well over a second. While the swim tonight was off Ramey’s personal best of 2:08.90, it was her fastest time of the year in the vent by nearly a second, and her first time under 2:10 this year as well.

There was never any doubt Josh Zuchowski was going to win this title. He immediately took over control of the race, getting into the 100m turn in a speedy 57.46. He held on well to his pace on the 3rd 50, getting into the 150m turn at 1:27.77. It looked as though Zuchowski might just dip under 1:58 for the first time in his career, as he exploded through the final breakout. He did ultimately fade just a bit on the final 50, swimming a 30.65. The performance also marks a personal best for Zuchowski by 0.02 seconds. He stays at #15 all-time in the 17-18 age group.

Elmbrook Swim Club was dominant in the women’s 200 free relay, cracking the 15-18 National Age Group Record as well. Maggie Wanezek got her team out to the early lead, splitting 25.99 on the lead-off leg. They didn’t take their foot off the gas, as Lucy Thomas went next with a sizzling 25.36 to put the team into the 100m wall at 51.35. Campbell Stoll went 3rd, splitting 26.06, then Abby Wanezek anchored in 25.48, leaving no doubt EBSC would be standing at the top of the podium.

Dynamo Swim Club broke the National Age Group Record in the boys 15-18 200 free relay tonight. Owen McDonald got the team out to a 23.68 on the lead-off, then Leo Roden held the team steady with the leaders, splitting 22.96. Cooper Cook went 3rd, splitting 23.36, then Idris Muhammad anchored in a blistering 22.26 to bring his team to victory, with NAG to boot.