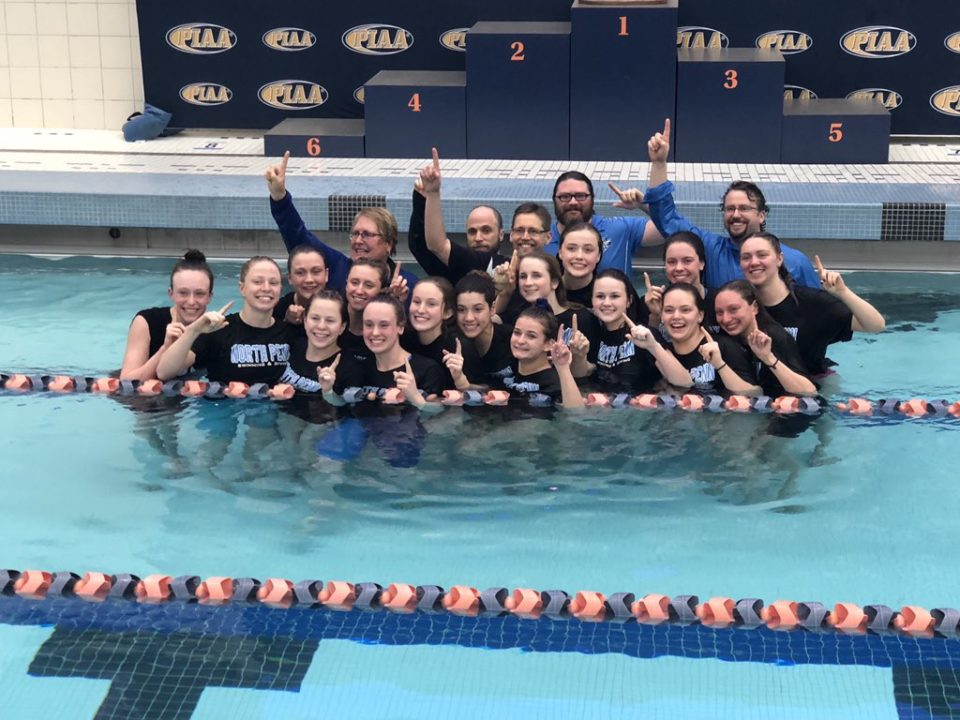 The 2019 PIAA Class 3A State Championship Meet occurred over a two-day period, contesting the 200 medley through the 100 fly (and adding in the 200 free relay), while swimming the rest of the events the next day.

North Penn come into the girls meet looking to defend their title from last year’s meet, while North Allegheny return as the defending champions on the boys side behind their famed 400 free relay national high school record. Three state records were broken throughout the course of the meet.

To make it a two-peat, the North Penn Knights won their second straight PIAA Class 3A State Championship team title, amassing a final score of 243 to out-pace second place Upper Dublin by 77 points.

Abbie Amdor of Upper Dublin had a phenomenal meet to end her high school career. The senior first won the 200 free in a swift 1:46.66 by almost two seconds, then scorched her mark as the only competitor under 50 seconds in the 100 free, taking the win with a 49.32.

Speaking of ways to end a career, Fox Chapel freshman Zoe Skirboll certainly started her career with a bang, dipping below 2:00 to take the victory in the 200 IM in a 1:58.75. Skirboll would later be narrowly out-touched in the 100 breast by junior Laura Goetter of Butler; the two posted times of 1:01.13 and 1:01.23.

Anna Kalandadze, a senior representing Lower Merion, became the only competitor in the field to break 4:50 in the 500, registering a 4:48.96 to easily take the win.

Despite losing two members of their legendary free relay, North Allegheny dominated the team standings – registering a total of 279 points to win their third consecutive PIAA Class 3A State Championship. Finishing second was North Penn at 196 points, marginally ahead of Lasalle College’s 191 for third.

The only relay that North Allegheny didn’t win was the 200 medley relay, which came down to a photo finish between them and Upper St Clair. Beyond their close race, the event was home to a plethora of fast splits.

Jack Fitzpatrick duked it out with North Allegheny’s Richard Mihm on the backstroke leg, with the two scorching times of 22.61 and 22.70. Sophomore phenom Josh Matheny followed up Fitzpatrick’s leg with a 24.10 on the breaststroke leg, which was notably rivaled by Upper Dublin breaststroker Matthew Jensen’s 24.11. Although Upper St Clair had the weaker back half, Reese Samuel (23.08) and Ryan Senchyshak (20.88) ultimately brought home the win in a final time of 1:30.67 to North Allegheny’s 1:30.70.

North Allegheny senior Jack Wright dropped a bomb in the 200 free, swimming a blistering 1:35.04 to top the field by over three seconds.

Not definitive, but next-best that I can find is Adam Chaney at 19.73

And I don’t recall splits faster than 19.06 for any current prep. I imagine that split ranks pretty high all-time as well.

It was also announced that the lead off swimmer in the girls 200 free relay, Heather MacCausland from Downingtown East, broke the state 50 free record of 22.73 set last year by Olivia Livingstone, with a 22.67.

How is this a 3a state meet, these times overall are really fast

Wanna sprite – different states have different classification systems. In Pennsylvania, 3A is the ‘biggest schools’ and usually the fastest/deepest meet in the state.

The top end quality is there though not necessarily the depth in 3A for a state the size of PA. A lot of the talent gets split to Easterns and it is better to rank the top times across 2A, 3A and Easterns to get the real picture of HS times in PA.

4 guys under 44 is seriously impressive… wow