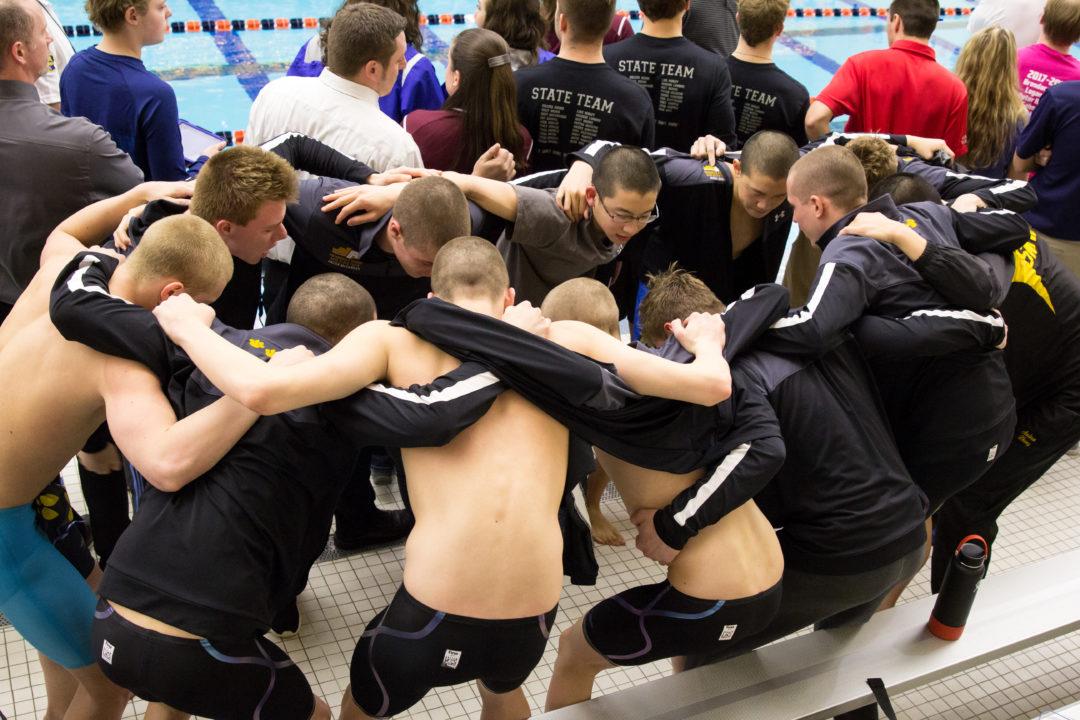 The North Allegheny boys swam the fastest 400 free relay ever done by a high school team on Thursday. Current photo via Brian Wright

The Independent Schools’ grips on the unofficial overall national high school relay records came to an end on Thursday, when a quartet from North Allegheny High School in Pennsylvania swam a 2:53 in the 400 free relay in the AAA State finals.

The group of Mason Gonzalez (43.27), Andrew Zhang (44.24), Jack Wright (43.22), and Rick Mihm (43.08) combined for an incredible 2:53.81. That time broke not only their own National public school record, of 2:57.59, set in December, but also cleared the famed Bolles School independent schools’ record of 2:54.43 from 2012. That Bolles relay included Olympic gold medalist Ryan Murphy, Olympic gold medalist Joseph Schooling, and Olympic 4th-place finisher in the 100 free Santo Condorelli.

The swim also broke the 15-18 National Age Group Record of 2:55.96 that they set at the 2017 Winter Juniors – East championships in December.

While the National Interscholastic Swim Coaches Association (NISCA), the official national record-keeping group of high school swimming, doesn’t recognize overall records, the fastest of the public and independent school records are colloquially referred to as overall records. Until Thursday, all of those records were held by independent schools – and weren’t that close.

But that’s now changed, thanks to North Allegheny’s swim – that had an incredible three swimmers go sub-44 in a student body of around 650 students per grade.

Gonzalez, the leadoff leg, was even faster in the individual event, swimming a 43,03 lifetime best, ahead of his 43.62 from this meet last year. After winning the 50 free earlier in the meet (19.99), he came away with a perfect 4-for-4 in sprint relay titles. That included North Allegheny’s 200 free relay, where with Gonzalez, Wright, Mihm, and Joel Songer broke the public schools’ record on Wednesday (Race Video | Record recap).

What makes these North Allegheny records even more special is that all of the swimmers developed as a group with the Allegheny North Swim Club and now with North Allegheny High School. Of the 5 swimmers involved in the National Record relays this weekend, 4 have been with the Allegheny North Swim Club since at least 2009, and Jack Wright has been with the club since he was 11 in 2011 (and didn’t previously have any USA Swimming affiliation). These were fully home-grown relay records.

New Trier, a public school, became the first sub-3 minute high school relay in 2012. Not long after, Bolles dropped that record by 5 seconds.

It’s sad to see the negative votes in something that is so positive & significant.
These are home-grown kids who simply beat a spectacular private (recruiting involved) team.
Words such as ‘no-class’ and ‘poor sportsmanship’ come to mind.
Hats off to these true superstars.

The only thing I don’t like from the comments made here is the accusation that we recruit and that the growth of these boys is inorganic. Most of these boys started out when they were 9 years old in our USA Swim Club, Allegheny North Swim Club. Jack started out when he was 11. They all went through the hard work and effort to move up to the top group in our club, until they got into high school and then moved up to our Senior Group. All of them have been friends and teammates throughout the years. They are all hard-working, motivated and humble young men, who respect their competition and will congratulate them if they are beaten. We… Read more »

It doesn’t matter if this is organic or not who cares it’s sweet. Bolles is a private school and that team was inorganic and they hold all of the records but no one complains cause it’s expected to have talent there. NA is super talented so sit back and enjoy.

Congrats to the North Allegheny boys free relay! That is some fine swimming.

A minor correction: the artucle states that there are 1400 students at North Allegheny high school. However, this is just the student population for grades 11-12. North Allegheny is a big school district. (Not that this detracts from their achievement.)

I like that paragraph on all these kids being home grown long term swimmers at North Allegheny. Many coaches can have a one-off great swimmer, but that’s awesome to have so many at once. Anyone know if that same coach has been there the past few years? That really says something about the coaching.

This is a group of highly motivated kids that excel in many areas, not just swimming. NA has a long legacy of producing swimmers that go on to swim at top tier schools. Many of them seek outside training.

Just as with any sport, you get private instruction to work on your technique and improve your skills. Baseball players get outside lessons from hitting and fielding coaches, basketball players get shooting and ball handling lessons and so on. We are not the only ones getting outside training. There are swimmers from every team in District 7/WPIAL that get outside training. So it’s not just our swimmers who do this.

how about posting results please

I may be wrong on this but I thought New Trier was the second school to break 3. the first being the legendary team from peddie school at Easterns waaay back in the 90’s. Still the lasalle pool record I believe