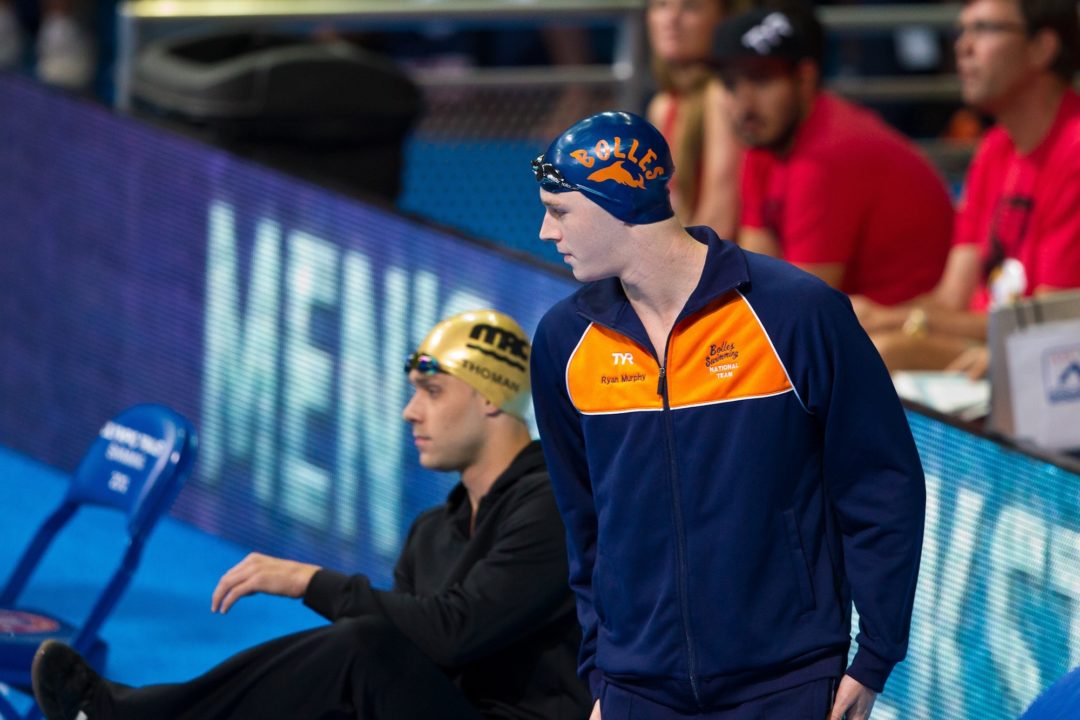 Ryan Murphy and his Bolles teammates were destroying State and National Records all day long on Saturday in Orlando. (Photo Courtesy: ©Tim Binning/TheSwimPicutres.com)

The 2012 edition of the Bolles School high school men’s swim team might be the best high school team in history. Even beyond the big superstar names that everyone knows (Schooling, Murphy, Condorelli), there is a ton of depth in this roster that nobody ever talks about.

Someone might be able to debate that, hat they did on Saturday at the Florida 1A (small schools) High School State Championship meet, though, will go down in swimming lore as perhaps the greatest single day of high school swimming any team has ever put together. They broke a total of 5 National High School Records, and became the first high school team in history to simultaneously hold all three National High School relay records.

They achieved this by swimming their best three swimmers in all three relays, which speaks a little bit to the story of their depth, but in the process they just demolished old records.

The finals haul of 4 records started with the 200 medley relay, where they swam a 1:28.02. That knocked more than a second off of the previous Bolles-held record of 1:29.79 set by Bolles back in 2009. In 2009, a young freshman named Ryan Murphy led the relay off in 23.32 (he’s actually been taking this 200 medley relay to State Championships since he was in 8th grade).

Murphy is the only holdover from that veteran relay, but he set a serious tone in this 200 medley with a 21.09 in a 50 backstroke. There wasn’t a single swimmer at last year’s NCAA Championship meet who led off the medley relay that fast; Murphy will be a Cal Golden Bear next season.

One swimmer alone, though, cannot make a National Record relay. He was followed by junior Joseph Schooling in a 25.48 in breaststroke, a 21.61 from junior Josh Booth on the butterfly leg, and a 19.64 from USC commit Santo Condorelli to top things off. That means they had one swimmer, Schooling, in an off event, and they still crushed the record.

Even before that swim, though, Murphy already had a record coming out of prelims. There, he swam a 45.34 that broke both the National High School, as well as the 17-18 National Age Group, records in the 100 backstroke that were previously held by David Nolan of Hershey, Pennsylvania. Nolan’s best as a high schooler was 45.49.

When Nolan broke that record two seasons ago, it seemed like it would stay for a long time. Afterall, he cleared more than a full second off of Cole Cragin’s record before him. Murphy, however, came through and lowered it again.

He cruised to a 48.08 in finals, ensuring himself the State Championship and preserving his energy for a 400 free relay swim, but that’s another etching of his name in the record books.

Back to finals, the third record of the day to go down was Joseph Schooling in the men’s 100 fly with a 46.50. Nobody was looking all-that-hard at the junior Schooling in this event for national records, especially with everything else going down in Jacksonville, but the Singapore Olympian had been a 47.0 last season as only a sophomore, so this result is right-on-target for him.

This took down Maclin Davis’ freshly-minted record from February that was 46.64 (he was then the first high school swimmer to go under 47 seconds). Sean Fletcher still holds the public school record in 47.09. Interestingly, they both went out in identical 21.79’s, but Schooling, who is much better than Davis in the 200 fly, closed just a bit better.

Sometimes, it’s harder for people to put relay swims in perspective than it is individual swims. Consider, though, that this means the relay averaged a 19.8 per swimmer. This time would have almost qualified for last year’s NCAA Championship Meet. And they’re only in high school. There are only a handful of swimmers who have gone under 20 seconds in high school, and this team averaged that. That’s incredible. The four on this relay were Murphy, leading off in 19.54 to break a state record and a National Independent HS Record, Schooling 2nd in 19.73, Emiro Goosen 3rd in 20.54, and Condorelli again on the anchor in 19.46.

Then, in maybe the most impressive of the three relays, Bolles ended the meet with a 2:54.43 in the 400 free relay. Keep in mind that last year, a fantastic relay from New Trier High School in Illinois became the first to dip under three minutes in a high school meet. Now, with this swim that’s averaging around 43.6’s, Bolles has set the bar in a different stratosphere. Murphy led off in 42.95, which is another National High School Record. That took down a legendary mark of 43.43 set by Joe Hudepohl in 1992 – two decades ago. He was followed by Santo Condorelli in 43.11, Josh Booth in 44.67, and Schooling this time on the anchor in 43.70.

Though not a National Record, Condorelli also won the 50 free individually in 19.88.

That is the story of the greatest day that any high school team has ever had, but instead of letting it hog the spotlight, instead we’ll just shine a brighter light on all of the fantastic swims at this meet.

Junior Rasmus Skjaerpe, who will be gunning for a spot on the 2016 Norwegian Olympic team, won the men’s 200 free in 1:38.20: more than two seconds better than his personal best. Skjaerpe was also 2nd behind Schooling’s National Record with a 49.08 in the 100 fly – in total, there were 5 swimmers in that race under 50 seconds (including Bolles’ other butterflier Booth in 49.13 for 3rd).

Senior Quinn Cassidy won the 200 IM an event later in 1:49.69, using a big breaststroke leg to pull away from a field that includes Julian Radice and sophomore Javier Barrena-Lorono. Barrena-Lorono was another one of those impressive pieces from Bolles, taking 3rd here in 1:51.77. He’s a name to watch for the next generation of Bolles superstars.

Cassidy, already established as a great breaststroker, also won the 100 breast in 56.87. He’s another outstanding recruit that will be joining Florida next fall: a Florida team already rich with breaststroker/IM’ers.

In the men’s 100 free, absent at least the three best 100 freestylers in the state from Bolles, there was still plenty of speed and talent. Daniel Spas from American Heritage won the race in 44.55. That takes Spas from a good sprint recruit to an elite sprint recruit, which will help the Florida men next fall begin to build back toward the top 5-or-6 in the country as their sprint group grows.

Matt O’Donnell won the 500 free in 4:29.51 for Cardinal Mooney. Lake Highland Prep stuck a pair of swimmers in the top 4, with Alex Pena touching 2nd in 4:30.74, and David Perez tying for 4th in 4:32.55. Both of them are juniors, and should continue to rise in the distance swimming scene as they train together next year. They were two of the stars that led Highland Prep to a runner-up finish, well behind Bolles.

Perhaps Missy will break the american record in the 200 back on day 3 in Minneapolis, but for now the 2 best individual performances from this week-end in USA are the 45.34 from Ryan Murphy in the 100 back at these Florida high school state championships and the 20.94 from Michael Andrew, only 13, in the C-Final of the 50 free in Minneapolis. This is a great weekend of swimming.

I hope Ryan Murphy will swim as well in Istanbul at the next short course world championships. If he’s at this level I think he can play the medals in the backstroke races.
Braden, could you post the videos of these records if you have them? It would be cool.