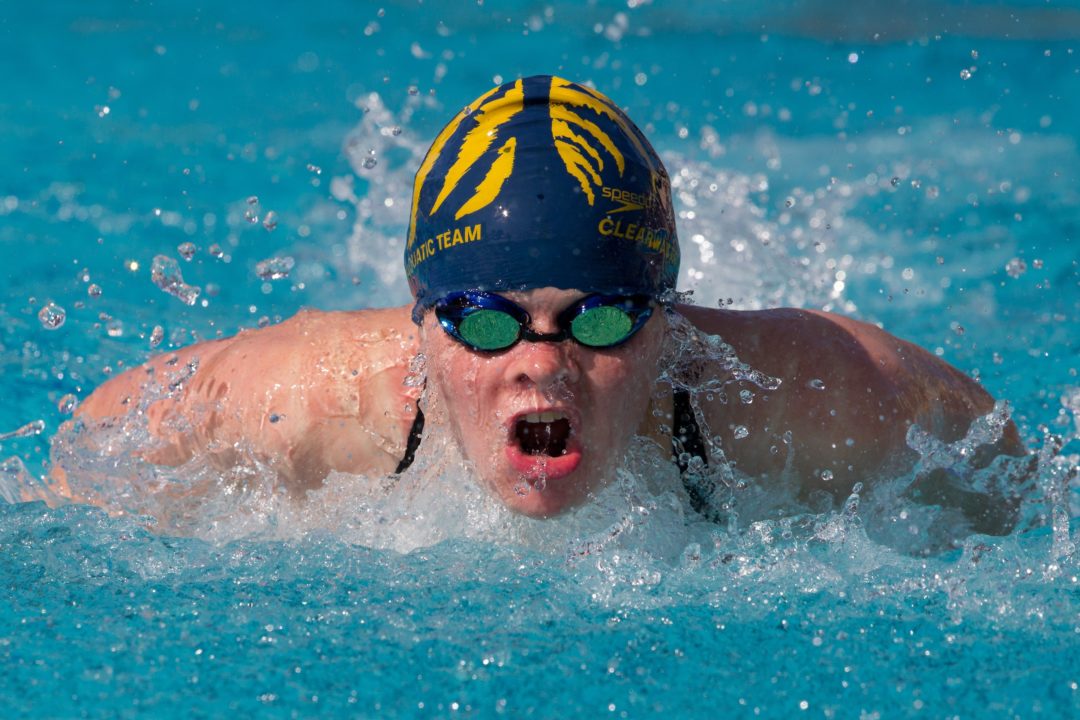 The teenage women dominated the highlights on day 2 of the Minneapolis GP, including Becca Mann who moved to 3rd all-time in her age group's history. (Photo Courtesy: ©Tim Binning/TheSwimPictures.com)

Missy Franklin is making a statement in Minneapolis this week, blowing away her previous personal bests. Given the early timing of this meet, it would appear as though we’re starting to enter the territory where Franklin is no longer “better in long course than short course.” She now looks just as good in both, and in two years with Teri McKeever at Cal should shred the yards record books.

Her first win came in the 50 free. This event is a bit shorter than she usually likes to go at the international level, but certainly one she’ll have a chance at swimming frequently on relays in college. With this swim knocking a tenth off of her personal best, this gives her another time that moves her squarely into NCAA A-Final range.

Minnesota’s Erin Caflisch took 2nd in that race in 22.75 – that time is just a tenth away from what she went at the Big Ten Championships in the spring. Becca Weiland was 3rd in 22.88, continuing what has been a decent run for the Gophers this weekend. Another Gopher sophomore Blake Zeiger was 4th in 23.25. Expectations might’ve ridden a little bit higher of her dipping under 23 seconds after a best time in the 100 fly on Friday.

In Franklin’s second event of the night, the 100 backstroke, she just missed the National Age Group Record with a 50.97 win. Her future teammate Rachel Bootsma was a bit faster in 2011, which means that Franklin will at least have a small carrot to chase at the Colorado State Championship meet (she should easily better the 200 free high school record).

There was nobody really to run down in this race, but 16-year old Mickayla Hinkle from the St. Croix Swim Club still impressed as the runner-up. She swam a 53.55, which is 8-tenths better than her lifetime best coming into this meet. That’s another great young backstroker out of the state of Minnesota, following in Bootsma’s footsteps, but there’s an even more interesting legacy here: her coach, Olga Espinosa, was a teenage Olympian for the Czech Republic in 1992 (and again in 1996). She has some expertise in the training of a young swimmer of this level. (See Katrina Radke’s interview with Espinosa here).

She’s only a sophomore, but Espinosa is a former Golden Gopher and Minnesota head coach Kelley Kraemer has likely already started formulating a plan for her recruitment. One of his current swimmers, Tess Behrens, was 3rd in this race in 53.67.

Franklin ended her day with a 1:44 200 freestyle on the Stars’ 800 free relay that finished 3rd overall.

Aside from Missy, there’s another young swimmer named Becca Mann in Minneapolis who though built differently from Franklin, and although having a different event specialty than Franklin, is reminiscent in that she’s really exploding at 14-year olds. That’s the same age at which Franklin first started making international squads.

Mann started Saturday evening’s session off with a 1:57.14. That makes her the 3rd-fastest swimmer in age group history, though it appears that Mary T. Meagher’s 1979 record will survive yet another furious challenge.

Dagny Knutson looked solid on day 1 of this meet, but she looked even better on day 2 as she placed 2nd in 1:58.24. That’s just a tenth away from her best time, and that was a time set in 2009 when she was at the peak of her young career. Knutson looks like she’s shifting her focus in her return from significant time away toward a trial in the butterfly events. She’s been a 2:10.9 in the long course edition, so she definitely has the ability.

The endurance is still coming back: she basically gave this race away to Mann entirely on the last 50, a full second behind. 13-year old Isabella Rongione took 3rd in 2:02.52.

In Mann’s other swim of the day, the 500 free, she didn’t win but she still posted an impressive personal best of 4:40.15 for 3rd-place. Swimming in behind defending USA Swimming National Champ Ashley Steenvoorden (4:38.45) and Olympian Chloe Sutton (4:38.47), that’s a very good result. Just as in the 200 fly, that’s now the third-best time in age group history.

Steenvoorden and Sutton, as the final results indicate, where nose-and-nose for the whole 500 free.

In the women’s 200 breaststroke, Minnesota freshman Kierra Smith won in 2:08.11 – the best time in the NCAA this season (even better than superstars like Caitlin Leverenz and Breeja Larson) and it’s not even close. Smith said just before this meet on a podcast with Canadian coach Mike Thompson that she was still feeling her way through yards, and she wasn’t quite sure yet what a good time meant in yards. A first hint: this was a very good time.

She dominated former Wisconsin All-American Ashley Wanland in every length of this race, pulling further-and-further away as Wanland was 2nd in 2:11.47. Smith’s two training partners, Haley Spencer and Jillian Tyler, both scratched this race (Spencer in finals, Tyler in prelims), so those two were a mile ahead of anyone else.

Smith will be focusing on Canada’s World Championship Trials this spring, which come shortly after NCAA’s, so that could affect her final collegiate performances a bit at year’s end, but she still looks very much like an NCAA A-Finalist.

On the men’s side of the pool, Ryan Lochte out-raced fellow National Team’er David Plummer in the men’s 100 backstroke. The two were about even through the first turn, but turns are where Lochte is so good and he started to pull away. Ultimately, Lochte won in 46.21 and Plummer was 2nd in 47.24. Good times in context, though I think this really highlights how impressive the 45.3 that Ryan Murphy swam at the Florida HS State Championship meet the same day was.

Russia’s Arkady Vyatchanin was 3rd in 47.82, followed by Pedro Oliveira (48.26) and Ben Hesen (48.42). Hesen will be representing the US at the Short Course World Championships in December and it looks like he still has some work to do. He started out very fast, but faded on the back-half.

Jimmy Feigen won the men’s 50 free in 19.73. He’s now a post-grad, but was last year’s NCAA Champion in the event so it’s no surprise he’s faster than any college swimmer has been this season. His training partner Garrett Weber-Gale was 2nd in 20.11, with Minnesota’s Derek Toomey touching 3rd in 20.17. That’s actually his 2nd 20.1 of the season, so it’s a bit surprising that with Minnesota resting this week he didn’t dip under 20 seconds in his home pool.

Not often at these Grand Prixs is the C-Final winner notable, but this time it was 13-year old Michael Andrew in 20.94. He’s got another year-and-a-half in the age group, that’s already the 7th-fastest time by a 13-14 ever, still just shy of the record of 20.79. His football season is now over, and he’s back focused on swimming; this gives him an ever-coveted Winter Juniors qualifying standard at only 13 years old.

Andrew also won the C-Final in the 200 breast in 2:07.15, showing off what he expects to be a much bigger impact this year on the longer distances. That 200 A-Final was won by Mike Alexandrov in 1:55.38. This race took a bit of a strange turn – the battle between Alexandrov, defending NCAA Champion Carlos Almeida, and U.S. Olympian Scott Weltz didn’t even come close to happening. Almeida was a “NS” in prelims, and Weltz limped into finals with a 2:04 and then appears to have scratched that final.

minnesota men look flat, especially compared to how well they swam versus iowa

Missy is phenomenal so early in the season. Based on her times this weekend I think she can swim 1.48 in the 200 back on day 3. If she wants it. Just a thing for the announcer in the pool who is very good, Missy has won 4 gold medals at the olympic games, not 5.
Ryan Lochte doesn’t look as tired as usual for races in-season. He swims very good times. The show will be for Istanbul in December. He’s so strong in short course.
Michael Andrew has swum a fantastic time in the C-Final of the 50 free. 20.94 is magic for his age. He will destroy the NAG record.

Lochte took a break after the Olympics so is not as worn down at this time of the year.