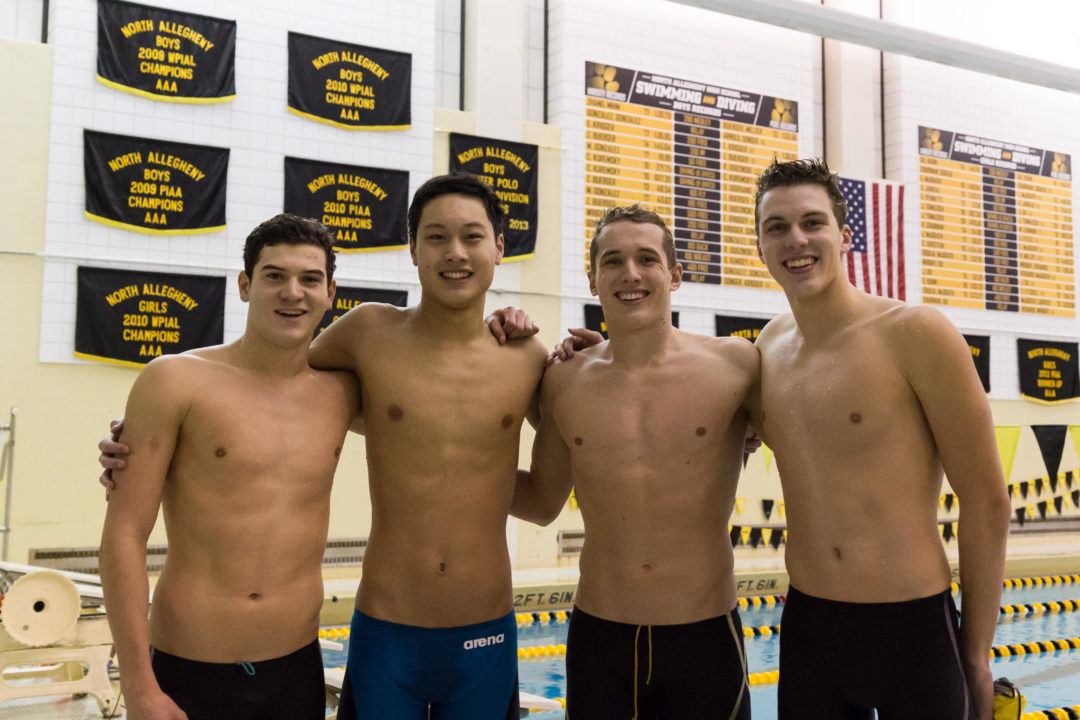 Just like Destin Lasco did not too far away in New Jersey, the boys of  North Allegheny High School in suburban Pittsburgh jumped right from the USA Swimming Winter Junior Championships – East back into their high school season and came away with National Record-breaking swims.

Specifically, North Allegheny broke both the 200 and 400 free relays – within 20 minutes at a dual meet (pending paperwork and pool measurement).

First, the team of Mason Gonzalez, Andrew Zhang, Rick Mihm, and Jack Wright combined for a 1:20.46 in the 200 free relay. That broke the National Public High School Record that was set by North Allegheny in March at 1:20.95. That relay from March included Wright, Gonzlaez, Mihm, and Eben Krigger, who has since graduated and now swims at Penn State.

The group was an even-faster 1:19.83 a week ago in Knoxville, with each of the 4 swimmers posting better times at that meet.

Shortly thereafter, in an exhibition swim, the same group was faster than the public school record in the 400 yard free relay as well – and joined a rare group of high school relays that have been under 3 minutes. In that race, the group swam a 2:57.59, which crushed the old public school record of 2:59.00 done by Granada High School in California in 2014. This is another relay North Allegheny won at Winter Jrs – East, where they swam 2:55.96.

The Bolles boys are again the standard in the 400 free relay – the group of Murphy, Santo Condorelli, Josh Booth, and Schooling combined for a 2:54.43 in 2012.

While the 4 swimmers of the North Allegheny club relay all raced together in the relays at Winter Jrs, they were not representing their high school in that race (they were representing the USA Swimming club team of the same name), and so those swims weren’t eligible for relays.

6
0
Reply
JP input is too short
Reply to  amazing

It’s carryover from Jr. Nats taper. I’m sure they’ll be jumping into some intense Christmas break training next week or so 😛

Are any of these swimmers going to be Pitt Panthers in the future??

Looks like Gonzalez is committed to Stanford and Zhang to Northwestern. Wright is class of ’19 and Mihm class of ’20.