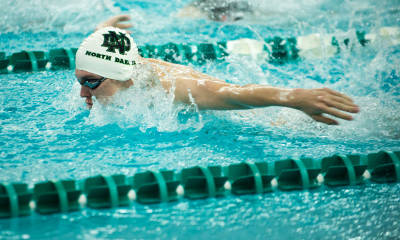 The University of North Dakota will cut its men's and women's swimming and diving programs as part of a restructuring plan within the athletic department. Stock photo via Eric Classen, UNDsports.com

The University of North Dakota will cut its men’s and women’s swimming and diving programs as part of a restructuring plan within the athletic department.

The school announced the move in a press conference this afternoon, though news of the suspected cuts leaked several hours earlier. Brad Schlossman, a reporter with the local Grand Forks Herald, tweeted a photo of the school’s press release, included below:

Official press release on the cutting of UND women's hockey and both men's and women's swimming. pic.twitter.com/htXjB4dUbe

The release announces that women’s hockey will be discontinued, as well as the men’s and women’s swimming & diving programs.

“This is a day I had hoped to never revisit, but here we are,” athletic director Brian Faison said in the press conference. The school is now down to just 17 sports left in its athletic department.

It’s been a bit of a will-they-won’t-they with North Dakota and its swim teams for the past year. The school originally looked at cutting swimming as one of up to four sports last fall in an effort to focus financial resources on fewer teams to make those teams more successful. But the school faced lots of public pushback, including a Facebook post from Olympic hero Katie Ledecky, whose mother grew up in the state of North Dakota as a swimmer. About a week later, the school made an announcement saying that it would not be cutting any sports.

University president Mark Kennedy called the idea of cutting any of the school’s 20 sports “a closed conversation as far as I’m concerned.”

But the Grand Forks Herald now reports that Kennedy has asked the school’s athletic department to get rid of $1.3 million from its budget in response to an anticipated drop in funding from the state.

North Dakota competes in the NCAA’s Division I and in the Western Athletic Conference for men and women, with both programs taking 5th this past year.

cutting because of title ix is understandable, but if the reason is really because of the budget, how much does cutting swimming really save them? How much does swimming put a dent in that 1.3 million?

Away meets, hotels, food, equipment, buses etc really adds up. I don’t ever agree with the cutting of a program but it’s not cheap to run a program.

I assume travel is pretty expensive for them.

Yeah I get it the travel expenses add up. I’m just wondering how much and if there were outside donors willing to intervene. When I hear cutting because of budget it reminds me of when UC Davis men’s team was cut because of budget, and they raised all the money for the team to survive but were cut by the administration anyways

team raised $22000 for locker room renovations (that better be refunded). This isn’t about $…..Faison is on his way out the door, and this is HIS Legacy. Women’s hockey was not even considered in the last round….not sure how ONE GUY can decide something that affects 90-100 student athletes, AND THEIR PARENTS.

The tuition/etc that the mostly non scholarship team pays more than makes up for these expenses. Womens Hockey was the big one…but to “soften the blow” he thru in swimming/diving. Faison should be gone…Kennedy should reconsider. Poor kids have tests and registration this week…and scrambling to set up visits, etc. Terrible!

Why does swimming have to be sacrificed because of administrative oversight?

looks like i wont be applying here swimming is my life and they just cut it wow!

This isn’t going to be good.

Just wondering, if a commit has signed to North Dakota at this time and hasn’t enrolled, will their NLI become void, allowing them to swim somewhere else with no penalty?

WaitAMinute – yes, that’s correct. They can sign somewhere else with no penalty.

I know one of their top recruits who is devastated. The coaches called right away and said her NLI is now null and void and free to find another school. It’s going to be very hard to get a scholarship this late in the process. Feel terrible for the coach and current swimmers. Coach Chris was making great strides improving the program. Hope he lands on his feet quickly.

Plus his wife just gave birth to twins. Faison needs to go, NOW…and they need to get corporate sponsor to step in. With the conference change, swimming/diving does not cost that much…used warm ups, etc. Also, what will happen to the Wings up $ that they raised $22700?

Yes, that’s right. I am (was?) one of the commits, and Chris called and said that the NLI’s are null and void and he’ll help us in anyway to find somewhere. But like Stuartc said, there probably isn’t a lot of money or spots left on orther teams.

Take a gap year and enjoy being a kid.